Active coronavirus cases have fallen substantially in regional Victoria but opinions remain divided about whether it should open up faster than the state government’s flagged timeline.

Premier Daniel Andrews raised the prospect on Thursday that regional Victoria could move further towards opening up as early as next week although he stressed there were no guarantees.

There were no new infections in regional Victoria on Thursday with 72 active cases compared to 82 the day before. 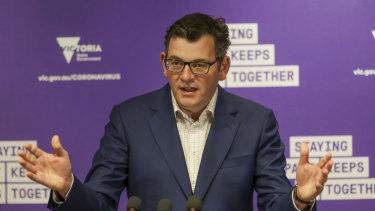 Premier Daniel Andrews has flagged regional Victoria may move towards reopening further at the end of next week. Credit:Wayne Taylor

"As it stands now, and I can't guarantee that this is the case, but if the trend continues – and the numbers are very promising – we'll be able to take a step or steps as early as towards the end of next week," Mr Andrews said.

He praised the “amazing efforts” by regional communities to prevent the spread of the virus.

“That's again, pleasing to see those numbers from a very high base, they've stabilised, they've steadily fallen and now we're very pleased to be able to report that there were no new cases in regional Victoria overnight.” 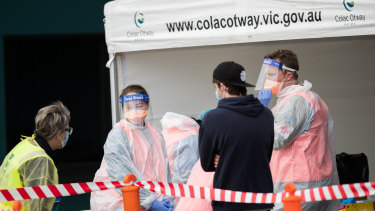 Colac has the greatest number of infections in regional Victoria with 29 cases on Thursday. Credit:Jason South

Colac Otway Shire has the greatest number of regional cases with 29, followed by Latrobe on 13 and Greater Geelong with 11. The 14-day average fell to 4.5 in regional Victoria on Thursday.

City of Ballarat mayor Ben Taylor said regions that had recorded no new cases over 14 days should be allowed to move immediately to the final step, which will allow hospitality businesses to serve patrons indoors with capped numbers.

On Monday regional Victoria is already scheduled to move to step two, which will allow outdoor public gatherings with up to five people from two households.

In regional Victoria case numbers must fall to fewer than five on average over 14 days and zero mystery cases to move to step three, which will allow outdoor dining in restaurants and cafes and public gatherings up to 10 people outdoors.

There will be no restrictions on leaving the house and tourism accommodation can reopen with restrictions in the third step. 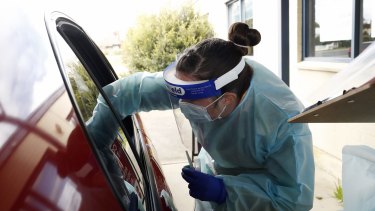 Drive through testing in Ballarat where current active cases have fallen to zero. Credit:Getty Images

Cr Taylor said the government’s threshold of no new cases for 14 days statewide to reach the final step was too onerous, arguing many parts of regional Victoria had recorded no cases for extended periods.

“Just that opportunity to get business up and going, especially hospitality and retail would really help regional Victoria get back to normal,” he said. “I fear for the economy in Ballarat.”

The final step is set to be introduced on November 23.

“We know people in the regions are really wanting to support each other,” she said.

But Hepburn Shire mayor Licia Kokocinski said the timetable should not be rushed. The shire has no active cases and only two in total.

“If the virus hits these small towns and small shires we’re effectively wiped out,” she said. “We don’t have the kind of health services you do in Melbourne.”

Bass Coast Shire chief executive Ali Wastie said it was an unacceptable risk to open up too quickly.

“The last thing we want is for regional Victoria to come out of lockdown and go into even harder restrictions,” she said.

Barwon Health infectious diseases director Eugene Athan said the Colac outbreak had been brought under control even though widespread testing may show up some additional cases.

“Certainly things are contained in our region. There’s no doubt about it,” he said.

Get our Coronavirus Update newsletter for the day’s crucial developments at a glance, the numbers you need to know and what our readers are saying. Sign up to The Sydney Morning Herald’s newsletter here and The Age’s here.

END_OF_DOCUMENT_TOKEN_TO_BE_REPLACED

END_OF_DOCUMENT_TOKEN_TO_BE_REPLACED
Recent Posts
We and our partners use cookies on this site to improve our service, perform analytics, personalize advertising, measure advertising performance, and remember website preferences.Ok