Desperate relatives of Covid patients in Brazil have been queuing for hours to fill their loved-ones’ oxygen tanks while a new mutant strain of the virus ravages the country.

Amozonas state has been inundated with cases of the new variant and doctors at hospitals in Manaus, the rainforest’s largest city, are being forced to decide which patients should get the dwindling oxygen.

From dawn to dusk, family members queued up outside the Carboxi oxygen plant during torrential downpours and sweltering humidity on Tuesday.

They arrived with heavy green tanks to be filled with oxygen and then rushed back to their ailing relatives, laying the colossal cylinders across the backseats of hatchbacks and on truck beds.

Even as Amazonas welcomed the support, Bolsonaro lobbed critiques at Maduro.

‘If you want to offer us oxygen, we will receive it without a problem,’ Bolsonaro said Monday. ‘But he could give emergency aid to his people too, right? The minimum wage there doesn’t buy half a kilo of rice.’

Brazil has recorded 210,000 deaths from coronavirus, the second-highest toll after the United States. 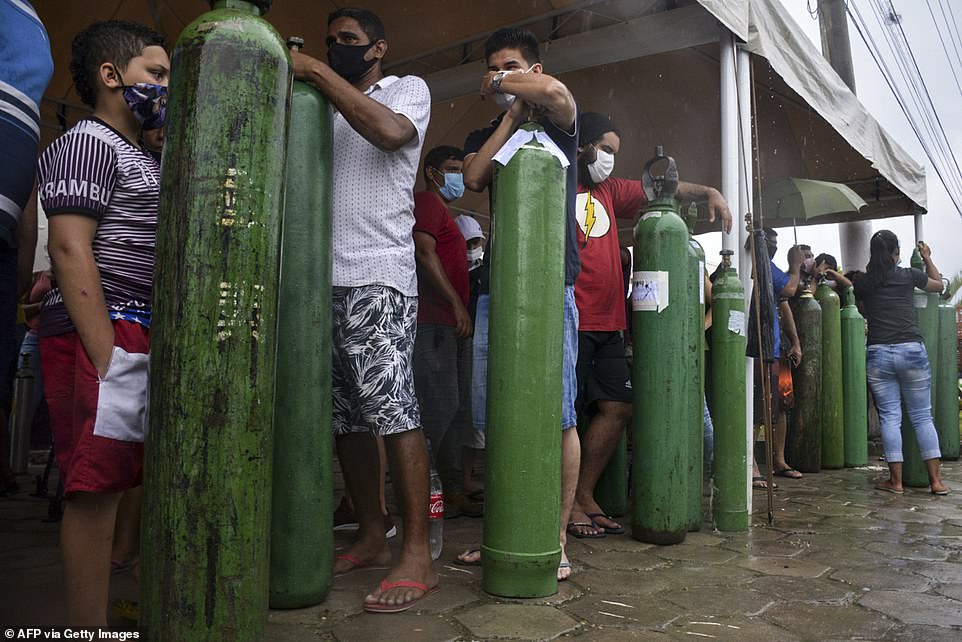 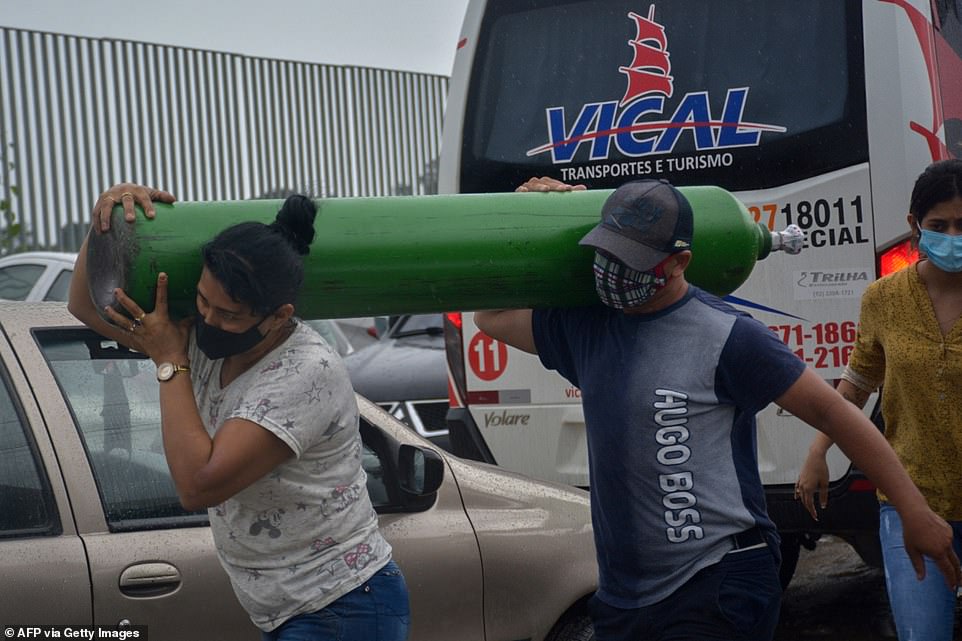 They arrived with huge green tanks to be filled with oxygen and then rushed back to their ailing relatives, laying the colossal cylinders across the backseats of hatchbacks and in truck beds 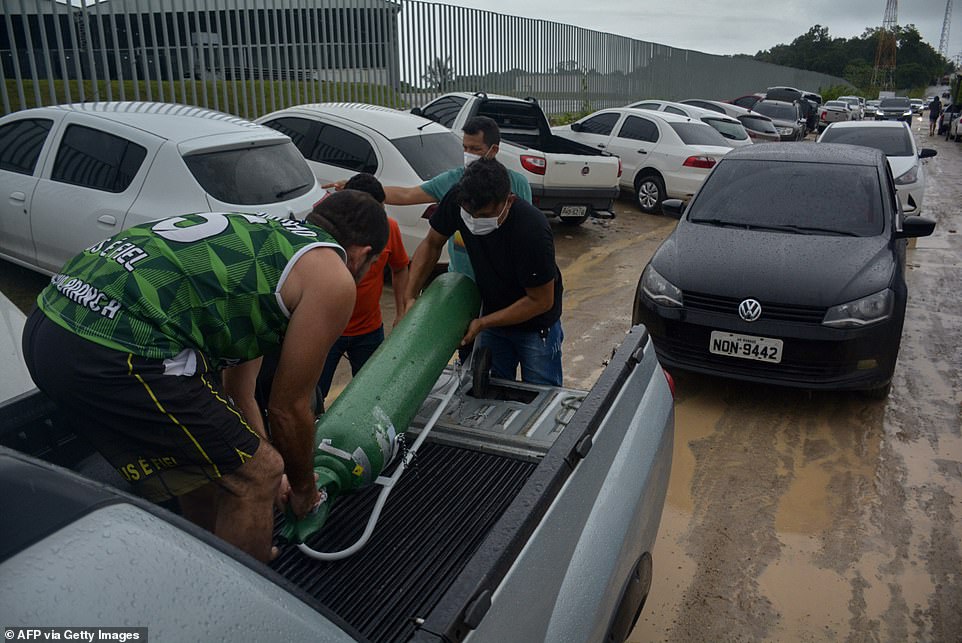 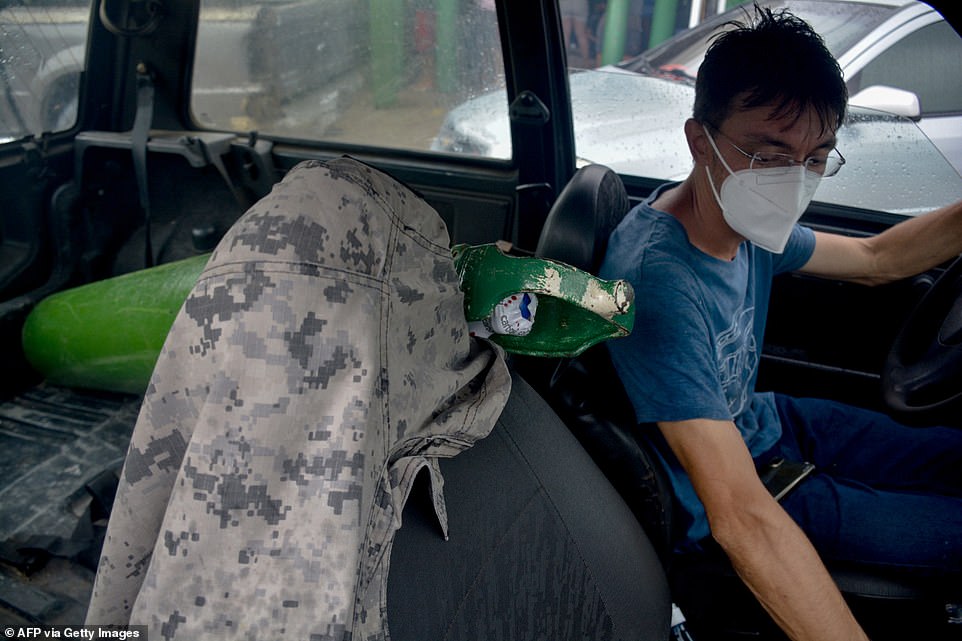 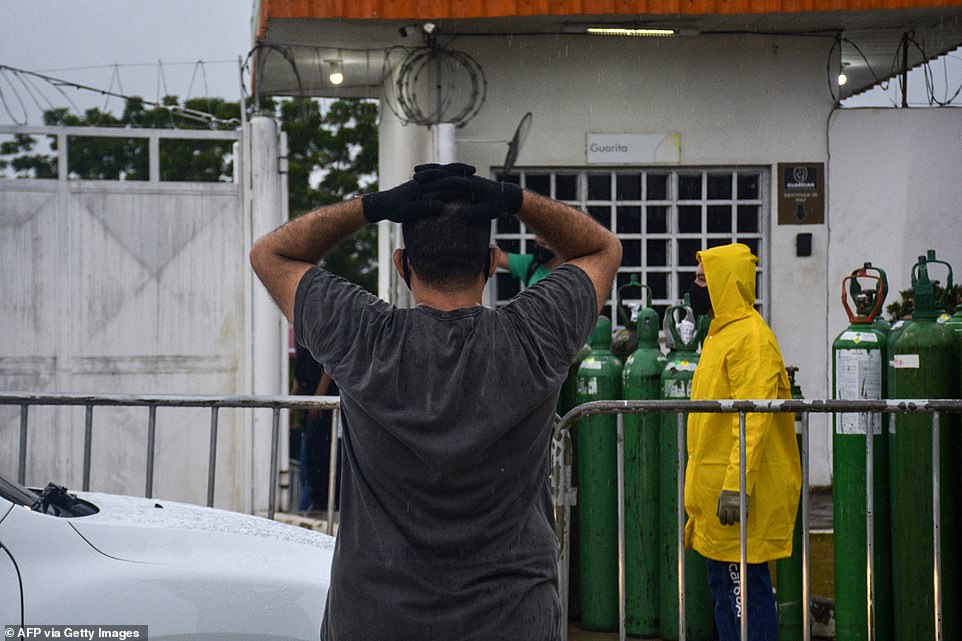 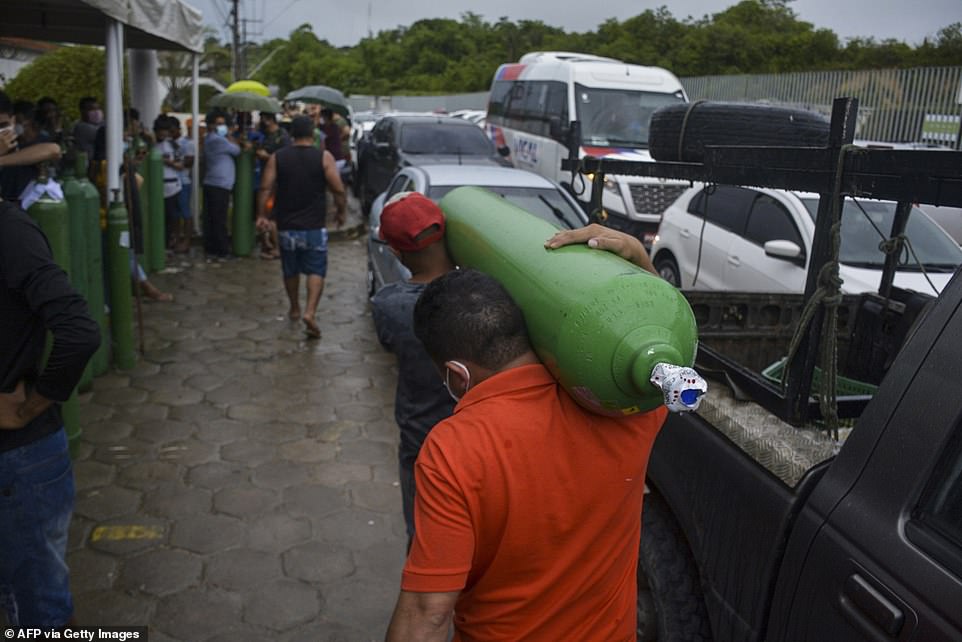 Amazonas’ government transferred 18 patients by plane to Goias state Monday. The state had already transferred 112 patients to be treated in the Federal District, Brasilia, and other states, according to the state’s health secretariat.

Hospitals in Manaus, a city of 2.2 million people, have admitted few new COVID-19 patients, causing many to suffer from the disease at home and some to die.

And many doctors in Manaus have had to choose which COVID-19 patients can breathe while desperate family members searched for oxygen tanks for their loved ones.

The city is receiving an average of four Brazilian air force flights per day to bolster oxygen stocks, along with one shipment per day from the city of Belem near the mouth of the Amazon river, according to officials.

But despite the oxygen shortage, the first doses of the covid vaccine have started to be administered in the state which is home to many of the country’s indigenous people.

Amazonas Governor Wilson Lima led a ceremony that kicked off the vaccination campaign on Monday night.

Vanda Ortega, 33, a member of the Witoto ethnicity and a nurse technician, received the first dose of CoronaVac, a vaccine developed by Beijing-based biopharmaceutical company Sinovac.

‘I want to thank God and our ancestors,’ said Ortega, who is also a volunteer nurse in her Indigenous community.

Brazil on Monday began rolling out its national immunisation program with 6 million doses of CoronaVac in almost a dozen states, and hopes to receive 46 million doses up to April to distribute among states. Amazonas received 256,000 doses. 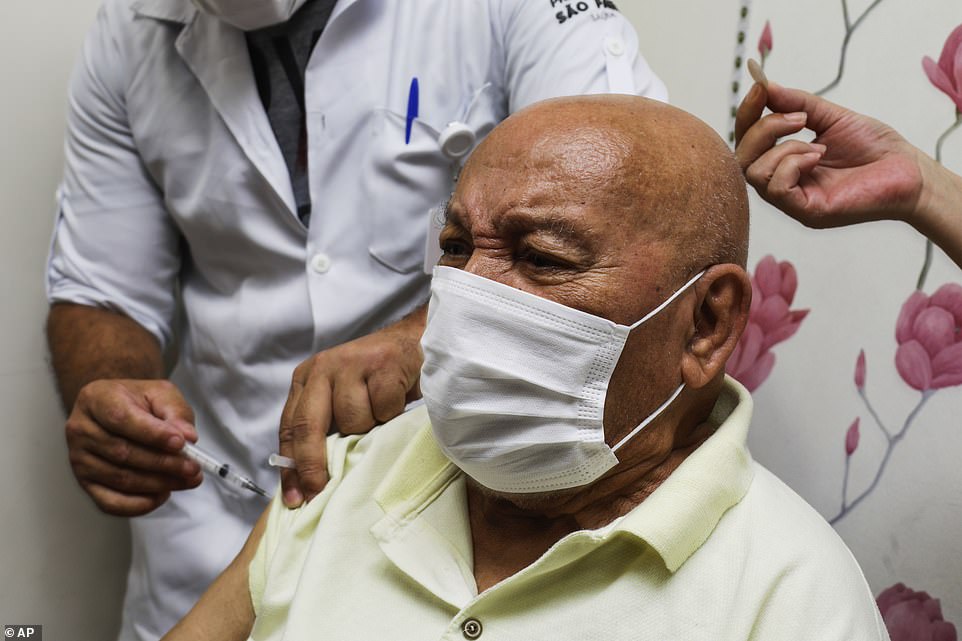 Jose Pereira Lima gets his shot of the COVID-19 vaccine produced by China’s Sinovac Biotech Ltd., during the start of the vaccination in elderly people who live in public shelters, in Sao Paulo, Brazil, Tuesday 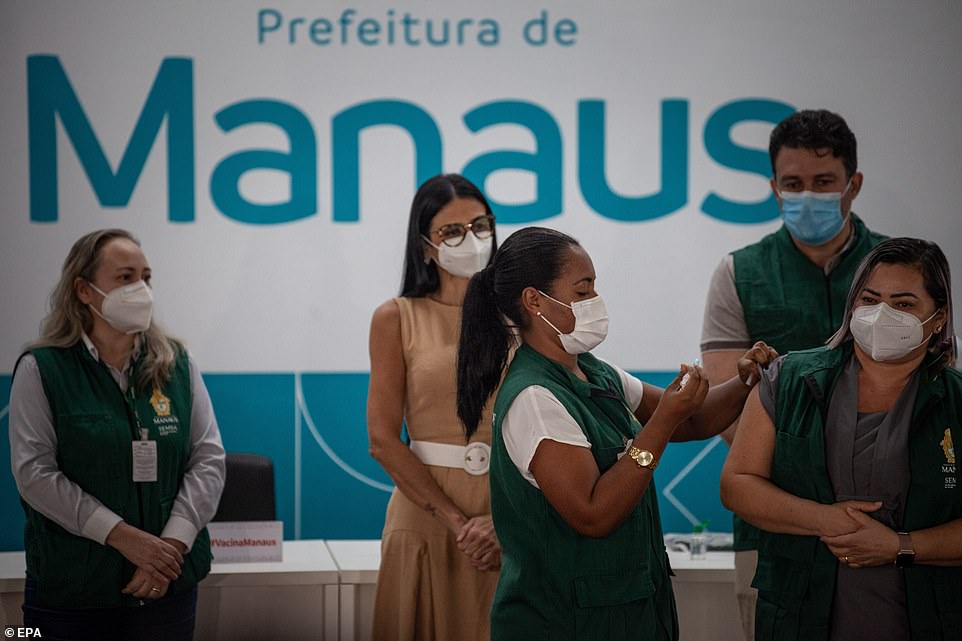 The nursing technician Rosenira Magalhaes receives the vaccine against covid-19 during a ceremony at the Mayor’s Office of Manaus, Amazonas state, Brazil, 19 January 2021 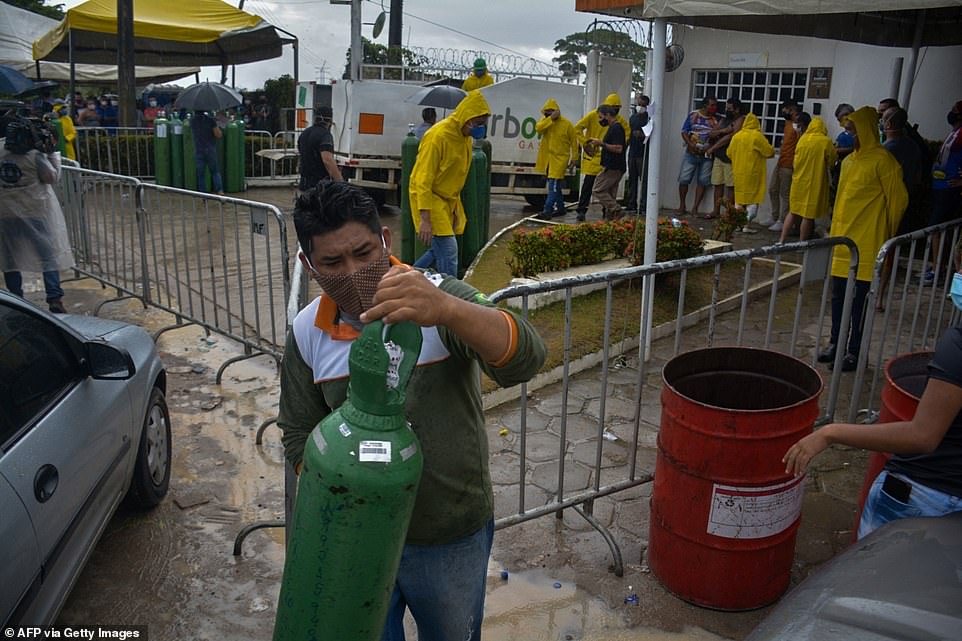 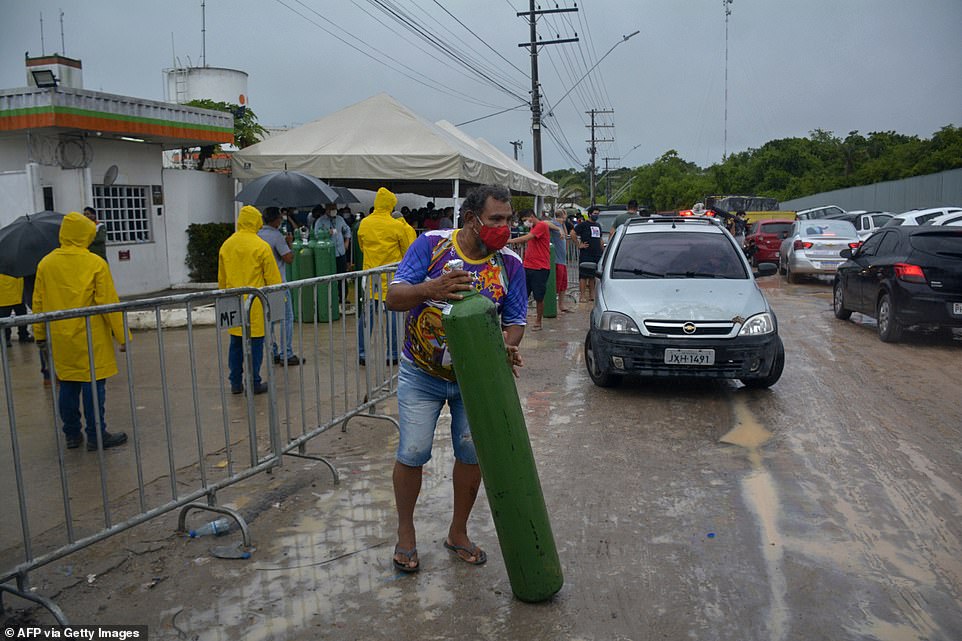 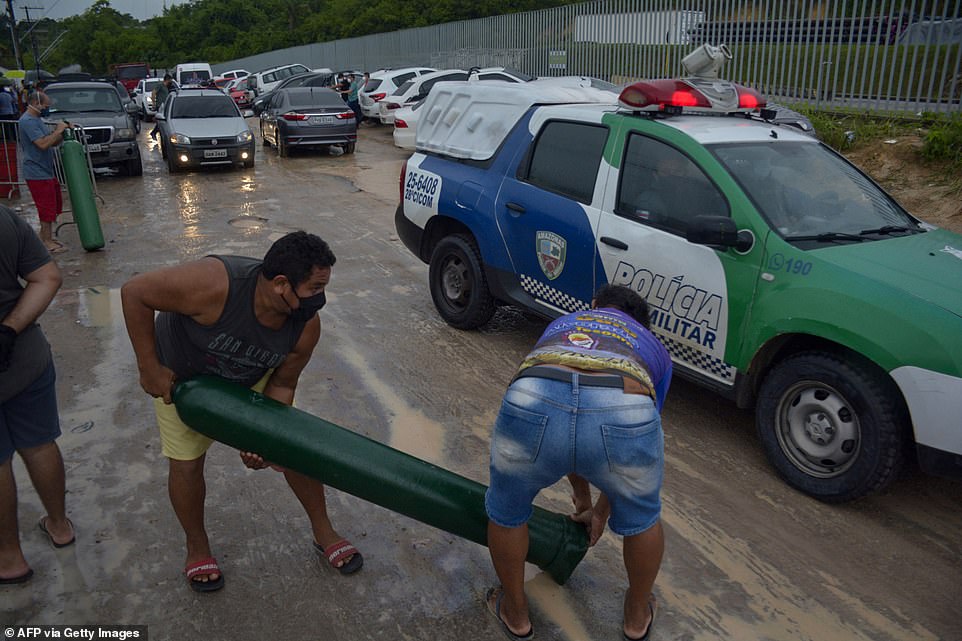 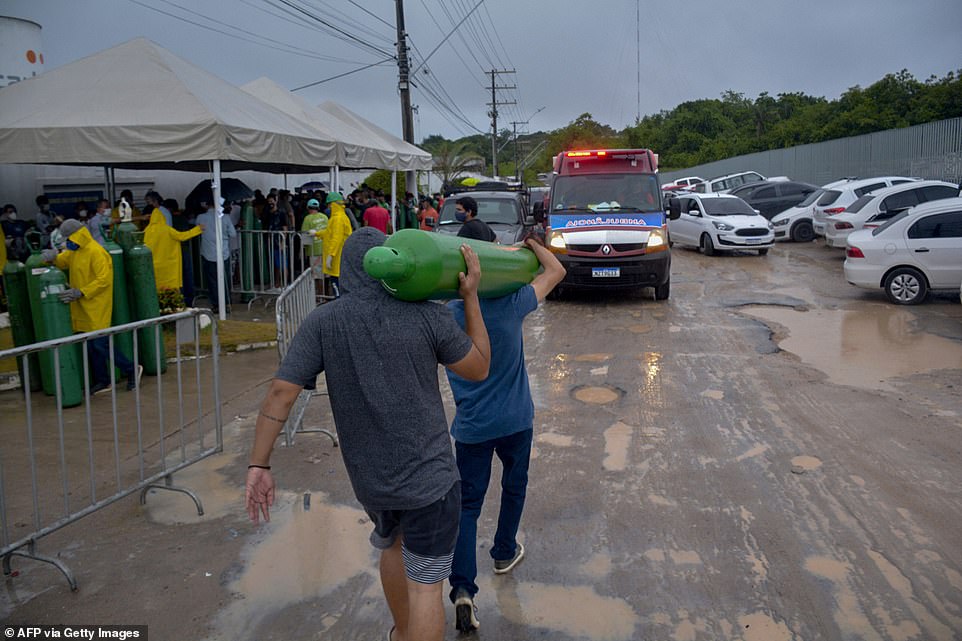 The state government on Tuesday started distributing the doses to municipalities.

The priority in the first vaccination phase will be health workers, elderly people above 80 years old, and Indigenous people in about 265 villages.

Amazonas has recorded at least 232,000 cases of the virus since the start of the pandemic, according to official figures.

The health system collapse in Manaus, which had already gone through a critical situation last April, generated criticism of the government for allegedly not having anticipated the problems.

Thousands of people protested in cities across Brazil on Friday, the same day that images emerged showing desperate relatives searching for oxygen for loved ones.

Health Minister Eduardo Pazuello admitted Monday that the federal government knew on January 8 that oxygen supply could run out in the Amazon capital, a week before people died in intensive care beds.

The speed of hospitalizations increased significantly in the last days and made the supplier company unable to meet demand, Pazuello said. 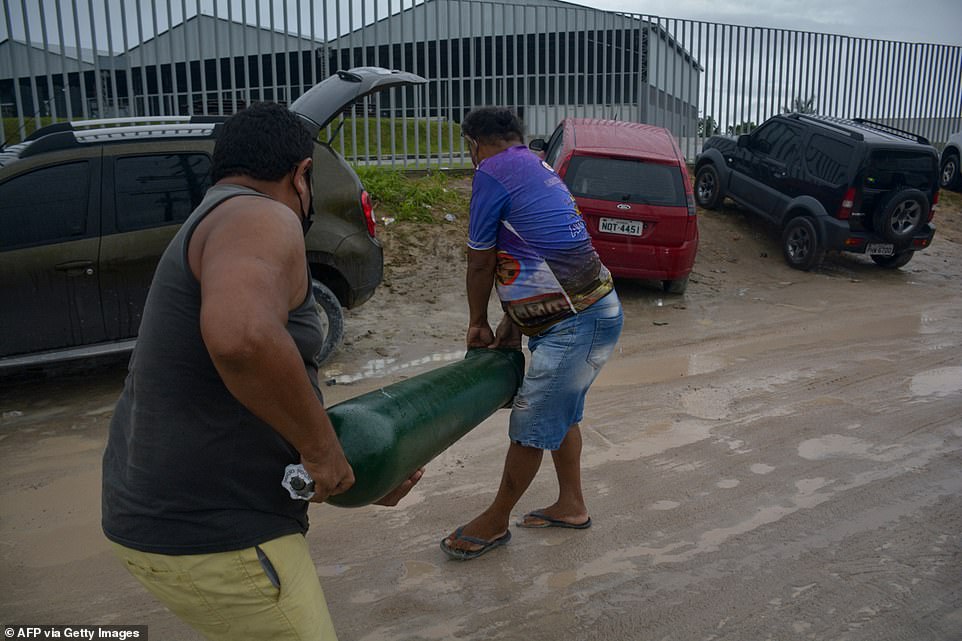 Relatives of patients infected with Covid-19 leave after queuing for long hours to refill their oxygen tanks at the Carboxi company in Manaus, Amazonas state, Brazil, on January 19 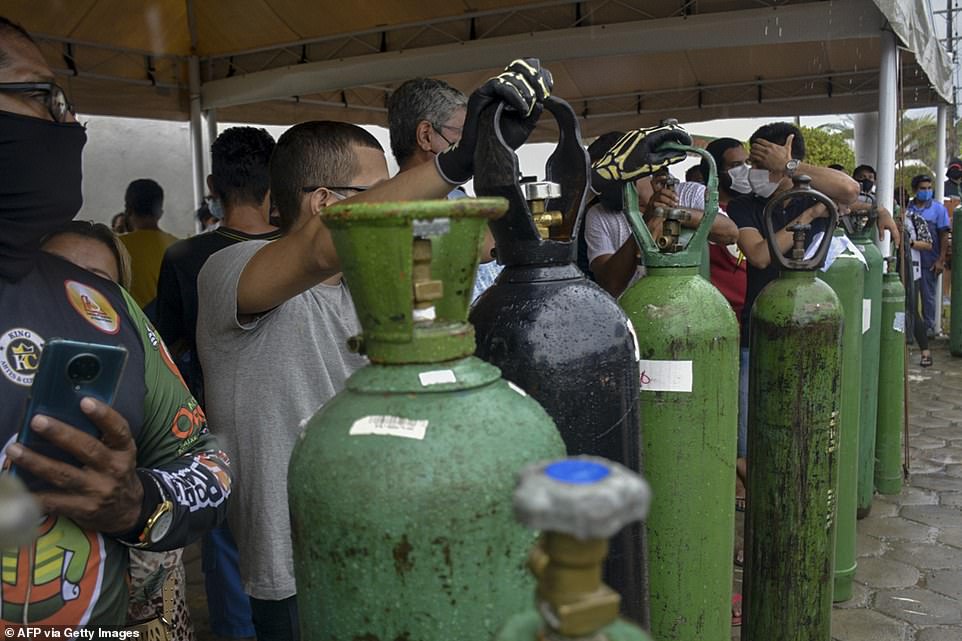 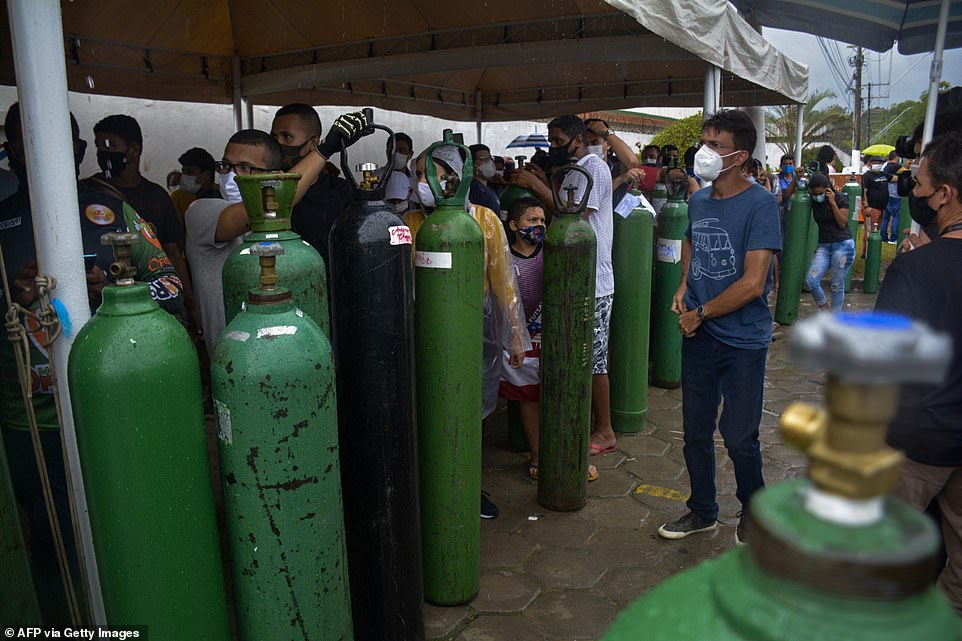 People queuing for oxygen in Manaus on Tuesday 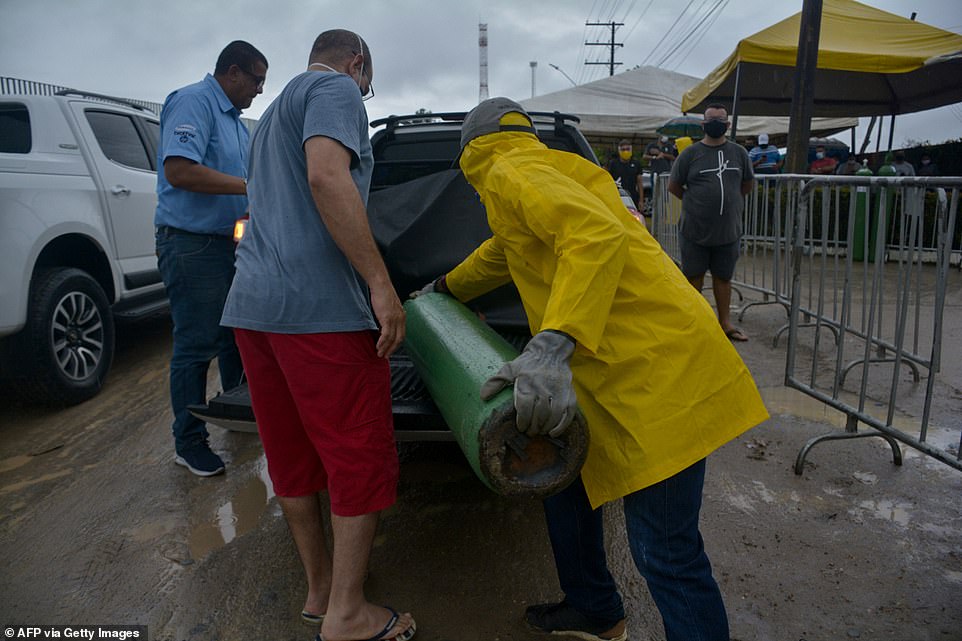 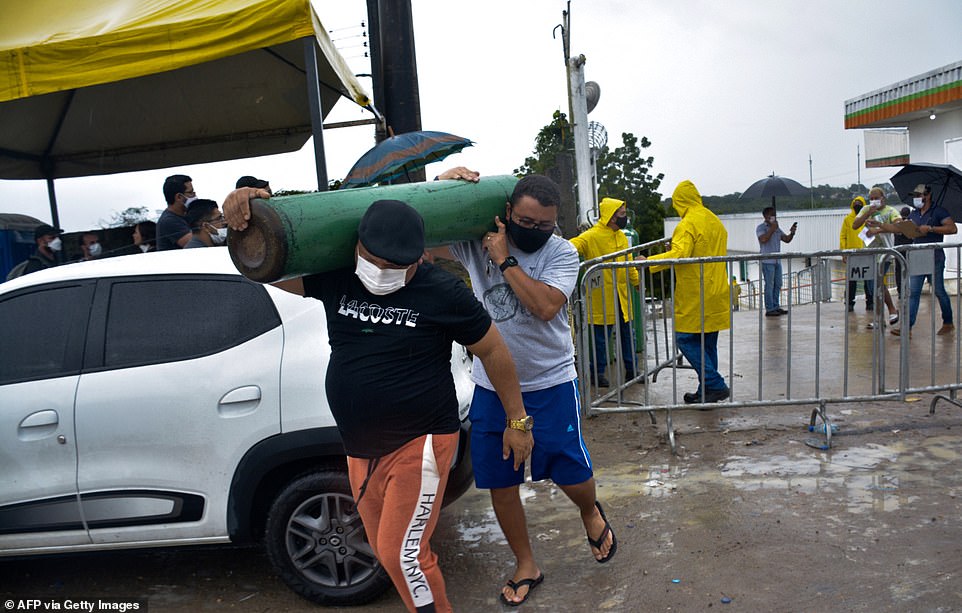 Two men carry a huge tank of oxygen on their shoulders 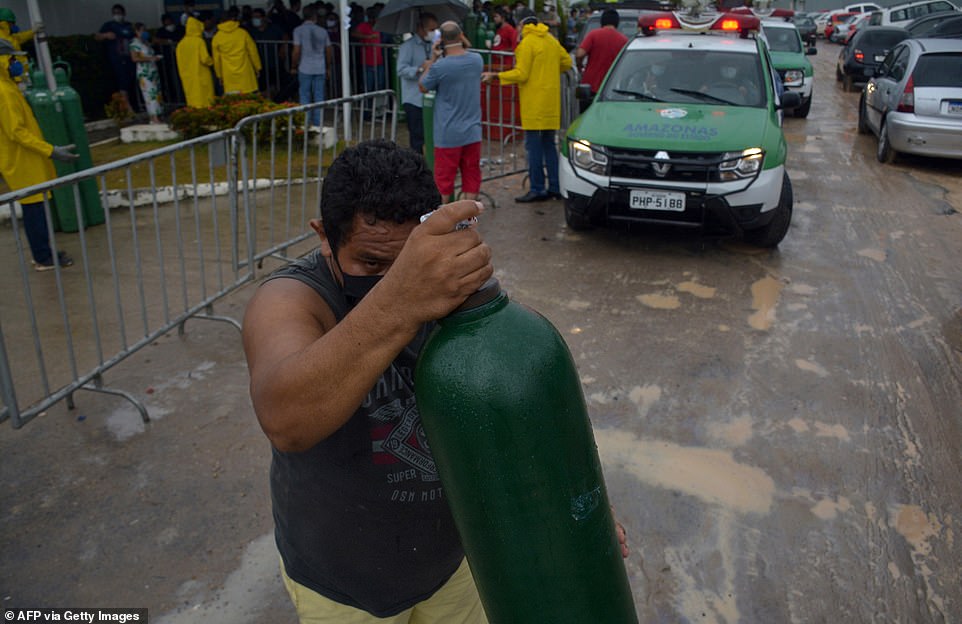 A new strain of the coronavirus has been circulating in Manaus. There have been concerns about greater transmissibility or potential for reinfection, although such possibilities remain unproven.

A positive coronavirus test doesn’t reveal which variant of the virus the patient has, but some epidemiologists have speculated the new strain has been at least partially responsible for driving Manaus’ second wave.

Jesem Orellana, an epidemiologist at public research institute Fiocruz Amazonia, said the rise of deaths in Manaus is not necessarily due to the coronavirus’ new mutation.

‘Since October, there has been a problem of overcrowding in hospitals. People don’t get to arrive early and end up being admitted late to the hospital, in a more deteriorated state,’ Orellana told The Associated Press.

‘Everywhere there is a chaotic situation, lethality is higher, but not necessarily due to the severity of the infectious agent, but rather due to other factors: there are fewer doctors, health professionals are tired, medications are lacking and ICUs are overwhelmed,’ Orellana added. ‘All this creates a climate that favors premature death.’