The boss of a security company hired to guard one of Melbourne's quarantine hotels told staff to "remember the Rydges" and ignore advice from the Health Department that masks and gloves were not mandatory.

Internal emails provided to the COVID-19 Hotel Quarantine Inquiry reveal one of the main companies feared that changing advice and lack of communication meant guards were vulnerable to COVID-19 from day one.

"Remember the Rydges! I'm not sure based on history that DHHS [Department of Health and Human Services] standards are what we should be aspiring to," MSS Security general manager Jamie Adams wrote of the quarantine situation at Rydges on Swanston days before an outbreak occurred at the Stamford Plaza in June.

As the company and its subcontractors grappled with the outbreak a month later, a security supervisor told MSS heads that the Health Department kept changing the rules with respect to personal protective equipment and there was a lack of communication on who was and wasn't infected.

"My greatest fear as supervisor, were all our security guards compromised in contracting the coronavirus from the beginning of the quarantine program at all times?" the supervisor wrote.

The inquiry has heard 26 security guards who worked at the Stamford Plaza hotel contracted coronavirus after an outbreak in mid-June. 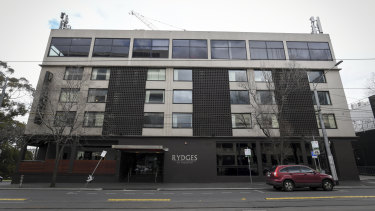 The Rydges hotel COVID-19 outbreak began on May 26, spreading from a family of four in quarantine to a hotel worker, six guards and a nurse.

Outbreaks among staff at the Stamford and the Rydges on Swanston drove Victoria's second deadly wave of COVID-19.

Emails released on Wednesday show MSS bosses were told five days before the first case at the Stamford Plaza that the Health Department had changed its advice on gloves and masks, making them recommended but not mandatory.

In further evidence during the inquiry hearings, MSS heads said the department had directed guards to stop using gloves to prevent cross-infection.

"This is still 'recommended', so we can enforce wearing of masks/gloves if you think it's necessary," MSS business manager Anthony Bandiera wrote to his boss.

"Stick with the current regime is my view," Mr Adams wrote back, along with his reminder about the Rydges outbreak, which had occurred the month before.

After the outbreak, which forced hotel staff and contractors into isolation, security personnel raised a number of claims with the heads of MSS about what could have contributed to transmission between quarantined returned travellers and the guards, including:

According to the emails, the Health Department brought in an infectious disease specialist after the Stamford outbreak to train the guards face-to-face in PPE after MSS told them there was a lack of formal training.

"Seems like an obvious step you think for the DHHS and something they maybe could have dreamt up themselves," Mr Adams wrote.

The department's outbreak squad, which investigated how transmission occurred at the Stamford, identified that hotel personnel and security contractors were not adequately educated in hand hygiene and PPE.

END_OF_DOCUMENT_TOKEN_TO_BE_REPLACED

END_OF_DOCUMENT_TOKEN_TO_BE_REPLACED
Recent Posts
We and our partners use cookies on this site to improve our service, perform analytics, personalize advertising, measure advertising performance, and remember website preferences.Ok