A RESTAURANT boss has banned a "rude" diner who left a scathing TripAdvisor review accusing him of "Ryanair style service".

Gary Usher hit back after the "intimidating" customer claimed staff did "not give a toss"' about customer service. 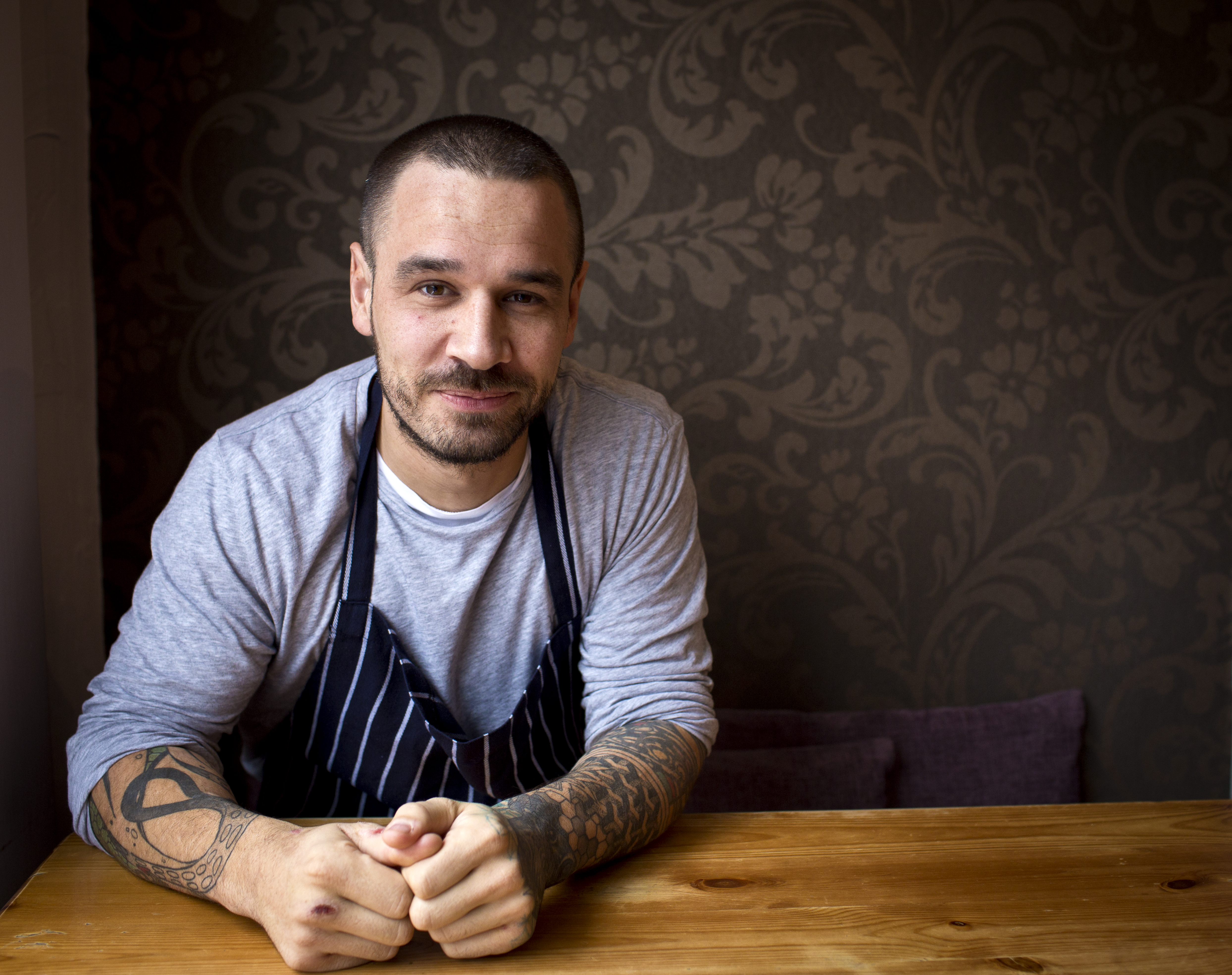 The unsatisfied diner, known only as Rob V,gave the Sticky Walnut in Hoole, Chester, a measly two-star review.

Writing on TripAdvisor, he said: 'The good news is that the food here is very, very tasty and deserves a high rating.

“The bad news is that the restaurant management doesn't give a toss about customer experience.

“I ate here on July 9 had a complaint that was dealt with badly enough by the manager that I wrote to the owner.

"A restaurant that aspires to offer fine dining experience but has lost the ability to empathise with customers and ignores them when they complain? That really is a shame."

But restaurant owner Gary was quick to respond to the moaning review, vehemently denying the diners claims.

He replied: “Rob you reserved a table on a Friday evening and agreed to a 1 hour 45 minute time slot.

"A standard practice, particularly on busy periods, that guests and restaurants worldwide agree to.

“After your dessert course the Manager, who you said "doesn't give a toss", gently reminded you that we would need the table back shortly. You ignored the Manager and proceeded to order another round of drinks.

"Perhaps if your party had arrived on time for your reservation this could have been avoided.”

As Gary continued his rant he pointed to the customers actions throughout the evening which included pointing in the managers face and threatening to call the owner.

He added: “You proceeded to tell the manager that they didn't deserve to be a manager and weren't qualified to be in the position.

"You, then threatened the manager by telling them that you would be contacting the owner because you know him and that Gary (me) would be appalled to know how you, "my friend", had been treated.

"The manager politely pleaded with your whole table to just listen whilst they explained. No one did.

"Every few months in a restaurant a rude guest will use the "I know the owner!" line to try and intimidate team members and bully them into thinking that they will get into trouble because they didn't look after the owner's 'friends' well enough.

"I did read your email. I did 'give a toss', but not about you Rob, but about the way you treated the team.

"So instead of replying to you we chose to block your number, and your Mum's, and put a note on our booking system to not accept any future bookings from you."

Mr Usher, concluded his response: "With regards to the Manager who "doesn't give a toss" they have managed Sticky Walnut for the last 8 years.

"Coincidentally the same length of time that Sticky Walnut has achieved a top 100 position in the National Restaurant Awards in the UK.

"I think that makes them both extremely deserving to be the Manager and absolutely qualified to hold that position."

The rant was not the first time that Usher has taken aim at a negative review – going viral in September last year where he asked the customer to “be kind” to his “humble neighbourhood bistro”.

It came after Usher, who has established five award winning restaurants, was dubbed Britain’s most controversial chef in a Channel 4 documentary. 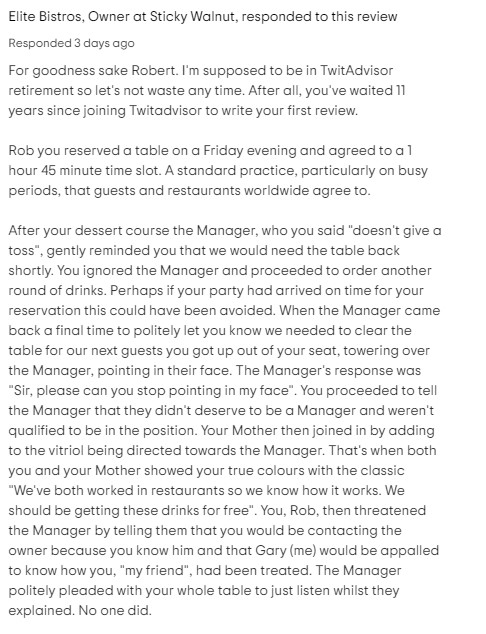 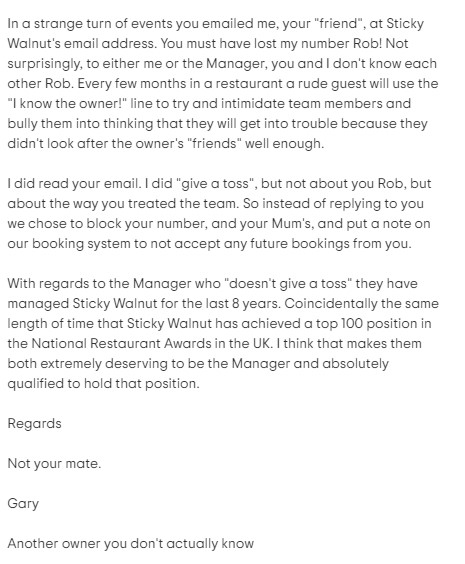 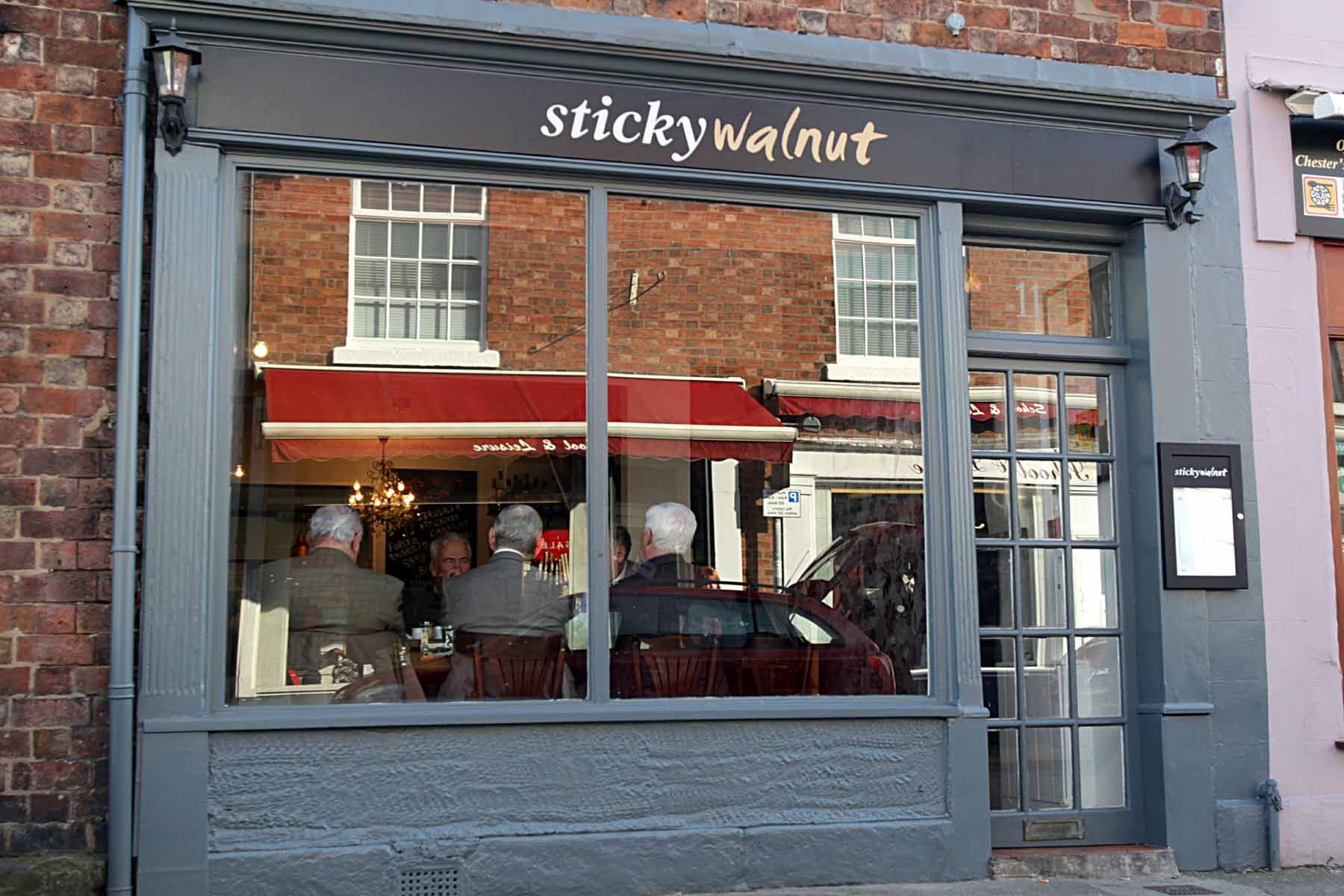