A RETIRED firefighter was arrested for hitting three Capitol cops with a fire extinguisher in last week's riots. 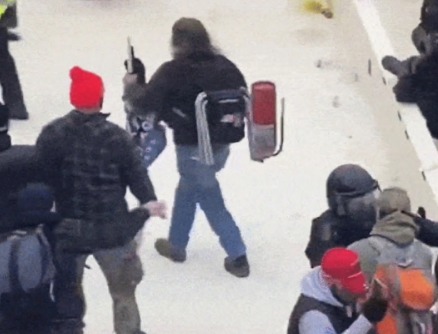 The retired firefighter, from Pennsylvania, was allegedly seen throwing an extinguisher at a police officer.

However, this was separate from the one that killed Officer Brian Sicknick, officials told the Wall Street Journal.

A photograph calling for a rioter's identification was released after footage emerged of the moment a protester hit an officer in the head with a fire extinguisher during Wednesday's protest.

It is unclear whether the man in the video is Robert Sanford.

The video shows droves of rioters storming past a barricade as US Capitol Police desperately try to keep them corralled on the west side of the building at about 2.30pm, the New York Post reports.

“They broke through, it’s on!” one man is heard yelling at the start of the clip.

Moments later, a rioter throws a fire extinguisher toward a group of officers below, striking one on the helmet.

It is unclear if the struck cop was Capitol Police Officer Brian Sicknick, 42 who, died on Thursday after reportedly being hit over the head during the riots.  An investigation into his death is ongoing.

Sicknick was reportedly bludgeoned with a fire extinguisher, according to The New York Times and The Associated Press, citing two law enforcement officials.

A statement by the Capitol Police said he was injured and collapsed after returning to his office.

Four other people died during the dramatic siege, including a California woman shot by Capitol Police and three others who suffered medical emergencies.

END_OF_DOCUMENT_TOKEN_TO_BE_REPLACED

END_OF_DOCUMENT_TOKEN_TO_BE_REPLACED
Recent Posts
We and our partners use cookies on this site to improve our service, perform analytics, personalize advertising, measure advertising performance, and remember website preferences.Ok