Rival Mexican cartels open fire on each other in broad daylight

Frightening moment rival Mexican cartels speed head-on toward each other in their cars before crashing, and then opening fire in broad daylight

A group of rival cartel sicarios were captured on video shooting at each other in broad daylight the middle of a street in Mexico.

The alarming incident took place Sunday in the central state of Guanajuato after alleged members of the Santa Rosa de Lima and Jalisco New Generation Cartel were involved in a nasty head-on collision.

A white sedan is seen on the surveillance footage transiting up Hidalgo Street in the municipality of Yuriria when it suddenly came to a stop as a woman driving a SUV crashed straight into it. 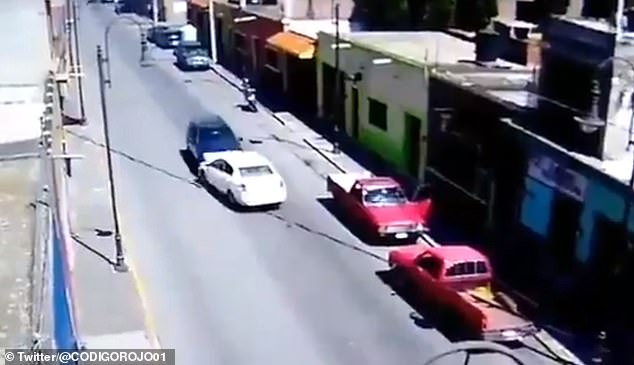 A surveillance camera in Yuriria, a town in the central Mexican state of Guanajuato, captured the moment two vehicles crashed  head-on before the incident turned into a shootout in broad daylight Sunday, leaving a female bystander wounded. No casualties and arrests were reported 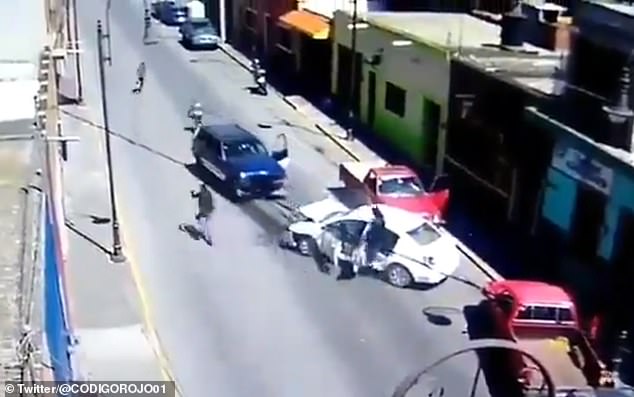 The woman and a male passenger fled the SUV before she suddenly tripped and fell on the ground as the vehicle somehow rolled back down the street while in reverse gear.

Three men stepped out of the wrecked car and opened fired at the two rival cartel members before all of the cartel henchmen escaped from the scene.

Local media outlet Noticias Verspertinas reported that a female bystander was injured during the shootout.

Authorities have not announced any arrests linked to the shooting, which took place a day before the state of Guanajuato registered 32 murders, most of them linked to the ongoing war between cartels in the area. 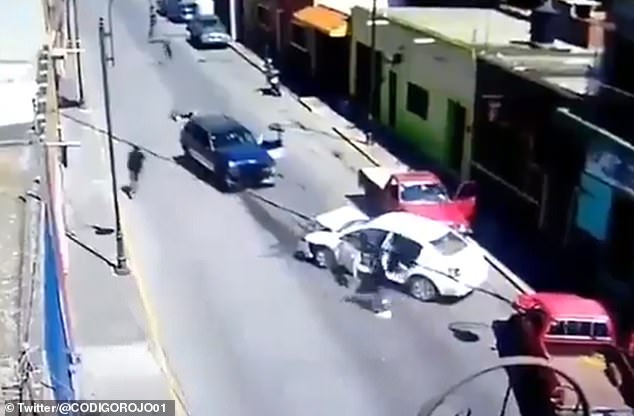 A cartel sicario (left) runs after two rival cartel henchmen, including a woman (pictured behind the SUV on the ground), during a confrontation that left an innocent bystander wounded Sunday in Guanajuato, Mexico

The murders were the most in the state after 33 homicides were reported July 1. At least 27 people were murdered September 27, making it the third deadliest day of the year.

At least five people were murdered and four others were wounded outside a home where a funeral service was held Monday, marking it the second deadliest day in 2020.

In a separate incident, authorities discovered two mutilated bodies. The Jalisco New Generation Cartel reportedly claimed responsibility and placed a banner in the background, warning its rivals against the act of extorting local businesses throughout the state.

Guanajuato has been engulfed by non-stop fighting between the Santa Rosa de Lima Cartel and the Jalisco New Generation Cartel, an organization which crime experts have coined as the most dynamic, since December 2017.

The criminal factions are involved in a tug of war over the lucrative drug trade and fuel theft businesses, and the battle has intensified since Santa Rosa de Lima Cartel leader, José Antonio ‘El Marro’ Yépez, was apprehended August 2.

Trump Team Asked SO MANY Celebs To Do Taxpayer-Funded COVID Ads – You'll Be SHOCKED Who Said 'Maybe'!

Remember a few weeks ago when we found out the Trump administration was taking millions meant to fight COVID-19 — and spending it on ads to tell people not to worry about it instead?? And that those ads would feature The Parent Trap star Dennis Quaid?? Well, it turns out

END_OF_DOCUMENT_TOKEN_TO_BE_REPLACED

By now you’ve probably heard the news about the Kardashian family’s disastrous trip to Tahiti. Actually, it sounds like the trip itself was pretty nice, but the negative press surrounding it? Not so pleasant. The Kards chartered a 777 and jetted off to the islands for Kim’s 40th birthday. Then they

END_OF_DOCUMENT_TOKEN_TO_BE_REPLACED

END_OF_DOCUMENT_TOKEN_TO_BE_REPLACED
Recent Posts
We and our partners use cookies on this site to improve our service, perform analytics, personalize advertising, measure advertising performance, and remember website preferences.Ok