Royal family: Lilibet joins a long line of succession to the Queen’s throne

London: In the wake of Prince Philip’s death, the Royal family are looking toward happier times with the news that the Duke and Duchess of Sussex have welcomed their second child.

Lilibet Diana Mountbatten-Windsor, the couple’s first daughter, is the third royal newborn to arrive in 2021, following the birth of Princess Eugenie’s son August in February, and Zara Tindall’s son Lucas in March. Princess Beatrice is also expecting a baby in the autumn. 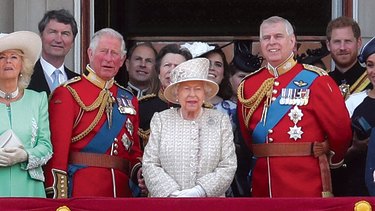 Following the birth of the Duke and Duchess of Cambridge’s third child Prince Louis in April 2018, most family members moved down a rung on the succession ladder as Louis slotted in as fifth in line, behind the Prince of Wales, Duke of Cambridge, Prince George and Princess Charlotte.

Historically, Princess Charlotte would have lost her spot to her younger brother, but new legislation introduced in 2013 overhauled the order of succession.

Prince Harry now sits in sixth place, with his first child Archie in seventh and his new daughter Lilibet in eighth. Prince Andrew, meanwhile, has been pushed down to ninth in line.

When Prince Louis was born it meant Prince Andrew did not have to ask his mother’s permission if he wanted to re-marry.

According to the new legislation, the first six people in the line of succession must obtain the Queen’s permission to marry. Previously, under a law dating back to 1772, all descendants of George II had to seek the monarch’s permission.

The line of succession

The Queen, who is 95 years old, is Britain’s longest reigning monarch and has ruled for 69 years.

As the child of a royal “spare”, the Queen was thought unlikely to reign until her uncle, King Edward VIII, abdicated in favour of her father in 1936, whereupon he became King George VI and she the heir to the throne.

Elizabeth became Queen upon his death on February 6 1952. But what happens when she dies and who will replace her? Here’s the line of succession, as it it will look when the new royal babies are born:

1. The Prince of Wales

Heir to the throne and the next king of the United Kingdom and the Commonwealth Realms. The Prince of Wales, 72, already holds the record for the longest-serving heir apparent in British history, having been in the position since 1952. He will also be the oldest person to be crowned in British history when he eventually succeeds the Queen.

2. The Duke of Cambridge

As the eldest son of the heir, Prince William will one day succeed his father the Prince of Wales. At the age of 38, he may have 30 or so years to wait, if his father enjoys the longevity of other members of the Royal family.

The Duke and Duchess of Cambridge’s first-born son, seven, will one day be King George VII, meaning that anyone alive today is unlikely to see another Queen on the throne in their lifetime once Elizabeth II’s reign is over. 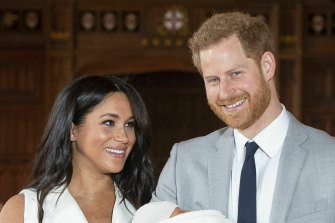 The Duke and Duchess of Sussex with their son, Archie. Prince Harry promised to be a hands-on dad.Credit:PA

Harry and Meghan’s second child, Lilibet Diana Mountbatten-Windsor, is the Queen’s tenth great-grandchild and the first to be born abroad.

Meghan’s pregnancy prevented her from travelling to the UK for Prince Philip’s funeral.

Once second in line to the throne, Prince Andrew, 61, is now so far down the list that he is no longer part of the “core” Royal family that will share the burden of official engagements in the future. His daughters, Princesses Beatrice and Eugenie, are no longer entitled to police bodyguards, which now have to be funded by Prince Andrew.

Princess Beatrice had struggled with the problem of how to combine a royal title with a need to find work. After quitting her £20,000-a-year job with Sony Entertainment Pictures in 2014, she treated herself to four holidays in the space of a little over a month.

However, the 32 year-old, who was the first member of the Royal Family to run a marathon in 2010, graduated in history and the history of ideas at Goldsmiths College, London, and has been Vice President of Partnerships and Strategy at business tech company Afiniti since 2016.

As well as continuing with charity work, she married Edoardo Mapelli Mozzi in July 2020 at The Royal Chapel of All Saints at Royal Lodge, Windsor. The couple are expecting their first baby in autumn.

The couple announced the news of their pregnancy in May, with a due date in autumn.

The baby will be Princess Beatrice’s first child, although Mr Mozzi has a young son, Christopher Woolf Mapelli Mozzi, from a previous marriage. The new baby will be 11th in line to the throne, moving the rest of the family, including Beatrice’s sister Princess Eugenie, one rung down.

On October 12 2018, the Duke of York’s younger daughter, who is 31, married drinks executive Jack Brooksbank at St George’s Chapel, Windsor Castle. The second royal wedding of the year featured figures from high society and the worlds of fashion and art.

Princess Eugenie gave birth to her first child, on February 10.

The Princess, 31, gave birth at the private Portland Hospital in Central London, with her husband Jack Brooksbank at her side.

Her son, August, is the Queen’s ninth great-grandchild and the Duke and Duchess of York’s first grandchild.

Having failed to complete his Royal Marines commando training, Prince Edward, 57, became a case study in the pitfalls of trying to earn a living when your mother is the Queen.

He organised the cringe-making Grand Knockout Tournament (better known as It’s a Royal Knockout) in 1987, then carried on with his TV production career, but incurred the fury of his brother the Prince of Wales when a camera crew employed by him unwittingly broke the terms of an agreement to leave Prince William alone during his time at university. He is now a full-time working royal.

Because the 2011 law change on the succession did not apply retrospectively, the Princess Royal, 70, remains behind her three brothers in the line of succession despite being the Queen’s second-born child.

Often described as the hardest-working member of the Royal family, she carries out hundreds of official engagements each year without receiving much coverage in the national media.

News of the two latest pregnancies – Meghan Markle and Princess Beatrice are both due later this year – means Anne’s son Peter Phillips, 43, will be 18th in line, with his children Savannah and Isla in 19th and 20th. The princess’s daughter Zara Tindall, 40, will be 21st in line; her seven year-old daughter Mia is 22nd and her second daughter Lena – who is now two years old – will be 23rd.