The Russian version of the Elton John biopic Rocketman has reportedly had all gay scenes cut from the movie.

Any representation of men kissing or performing sex scenes in the film have been removed, according to a Russian journalist who saw a preview.

The edits have seen around five minutes of the running time hacked out of the original version, film critic Anton Dolin said.

Some of the films references to drug-taking have also been removed, according to reports.

Dolin said key parts of the movie were censored and even the ending caption was altered to meet the country’s strict rules. 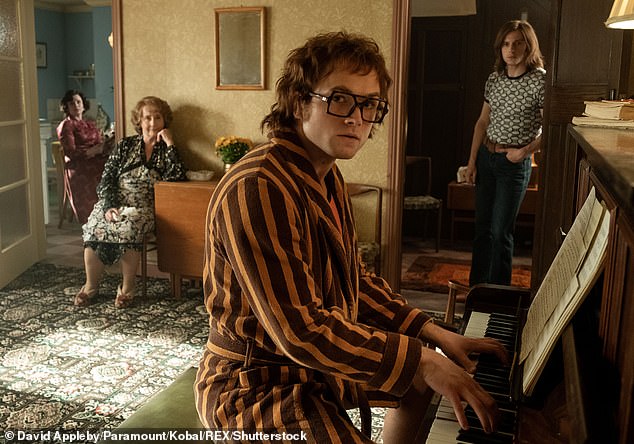 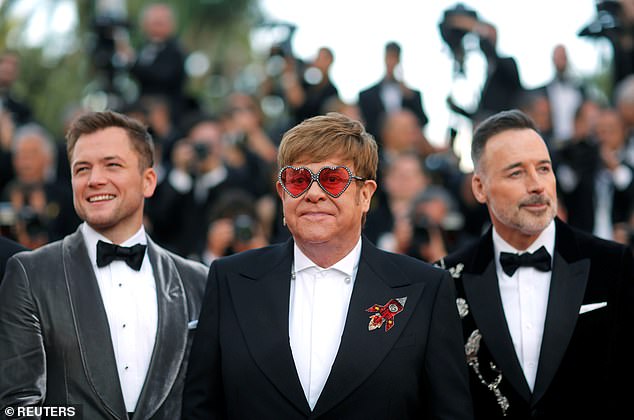 Elton John with David Furnish and Taron Egerton (far left), who plays the musician in the Rocketman biopic. References to Elton and David’s marriage and their children were reportedly censored from the Russian version of the film

In the Russian version a caption and photograph at the end referring to Elton living with his husband David Furnish and raising their two sons, Zachary and Elijah, had been cut out.

Instead the edited film simply says he founded an AIDS foundation and continues to work with his musical partner, Bernie Taupin.

Dolin described the cut as ‘nasty’ and added ‘Sorry, Sir Elton’, in a social media post about the deleted scenes.

He posted on Facebook: ‘All scenes with kissing, sex and oral sex between men have been cut out.

‘The most nasty thing is that the final caption has been removed from the finale.

‘The movie took only five minutes out, but it’s very noticeable. It’s about a principled five minutes, very important for artistic purposes.’ 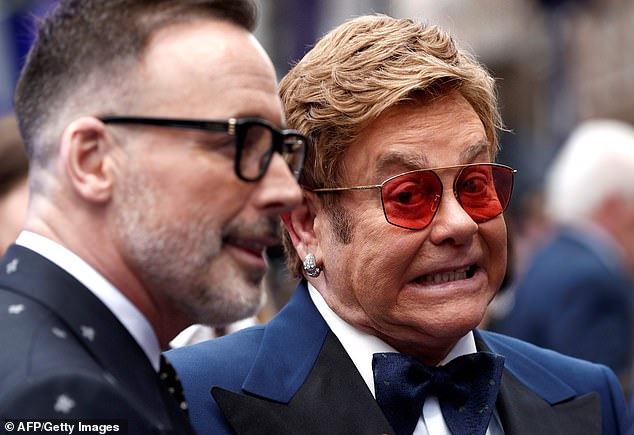 Elton John (right) and his husband, Canadian producer David Furnish, on the red carpet upon arriving for the UK premiere of the film Rocketman in London earlier this month 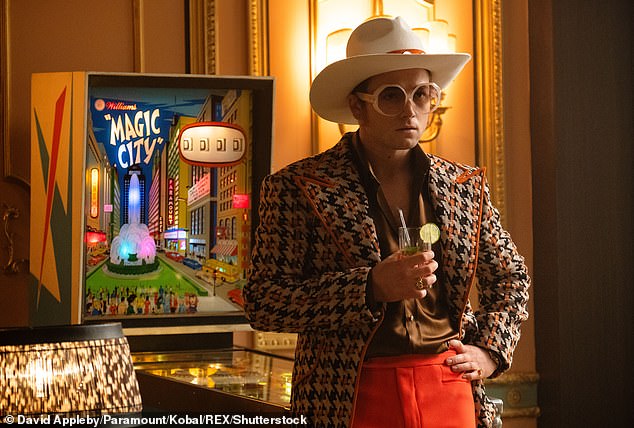 Drug-taking scenes were also removed from the Elton John film. Pictured Taron Egerton as Elton John in the biopic

The Russian Culture Ministry did not order the scenes to be cut and instead the movie was edited by the distributor Central Partnership to comply with Russian laws, according to the Moscow Times.

A spokesman from the Central Partnership told the paper: ‘Changes were made to the film to comply with the legislation of the Russian Federation.’

Film critic Yegor Moskvitin, who had seen the original Rocketman at the Cannes Film Festival, told the Moscow Times: ‘Several scenes had indeed disappeared from the Russian version.’

Elton John has himself said the studio wanted to tone down the sex and drugs in the movie but he wanted the biopic to be an accurate representation of his early life.

In an article for the Guardian, he wrote: ‘Some studios wanted to tone down the sex and drugs so the film would get a PG-13 rating. But I just haven’t led a PG-13 rated life.’

In the past Elton John offered to meet with Vladimir Putin to discuss LGBT rights after pranksters called him pretending to be the Russian president, but the meeting has yet to take place.