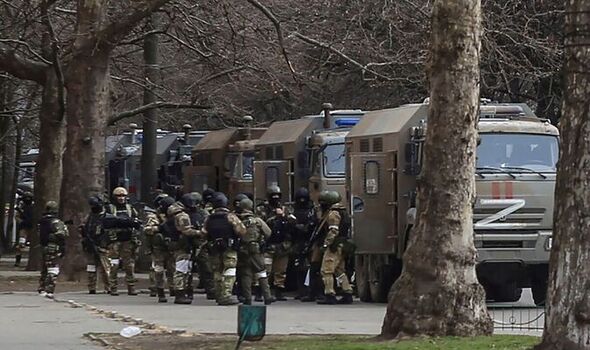 The news came as troops abandoned the administrative centre of the key southern city. An unverified photo showed the Russian flag missing from the southern regional capital’s town hall. Last month Moscow evacuated 25,000 civilians over the border into Russia.

One official said: “In Kherson, it is likely that most echelons of command have now withdrawn across the river leaving demoralised and leaderless men to face Ukrainian assaults. Some reservists are arriving in theatre without weapons.”

Western sanctions have crippled the Kremlin’s ability to replenish ammunition and weaponry. The official said: “Without the guns and rocket launchers being fired everything is grinding to a halt.”

Ukrainian troops have made major gains in the region and a bloody battle was expected to begin soon in an attempt to drive Russian forces out of a city they took over early in the war.

But Kyrylo Budanov, the Ukrainian intelligence chief, dismissed talk of a complete Russian withdrawal as an “information operation”, saying Moscow was “trying to create the illusion that everything is lost”. Defeat in Kherson would be a major setback for Vladimir Putin, who is likely to come under increasing pressure from nationalist hardliners.

One Western official said: “When it [the retreat] does go ahead we can expect another uptick in pointed criticism of Russian national leadership.

“A key task for us will be to continue to track how this impacts on Putin’s credibility. For now, he appears to successfully deflect with pointed barbs at his lieutenants.”

Efforts to cut the plant off from the grid risks a catastrophic failure of its cooling systems.

Zaporizhzhia is the largest nuclear facility in Europe.