One of the funniest lines in Ricky Gervais’s SuperNature show comes about three quarters of the way in when, in the middle of a particularly politically incorrect monologue (about Aids, as I recall), he pauses, does that wolfish grin of his and says: ‘Don’t worry, Netflix have already bought this.’

Ha. I imagine there may well be a few squeaky bums over at the streaming giant when it surveys the avalanche of predictable outrage that his show has provoked.

Who knows, it might even be in receipt of a stiff memo from the Duke and Duchess of Virtue Signalling, who won’t be happy to find themselves associated with such a full-throated, incisive and gloriously uninhibited take-down of woke culture. 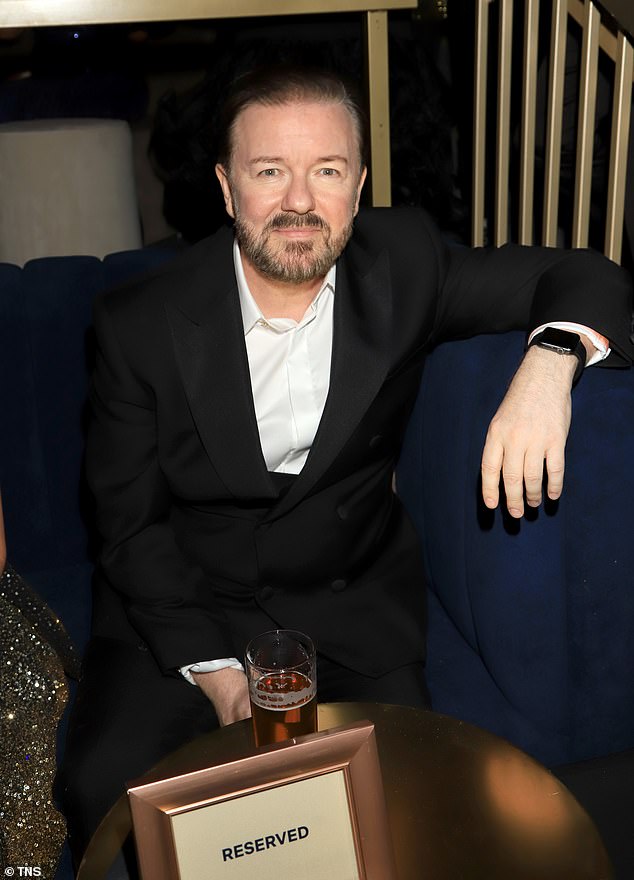 His jokes in ‘SuperNature’ were described as ‘dangerous’ material by an American LGBT rights group, while Stonewall accused him of ‘making fun of trans people’

Meghan will certainly have some explaining to do at her Montecito mother-and-baby yoga class about that Netflix documentary she and Harry are making.

In case you haven’t seen it, a quick recap. SuperNature is the latest stand-up show from Gervais, just over an hour of often wicked, invariably irreverent and occasionally savage observations on modern life — no holds barred.

Every conceivable boundary you could ever imagine, as well as many you probably can’t, is pushed to the absolute limit, Gervais observing with unalloyed amusement the shock and delight of the audience.

After decades on the small screen, most recently in the brilliant After Life (Netflix’s most watched British comedy series), it’s easy to forget that Gervais can command a live audience like few others.

Mocking up a debate over gendered toilets, Gervais starts the joke: ‘They are ladies, look at their pronouns. What about this person isn’t a lady?

‘What if SHE rapes you?’

Gervais later tells his audience: ‘You can’t predict what will be offensive in the future. You don’t know who the dominant mob will be.

‘Now, no one saw that coming. You won’t find a ten-year-old tweet saying ‘Women don’t have penises.’ You know why? We didn’t think we f***ing had to!’

Discussing the minorities and the demographics of Britain, Gervais points out: ‘We’re 5 per cent black, 5 per cent Asian. 5 per cent LGBQT.

‘I’m a white, heterosexual multi-millionaire. There’s less than one percent of us.

In another joke towards the end of the show in which he addresses self identity, Gervais says he supports trans rights – a remark met by cheers by a few members of the audience.

‘Live your best life, use your preferred pronouns, be the gender that you feel that you are. But meet me halfway ladies, lose the c**k, that’s all I’m saying.’

And if they don’t like it, they can ‘F-off’. The swearing is epic, I should warn you, but that’s not what makes this show so controversial.

It is Gervais’s total and utter disregard for the feelings or sensibilities of anyone he sets his sights on (which, it must be said includes pretty much everyone, including himself) and especially his response to the idiocy, intractability and general absurdity of the runaway train that is modern woke culture.

In particular, his jokes about trans culture which, needless to say, has got some knickers in an awful twist.

Robbie de Santos, of Stonewall, has accused him of ‘using his global platform to make fun of trans people’. All of which, of course, is grist to Gervais’s mill.

For his part, he has defended himself by saying he’s not attacking ‘trans folk but trans-activist ideology’ and that his job is to push boundaries and to tackle subjects that are often taboo and complex. But, really, you can tell he’s loving every second of the mayhem he’s caused.

The thing is, of course, his critics are right. This show IS offensive — very offensive. But the idea that this is some sort of targeted attack on the trans community is wrong.

Everyone gets it in the neck, from people who believe in ghosts to religious fanatics and people with Aids. He is just spectacularly rude about everyone. But he’s also brilliantly clever.

For example, he starts off with some old trope about women being a bit touchy about the presence of babies at funerals (his take in itself is pretty risque).

You think, wow, that’s a bit strong, isn’t it? Then he drops the real punchline.

‘Old fashioned women,’ he says, all matter-of-fact. ‘You know, the ones with WOMBS.

It’s funny, of course, because it’s true. We women with wombs are the old-fashioned ones; so much cooler and trendier to be of the other variety. Except no one ever dares say that. And that’s where the real comedy lies, in the subversiveness.

If anyone thinks Gervais is an insensitive oaf, though, they could not be more wrong. You just have to watch After Life to understand that.

It’s a bitter-sweet comedy about a man coming to terms with his wife’s death and Gervais plays the central character with a subtlety that can move you to tears.

Poignant, funny, beautifully observed and shocking in equal measure, it shows an incredible understanding of and insight into grief and loss. So much so that bereavement counsellors now use it to help people cope with the loss of a loved one. 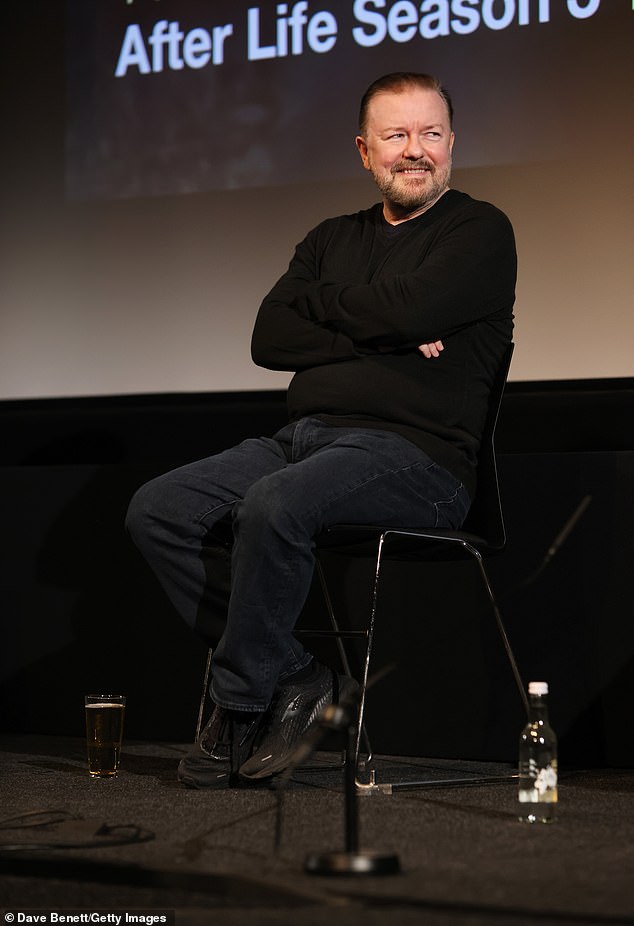 Comedian Ricky Gervais has hit back at critics after Twitter’s ‘woke brigade’ turned on the comic for mocking cancel culture with jokes about transgender people, Adolf Hitler and AIDS in his new ‘SuperNature’ Netflix special

And, however blunt and outrageous the gags in his new show, Gervais’s powers of observation and understanding are actually on full display again.

He’s seen how the subjects he’s tackling are ones that concern people everywhere. He’s observed our bewilderment and anger that in these censorious days, we’re not allowed even to discuss them. He understands how ridiculous our politicians look when, because of trans activist ideology, they tie themselves in knots trying to define what a woman is.

We live in a world where, like Alice in Wonderland, we are being asked to believe six impossible things before breakfast — and where if we even dare to question the obvious contradictions staring us in the face, it’s off with our heads.

Most people are too scared to point that out. But Gervais doesn’t care. Partly, of course, because he’s a ‘white multi-millionaire’, as he puts it. But partly because he never has.

He goes on. ‘What about this person isn’t a lady?’ he asks, imagining a conversation with someone outraged at the suggestion that a trans woman might not be considered a real woman.

To my mind, there’s no question. The man can be a grade-A you-know-what. He’s a curmudgeon but an equal-opportunities curmudgeon. And there’s a place for people like him in this humourless, tedious new world of ours. 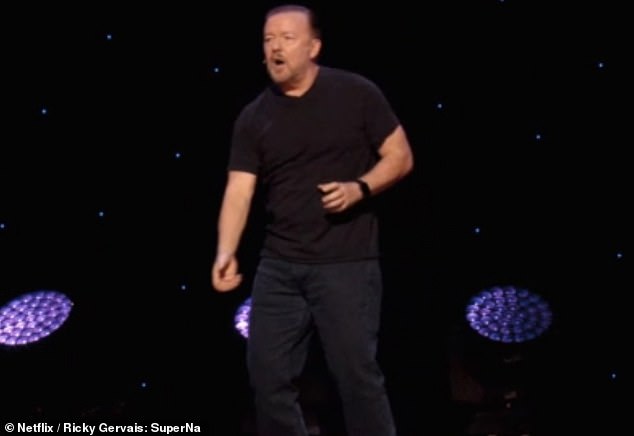 The comic, 60, starts the show by describing comedy to the audience as ‘basically a bloke talking’, before purposely failing to recall any ‘funny female comedians’

He has taken on one of the most complex, most divisive, most demoralising issues of the modern age — the imposition of the extreme views of a small minority on a bewildered majority and the characterisation of any woman who objects to having her rights eroded as a bigot and a TERF [trans exclusionary radical feminist] — and reduced it down to size with a flick of his razor-sharp wit.

Forget cancelling him; he deserves a knighthood.