Prosecutors will make a second attempt to put Guy Sebastian’s former manager Titus Day behind bars months ahead of his sentence for embezzling more than $600,000 of the singer’s earnings.

Day, 49, was found guilty by a NSW District Court jury last week of 34 counts of embezzlement, relating to performance fees and royalties dating back to 2013, including a $187,524 shortfall in what he was supposed to send Sebastian for supporting Taylor Swift. 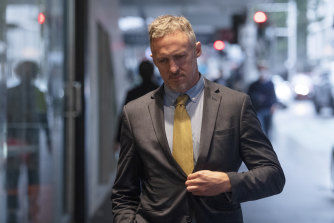 Titus Day leaves court on July 1, when he was allowed to remain on bail after being convicted of embezzlement.Credit:Sam Mooy

Day remains on bail after Judge Timothy Gartelmann last Friday refused a detention application made by the Crown. The judge was not positively satisfied of the “absolute” certainty of full-time imprisonment “on the limited evidence presently before the court”.

Day was required to surrender his passport and must live at his Sydney address, reporting to police each Wednesday. His sentence hearing was set down for September 16.

However, Day is listed for a bail hearing in the Supreme Court on Tuesday, July 12, when the Herald has confirmed the Office of the Director of Public Prosecutions will be making a second detention application, this time in the higher court before Justice Peter Garling.

Gartelmann had said even though it appeared “likely, even highly likely that … a sentence of imprisonment will be imposed in these proceedings”, it was insufficient to engage the Bail Act amendment relied upon by the Crown, which only passed parliament last month, to have Day detained ahead of sentencing.

“The determination I have made today does not mean the accused will not be sentenced to full-time imprisonment, nor does it mean it is unlikely,” he said on Friday last week.

On the first application, Crown prosecutor David Morters, SC, submitted that it was “more probable than not” Day would be jailed. He said he was unaware of any matters which approached Day’s level of systematic offending “where anything but a period of full-time imprisonment has been imposed”.

Embezzlement by a clerk or servant carries a maximum penalty of 10 years behind bars. Morters acknowledged there was scope for cumulation regarding the sentences imposed for some charges.

Defence barrister Dominic Toomey, SC, had argued that Gartelmann was being asked to decide the application ahead of Day’s sentence hearing or any evidence concerning his subjective case.

“Your Honour would have to be positively satisfied that Mr Day could not even be considered for an intensive correction order,” Toomey said, referring to a sentence served in the community under supervision.

Day managed Sebastian’s career from 2007 until the pair’s acrimonious split in 2017. Reacting to the verdicts, Sebastian said he was relieved the “painful chapter” of his life involving “betrayal and dishonesty” had ended, noting Day had been one of his closest mates.

The jury found Day not guilty of 13 embezzlement charges. The judge directed his acquittal on three other counts.