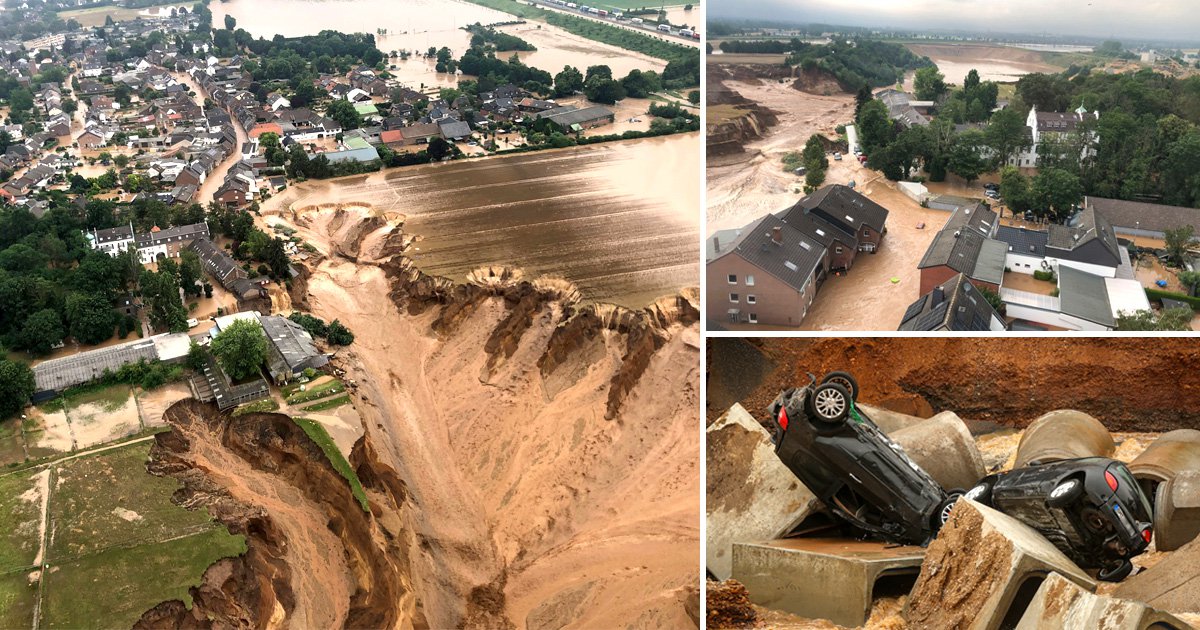 ‘Several’ people have died in a landslide which hit a flood-damaged town in nothern Germany on Friday.

Homes and part of a castle in the town of Blessem, near Cologne, were demolished when the banks of the River Erft burst, causing a nearby quarry to collapse.

A spokeswoman for the local government said there were ‘confirmed’ deaths, but did not say how many.

According to German newspaper Bild, 55 people have been rescued and emergency service teams are rushing to find more survivors.

‘Houses were largely swept away by the water and some collapsed,’ the Cologne local authority said on Twitter.

According to geographer Matthias Habel, the river poured into a gravel pit which can no longer withstand the water pressure.

The pit is said to be getting ‘bigger and bigger’ with the erosion spanning more than 300 meters and reaching the outskirts of the town.

A district spokesperson warned people not to return to their homes, saying there is ‘still danger to life’.

More than 100 people have died and several more are unaccounted for in Germany after some of the worst flooding in decades.

Entire towns and villages have been left devastated after unprecedented rainfall caused rivers to burst their banks.

Mobiles phone networks and internet connections have been been wiped out by the water, hampering search efforts for the missing.

At the time of writing, officials confirmed 103 people had died in total, including 43 residents in the North Rhine-Westphalia region and at least 60 in the Rhineland-Palatinate region.

‘The fear is that there will be more,’ said a spokesman for the Koblenz police on Friday.

Belgium has also been hit by unprecedented flooding, with at least 15 people confirmed dead.

Luxembourg and the Netherlands were also hammered by heavy rains, inundating many areas and forcing thousands to be evacuated in the city of Maastricht.

But Germany was the hardest hit, with unsuspecting residents caught completely off guard by the torrent dubbed the ‘flood of death’ by Bild.

Streets and houses were submerged by water in some areas, while cars were left overturned on soaked streets after flood waters passed. Some districts were completely cut off from the outside world while in Ahrweiler, several houses collapsed completely, drawing comparisons to the aftermath of a tsunami.

At least 24 people were confirmed dead in Euskirchen, one of the worst-hit towns just to the north.

Chancellor Angela Merkel said she fears the true extent of the devastation won’t be clear for many more days.

‘My empathy and my heart go out to all of those who in this catastrophe lost their loved ones, or who are still worrying about the fate of people still missing,’ Merkel told reporters in Washington.

Meanwhile Ursula von der Leyen, president of the European Commission, has called the floods ‘a clear indication of climate change’ and said they ‘show the urgency to act’.