Sheep farmers are now resorting to burning wool after a huge price crash during the coronavirus pandemic has rendered it basically worthless.

Dairy farms experienced a similar crisis at the peak of the outbreak in April, when they were forced to pour a million litres of milk down the drain as demand from factories nose-dived.

The price paid for wool has plummeted by nearly half from 60p a kilo to 32p this year, with farmers claiming the situation is now so bad that they actually lose money when they sell it.

Previously, farmers would shear their livestock and take the remains to British Wool, previously known as the British Wool Marketing Board to sell.

But due to the virus, the price offered is now often worth less than the fuel the farmers would use to drive it to the depot.

They are dealing with the pile up by either burning the wool or using it for compost. 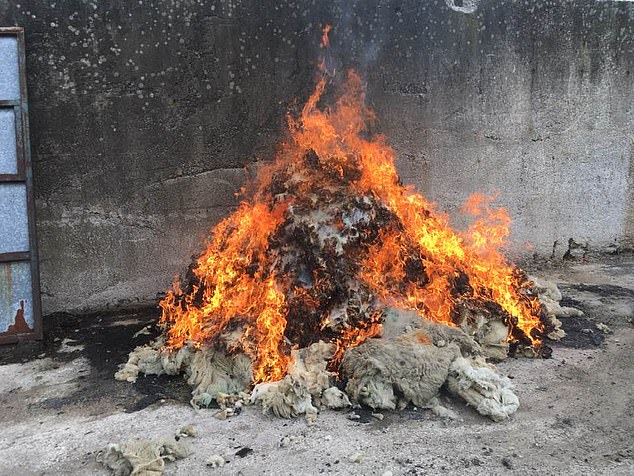 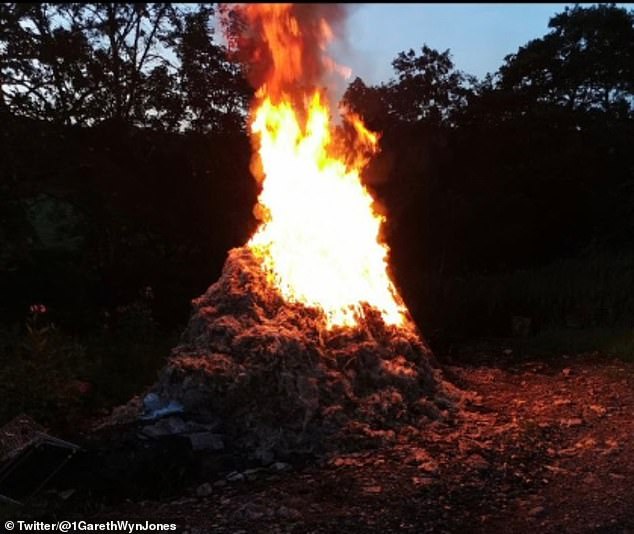 A huge pile up has been created over the last few months, which has led to farmers either burning the wool, pictured, or using it for compost

British farmers were forced to pour a million litres of milk down the drain in April as demand from factories nose-dived due to the coronavirus outbreak.

The milk was destined for cakes, cheeses, creme fraiche and other products that have seen demand go into reverse gear during the crisis.

UK farmers made a £7million loss from sales in April as more than half cut the price of their milk, the study by industry bodies Dairy UK and AHDB said.

This means farmers have lost 18 pence on every litre they produce.

Lawrence Wright, 75, who farms sheep at Middle Campscott Farm near Ilfracombe, Devon, said: ‘Wool prices are on the floor this year and I’ve seen reports of people burning wool.

‘It’s environmentally unfriendly to burn it. If you are going to do anything with it I’ve also heard of people composting, which would be better.

‘The British Wool Marketing Board didn’t sell the whole of last year’s yet so that has inevitably driven prices down.’

Wool from each year’s harvest, or ‘clip’, is sold a year later by British Wool and this year the market was shut in February.

As a result, the board are struggling to clear a nine million kilo backlog, out of an initial 27 million kilos.

Mark Weekes, 55, a sheep farmer from Exeter, Devon, said despite the financial difficulties, they still had to shear all the sheep for welfare reasons.

‘They suffer badly from blowfly strike which causes maggots and that is a horrendous thing for them to have. So we have to shear and that’s a direct cost we can’t recoup.

‘We deliver our wool to the board, but it costs more to take it there than we make out of it.

‘I can’t bring myself to throw it away. It’s low because people aren’t using wool, they’re more than happy to use plastics and pollute the environment. 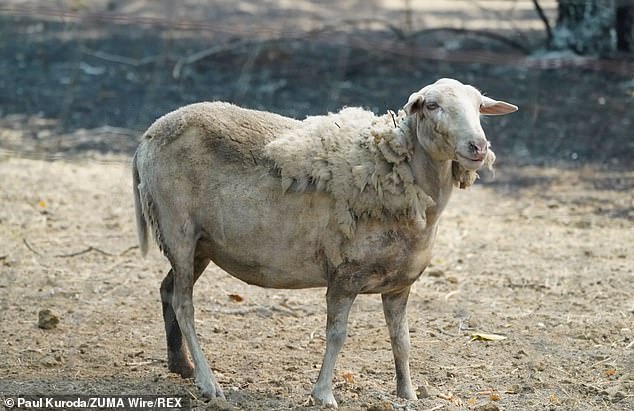 Wool from each year’s harvest, or ‘clip’, is sold a year later by British Wool and this year the market was shut in February

‘It’s a shame, but that’s how things are. If there was more demand the price would be higher.’

British Wool said it hoped to emerge out of the slump in a stronger position, but needed the farmers support to be able to do that.

A spokesman said: ‘Given the situation we find ourselves in, we have had to place a value on this unsold stock which is at a significant discount to the last prices sold.

‘We are asking producers to support us through this very difficult season by bringing their wool into us so that we can preserve the volume use of Ulster wool downstream, further develop our new Ulster wool-rich product ranges and emerge from the Covid-19 slump ready to exploit a strengthening market.

‘Without the consolidation of wool into commercial volumes through Ulster Wool and our continuing to market it more and more effectively, the prospect will be for lower prices indefinitely.

‘We will emerge stronger from this period, so long as wool producers stay together and continue to back their organisation.’

The National Farmers Union said: ‘The issue is that the market for wool is quite depressed at the moment for various reasons – mainly to do with the recession provoked by coronavirus and the closure of export markets.

‘So farmers are being paid less for it. That means for some it is not worth taking the fleeces to the collection centre as they normally would do, they just dispose of them on farm.

‘Wool is collected, graded and auctioned by British Wool and they are trying to find alternative markets for it to increase demand.

‘It can be used in things like insulation and acoustic baffles as well as the carpets and clothing traditionally made from it. 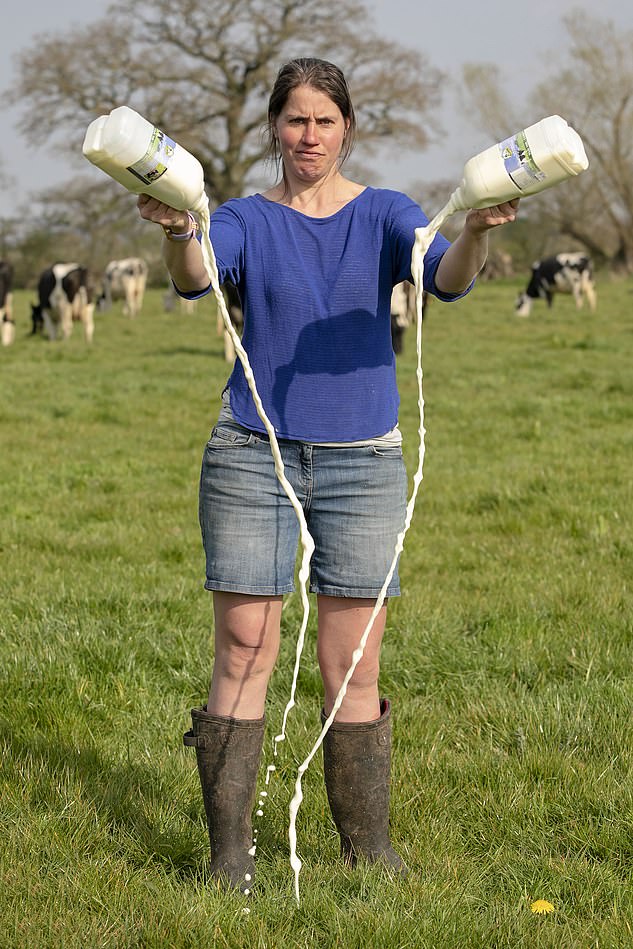 Dairy farmer, Josette Feddes of JoJosDairy, had to throw away 12,000 litres of milk in April

‘The NFU very much supports this campaign, but it is not something that is going to get the price up overnight.

‘Sheep have to be sheared for welfare reasons regardless of the price paid for the wool, but as it is generally of very high quality it is a shame to see it go to waste.

‘It would be far better if it could be utilised. But for farmers this has to make economic sense.’

The National Sheep Association said it was disappointed to see the effect coronavirus has had on wool prices.

Chief executive Phil Stocker said: ‘It’s not fully clear how the reduced value of the remainder of the 2019/2020 clip will affect the overall value of a farmers wool delivered last year, but it would be easy to assume total fleece values might be down by 50 per cent.

‘Although there are plenty of sheep farmers who do get real value from their wool most will at least expect it to cover shearing and wool handling costs.

‘A fall of 50 per cent of total value would, for most, mean total income not clearing costs.

‘The NSA is very disappointed although we understand fully the reasons behind this situation.

‘A lot of work has gone into increasing demand and values for wool and this will set things back.

‘We are disappointed that British Wool, being treated as a Government Arm’s Length Body, has reportedly been unable to access the Government’s Covid-19 support schemes and this will have had a big bearing on British Wool’s decisions.’

END_OF_DOCUMENT_TOKEN_TO_BE_REPLACED

END_OF_DOCUMENT_TOKEN_TO_BE_REPLACED
Recent Posts
We and our partners use cookies on this site to improve our service, perform analytics, personalize advertising, measure advertising performance, and remember website preferences.Ok