Singapore: Quarantine-free travel between Europe and south-east Asia is set to resume next month with Singapore on Thursday announcing a corridor with Germany for fully vaccinated passengers.

The regional business and aviation hub had flagged a desire to begin re-opening its borders as it approached a COVID-19 immunisation rate of 80 per cent.

Now that 77 per cent of Singapore’s population of 5.5 million has had two shots of a vaccine, the city state is pushing ahead with those plans. 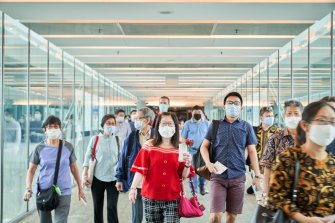 Open connections with its neighbours in south-east Asia are all but out of the question at the moment as the Delta variant continues to spread rapidly and most countries struggle to get hold of vaccines fast enough. A travel bubble with Hong Kong has also twice been aborted in the past 10 months.

Instead, Singapore is looking to Europe for its first major experiment with post-pandemic international travel.

Prime Minister Lee Hsien Loong’s government has selected Germany for what is effectively a trial run ahead of a broader opening up.

From September 8, there will be seven designated flights a week out of Frankfurt and Munich on which fully vaccinated passengers can travel without having to serve time quarantining when they arrive in Singapore.

They will have to isolate at their home or at a hotel until they have received a negative result from a PCR test and undergo additional pre-departure and post-arrival testing. They must also have spent the previous 21 days in Germany and must have been fully vaccinated in either Singapore or Germany.

But as Germany is already open to people arriving from Singapore, no matter if they are vaccinated or not, the island nation’s decision will effectively establish a long-awaited transcontinental travel bubble.

“The current situation is not sustainable. As a small and open economy, Singapore’s survival and success depends critically on being open and connected to the world,” Singapore Transport Minister S Iswaran said.

“We are re-opening in a careful and calibrated way … step by step.“

The link is being established despite Germany reporting 8324 new infections of the virus and 22 deaths on Wednesday.

They are the European nation’s highest case figures in nearly three months but while the numbers have been rising, the vaccine rate there has reportedly had an impact in terms of limiting hospitalisations.

Nearly 64 per cent of people in Germany have had at least one dose and 58 per cent are fully vaccinated.

Singapore also announced on Thursday that it would be starting a vaccinated flight lane with nearby Brunei on September 8.

Iswaran said Germany and Brunei had been chosen for the pilot program based on “overall risk and operational assessments” . It will be gradually extended to other countries if it proves successful but to begin will not involve children under 12, who are not part of Singapore’s national vaccination scheme.

Singapore reported 29 new infections on Thursday including 13 that were unlinked but with admissions to intensive care units decreasing, it last week began resuming freedoms for vaccinated people such as eating out and working out at gyms.

Its re-opening could still be paused or wound back, however, if cases soar and hospitalisations accelerate, particularly with young children unvaccinated and vulnerable to infection in a major outbreak.

“We should be under no illusion that the road ahead will be an easy one,” said Singapore Finance Minister Lawrence Wong.

“The path towards being a COVID-resilient nation is going to be a long and hard slog. Even with high vaccination rates, we are not going to reach herd immunity. We must be mentally prepared that cases will rise.“