Low pressure from a westerly direction is predicted to blast wintry conditions in northern regions of the UK from tomorrow. Snow risk maps from Netweather also show Scotland seeing 30 – 90 percent chance of snow potentially falling from tomorrow. The models show red and green swirls of cold air arriving from a northwesterly direction.

Temperatures could also plunge as low as -2C in Scotland on Wednesday, March 10, according to WXCHARTS.

Further down in England, lows of 3C could strike the Lake District in the northwest, while London and Kent in the south see 7C.

It comes as the Met Office has also issued yellow warnings for wind this week as brutal low pressure is set to pummel the whole of England and northern Scotland.

Paul Michaelwaite, a forecaster at Netweather, warned of snow arriving later in the week due to the low pressure system barrelling over from the Atlantic. 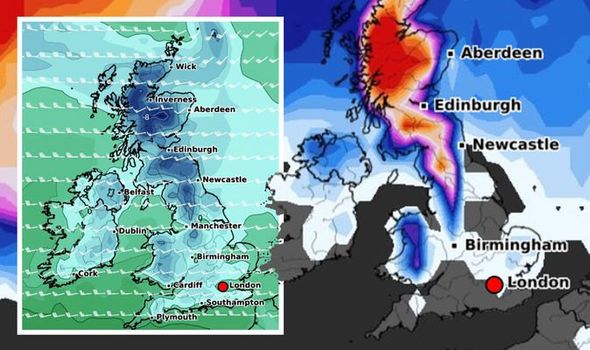 He said: “High pressure is retreating from our shores today, with two deep areas of low pressure on the way over the next couple of days. The unsettled weather will then continue into the weekend.

“Wednesday will also see the initial band of rain continuing to move through to the southeast, but at the same time, with the next low pressure system nearing from the Atlantic, another band will be pushing up from the southwest through the day.

“By this point, the original low pressure, which arrived today (Tuesday), will be up close to Iceland, but the next one will zip in and be not too far from the northwest of Scotland by the evening.

“As well as its rain bands, it will also re-introduce strong winds, with England, Wales and the southern half of Scotland likely to see the strongest gusts of 55-70mph or so from the evening onwards. 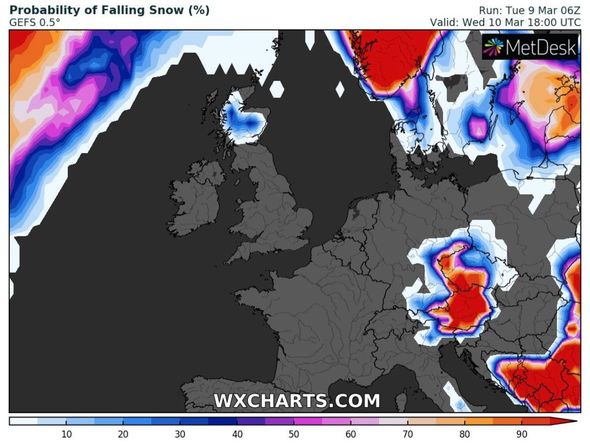 “Up to Wednesday, the weather this week will have been on the mild side, but as that low pressure moves east into the North Sea, that’s going to change as much fresher, colder westerly winds arrive.

“The last of the persistent rain should clear the east early on Thursday, and the strongest winds will start to ease into the afternoon as well. It’ll be a day of sunshine and frequent blustery showers, blown in on that strong westerly wind.

“The showers will be wintry over the hills of northern Britain in particular and will be most frequent in the north and west. Eastern England may still see temperatures scraping into double-figures, but elsewhere 4-7C will be about the top limit, with the wind making it feel colder than that.

“Friday is then set to follow along a very similar theme. Another small area of low pressure is likely to cross from the west later Friday and into Saturday. 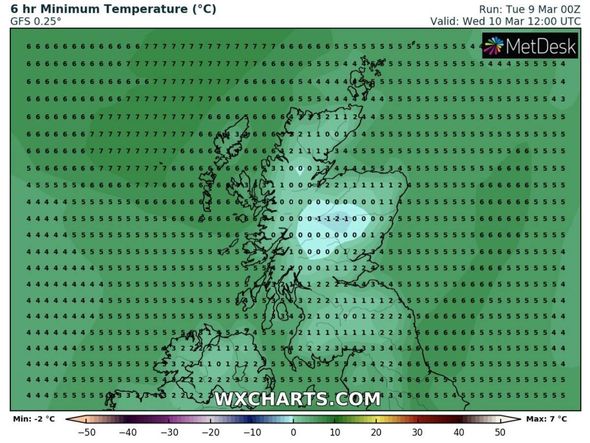 “This may well pep up the winds for a time and bring some more persistent wet weather in places. Then, with the air turning a touch colder still, Saturday will be another day of sunshine and blustery showers, with more areas potentially seeing a wintry flavour to them as well.”

Brian Gaze at the Weather Outlook added snow could strike in Scotland as early as tomorrow.

Hs forecast for this week said: “Tomorrow is looking wet in most of the UK and the rain turns heavy at times.

“Over the Scottish mountains, sleet or snow is possible. It will be windy with a risk of gales, particularly in the west. 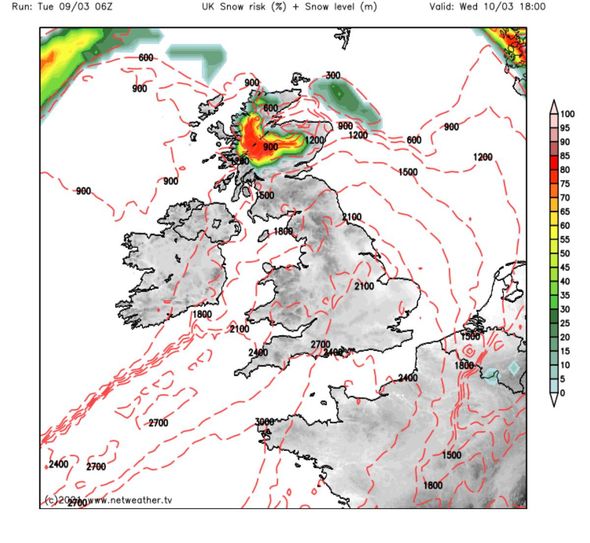 “Thursday brings heavy showers and at times they could merge to give longer spells of rain. Over high ground in the north and west sleet or snow is likely.

“Gales are expected in much of the country and in the west severe gales are possible. Temperatures close to the average in the south but a little below in the north.

“The unsettled theme continues for the rest of the week as bands of rain push across all regions.

“Further sleet or snow is likely over high ground in the northern half of the UK and possibly at low levels in Scotland. Temperatures generally fluctuate around the average. It could become very windy again at times.” 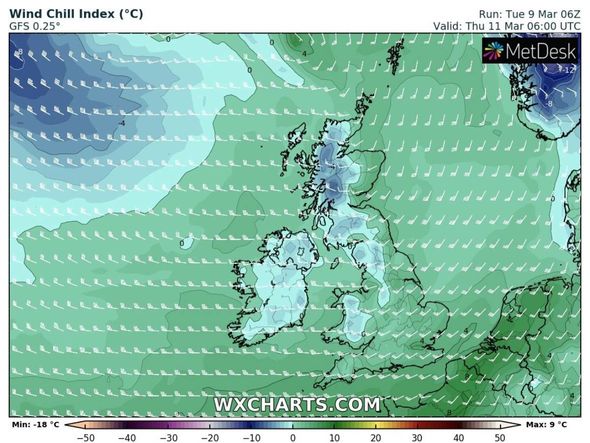 BBC Weather’s forecast for this week also predicted stormy weather due to the weather system pummelling the UK from the west.

The forecast between Sunday, March 6 and Sunday, March 14, said: “We will see the weather pattern change as high pressure declines over Northwest Europe.

“This will shift away to the west in the Atlantic allowing low pressure systems to move in by Tuesday.

“This will create stormy weather by the middle of the week.

“We may see a pair of low pressure systems between Tuesday and Thursday that will bring some heavy rain and potentially strong winds for some.” 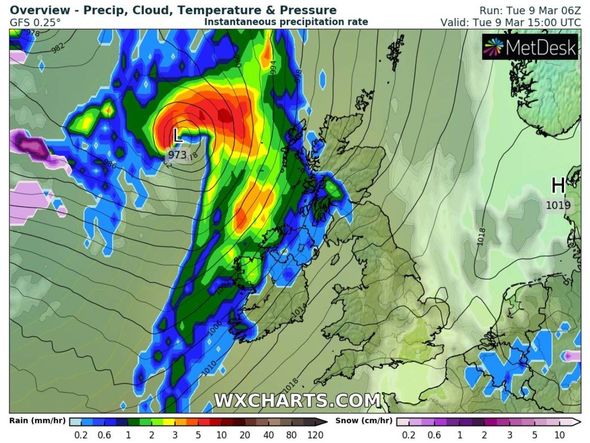 The Met Office also issued yellow warnings for wind across the whole of England between Wednesday and Thursday this week.

There is also another yellow warning for wind in Portree and Stornoway, in northwestern Scotland today.

The Met Office said: “Strong and gusty winds are likely to develop on Wednesday evening and continue into Thursday across England and Wales.

“Gusts of 50-55 mph are possible inland, especially close to showers.

“Gusts may reach 60-70 mph on coasts and hills, especially in the west, before gradually easing on Thursday afternoon.”