So why DID Boris miss Rishi's Budget-replacing Winter Plan?

So why DID Boris miss Rishi’s Budget-replacing Winter Plan? Downing Street denies there is a rift between No10 and No11 as Prime Minister skips economic update and instead poses for pictures in police cars

Downing Street was forced to deny a rift between Boris Johnson and Rishi Sunak today after the Prime Minister was notably absent from the Chancellor’s key economic update.

While his economic chief was explaining the successor to the furlough scheme, Mr Johnson was more than 70 miles away in Northampton at a police training centre, posing for pictures in squad cars.

Downing Street denied speculation about a rift between at the top of Government, insisting there was ‘absolutely not’ a problem between Mr Johnson and Mr Sunak.

But it will add fuel to suggestions that all is not well between No 10 and No11. Mr Sunak’s assured public displays have led him to be seen as a major candidate to replace the Prime Minister, who has seen his personal popularity nosedive during the coronavirus crisis.

The hawkish Chancellor, who has warned about the dramatic consequences of closing Britain down too far,  is also seen as having got his own way over many new measures, including ending furlough and introducing a light-tough new lockdown featuring a minor pub curfew.

Asked why he was not sat behind the Chancellor during Thursday’s economic statement, the Prime Minister said: ‘Of course, I fully support the package of measures that we’ve jointly drawn up. 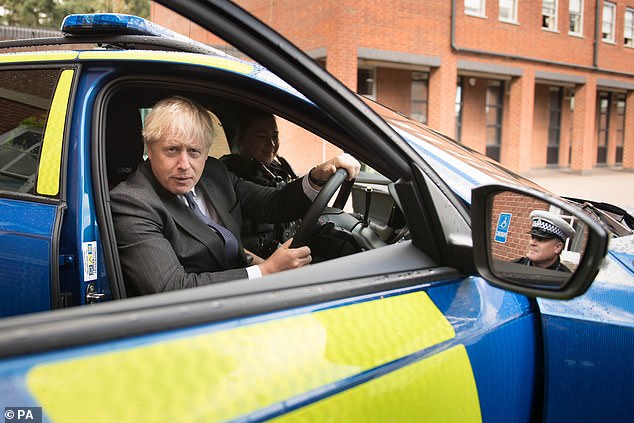 While his economic chief was explaining the successor to the furlough scheme, Mr Johnson was at a police training centre, posing for pictures 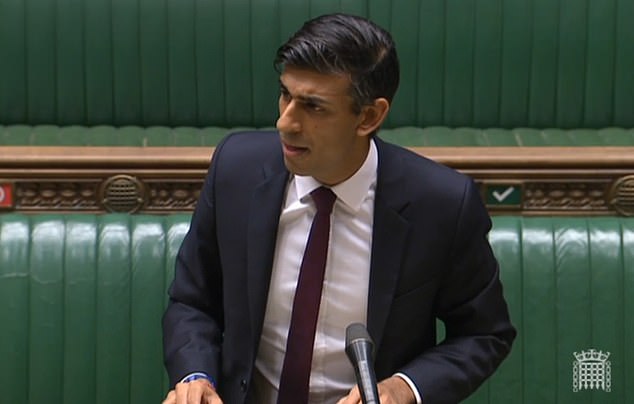 Downing Street denied speculation about a rift between at the top of Government, insisting there was ‘absolutely not’ a problem between Mr Johnson and Mr Sunak

‘What I’m doing today is setting out the vital corollary of those measures.

‘They won’t help unless everybody works together, we all work together, to drive the virus down and the way we can do that is to follow the guidance, the rule of six, stay spaced, make sure you self-isolate if you’re contacted by NHS Test and Trace – £500 if you do, £10,000 fine if you don’t.

‘A £200 fine for not wearing a mask in the right place, a £10,000 fine potentially if you organise a gathering of more than 30 – these are very considerable fines and it is important that everybody works together to, as I say, drive the virus down now – stitch in time saves nine – and protect the economy.’

The Prime Minister was at Northamptonshire Police HQ to meet new police recruits. He sat in one of the force’s new interceptor cars before heading to a sports hall where he watched some of the recruits practice first aid.

‘I should have my mask on shouldn’t I,’ the PM told one of the recruits as she delivered CPR to a dummy.

Mr Johnson’s visit came a few days after his speech in which he announced tougher punishments for those who flout the Covid-19 restrictions.

Asked what he would say to those who were about to lose their jobs due to coronavirus cutbacks, the PM said: ‘The Chancellor is being totally realistic with people about the prospects of the economy.

‘Things will be tough. What we’re saying to people who do the right thing – who self-isolate when they are contacted by NHS Test and Trace, they will get support – there’s £500 to support them.

‘But there’s also a £10,000 fine potentially if you don’t comply and it’s absolutely vital that we all work together now to get the R down, get the virus back under control and simultaneously allow education and the economy to continue.

‘That is the best thing for jobs and growth in this country.’

In June Tory MPs expressed concern about ‘growing cracks’ between Mr Johnson and the Chancellor amid Cabinet splits over post-Brexit economic policy and the UK’s tense relationship with China.

Differences between the two most powerful members of the Government came to a head last week in meetings about the security threat posed by Beijing and the scope of a new trade deal with Washington.

Sources also claimed that a rift has opened up over coronavirus strategy – although allies of both men insisted they are ‘on the same page’ in terms of managing a swift exit from the lockdown and avoiding austerity measures during the recovery.

END_OF_DOCUMENT_TOKEN_TO_BE_REPLACED

END_OF_DOCUMENT_TOKEN_TO_BE_REPLACED
Recent Posts
We and our partners use cookies on this site to improve our service, perform analytics, personalize advertising, measure advertising performance, and remember website preferences.Ok