TENSE video taken on Thursday shows a white man in a military uniform repeatedly punching a black man in the face in New York.

The footage shows the man, dressed in military fatigues, attacking the man, who Said Hamideh, the man who filmed the scene, believes was mentally ill. 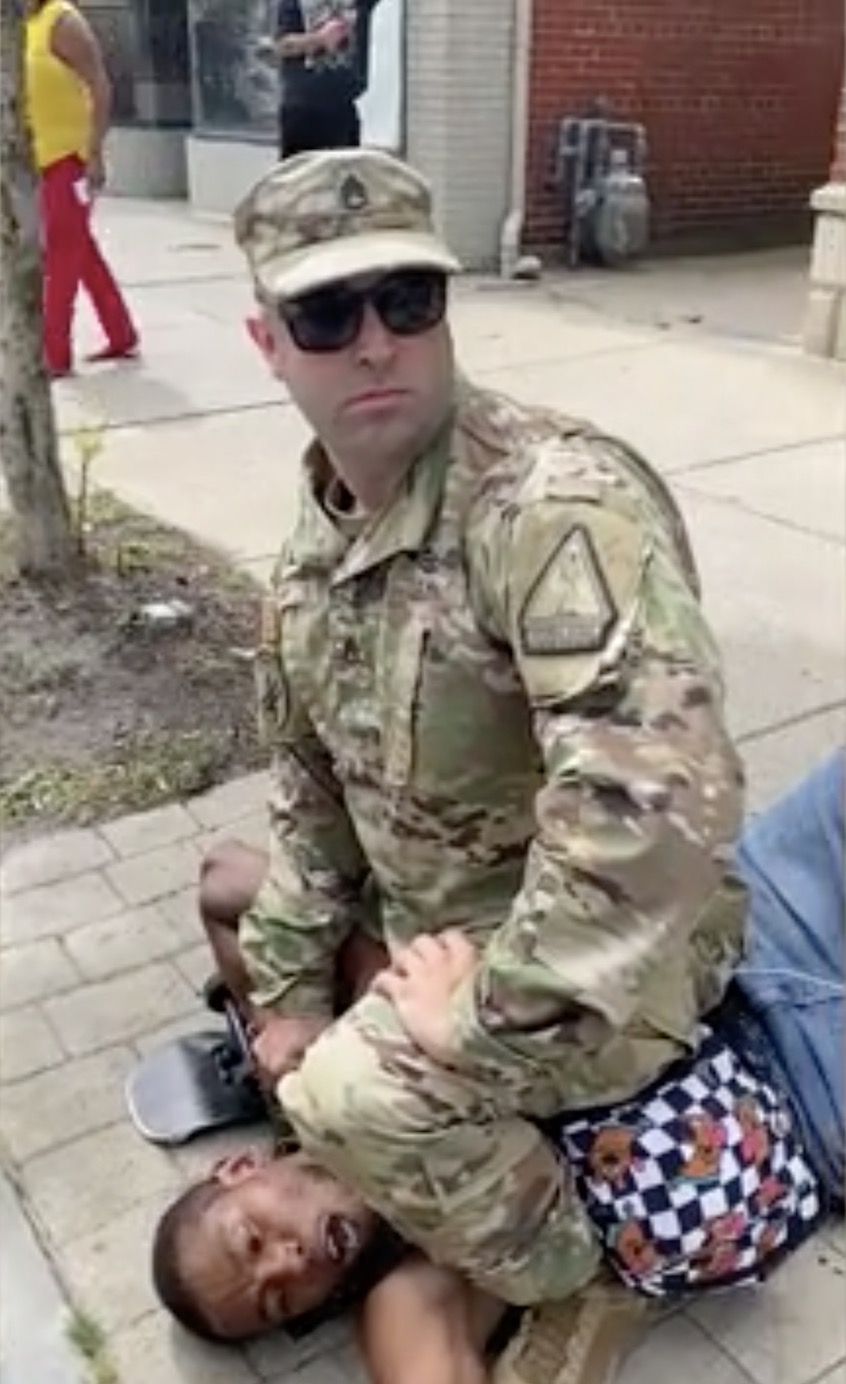 According to DailyMail.com, the incident unfolded on Thursday afternoon in upstate Buffalo.

The military man is seen approaching the black man on a sidewalk before punching him in the side of his face.

The solider then sits down on the black man’s chest after forcing him to the ground.

A group quickly forms as people shout at the soldier, telling him to stop, while the soldier shouts for someone in the crowd to call the cops. 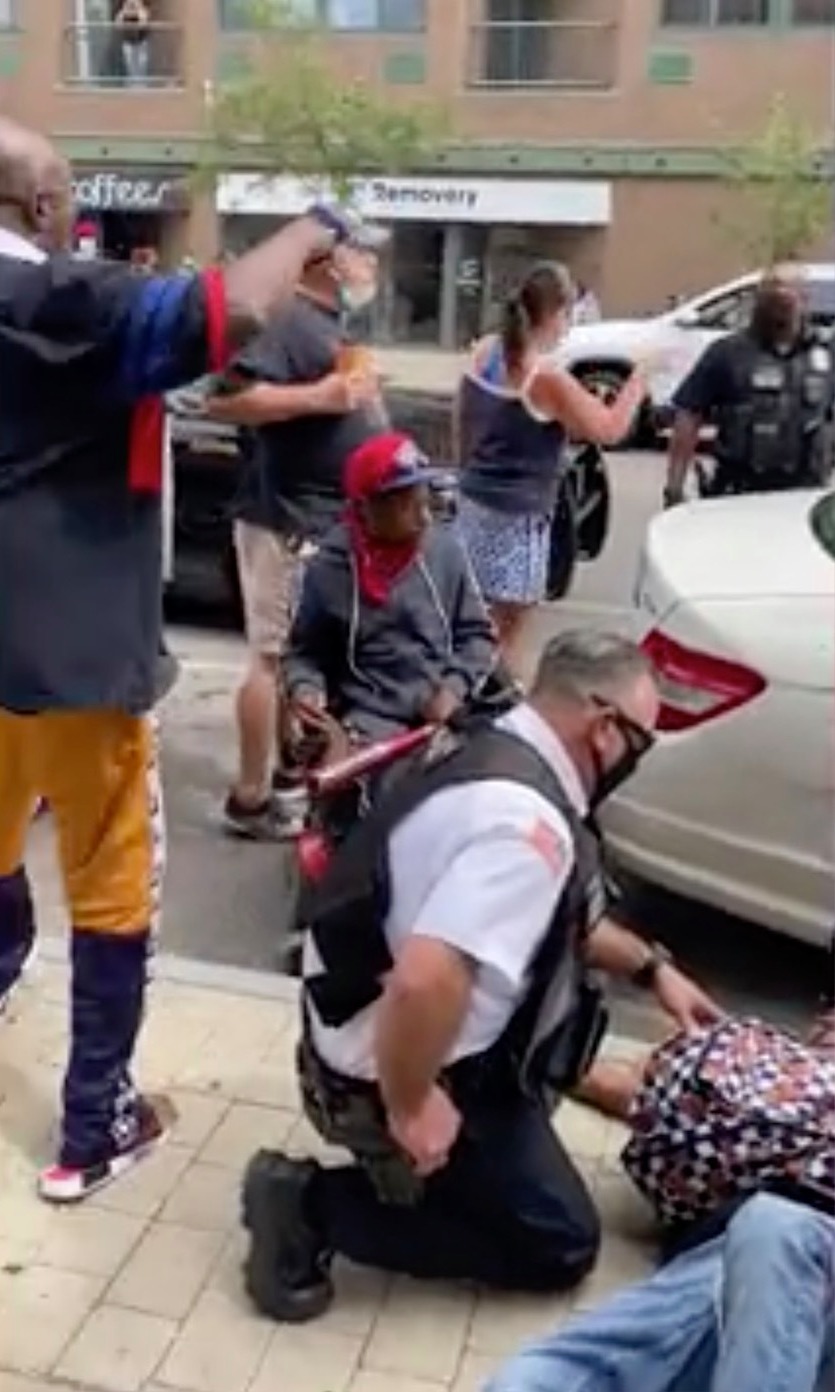 The black man stuck underneath the officer’s body can be heard shouting: “Get the f**k off of me.”

One person nearby questions whether the soldier is “a white supremacist.”

But another bystander in a red shirt, who appears to be on the phone, shouts: “Don’t make it about race! It is not about race!

“You do not know what’s been happening all day. At least understand the facts before you open your mouth. You have no business here, back away,” he later says. 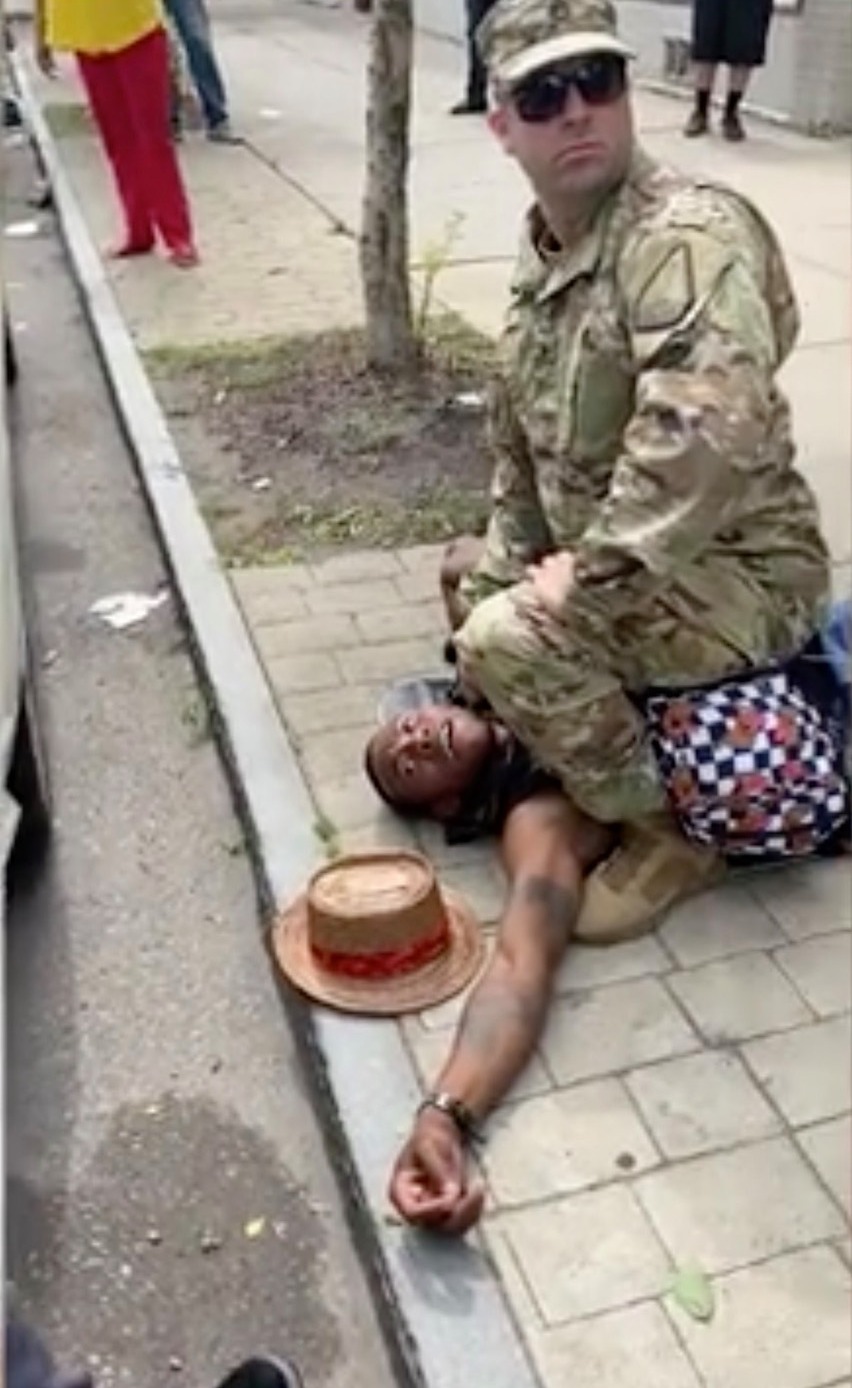 The man on the phone tells the growing crowd of witnesses that the black man who the soldier is holding down caused problems earlier, before the incident unfolded.

A woman soon begins shouting at the soldier for attacking the black man "for no reason.”

The man on the phone claims the black man spit on the soldier’s vehicle before he was punched, then said: “You think that’s fair?”

The woman said no, that punching someone repeatedly for spitting on your car is “not a fair exchange.” 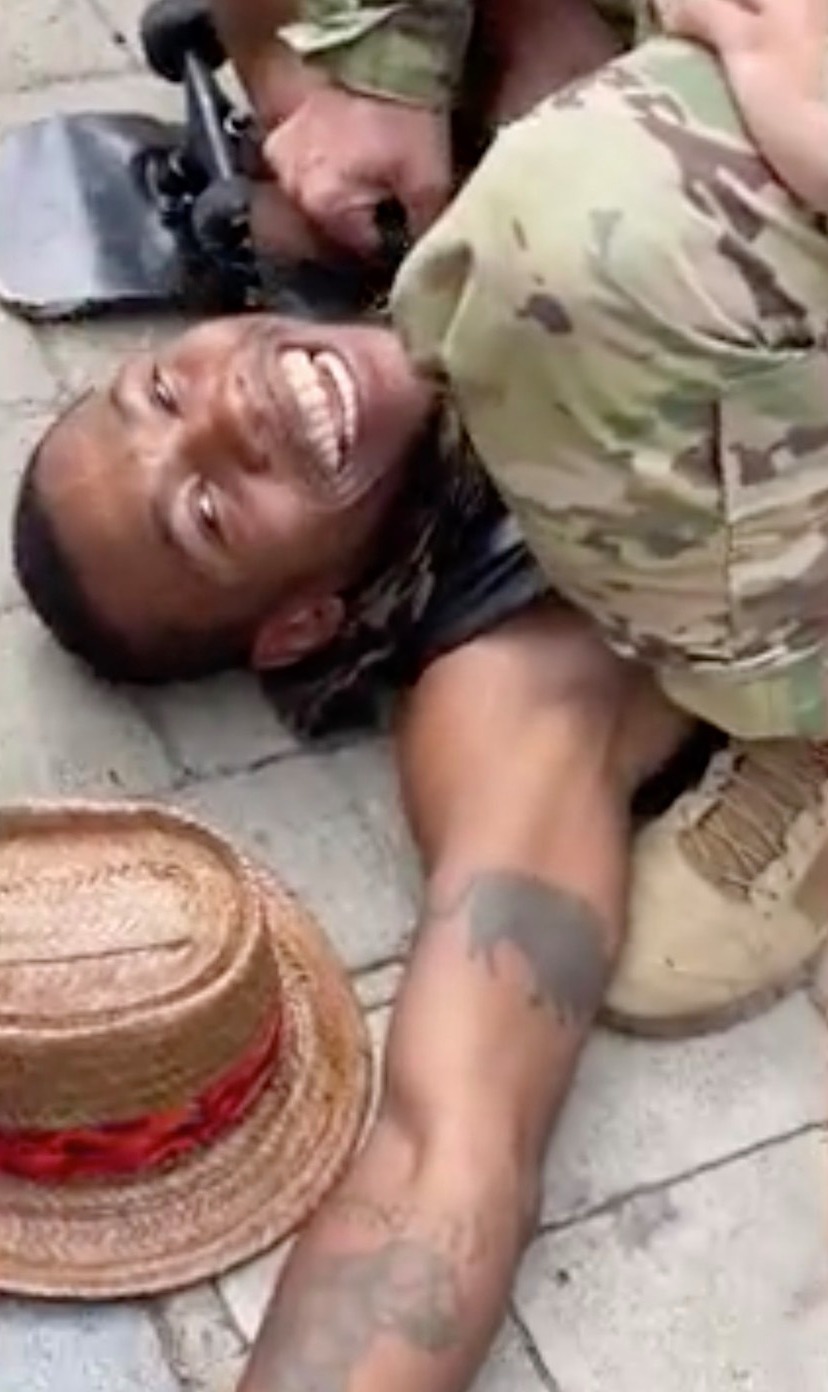 Another man at the scene shouts at the soldier: “You think you’re entitled because you’re in the Army? Go f**k yourself, dude.”

Hamideh told DailyMail.com he didn’t witness any earlier incidents, but did see the black man shouting at people in the street before the soldier punched him.

He said that a waitress in the neighborhood told him the man who was punched by the "soldier" had been causing problems in the area.

"He apparently flashed some girls a few days before," Hamideh said. 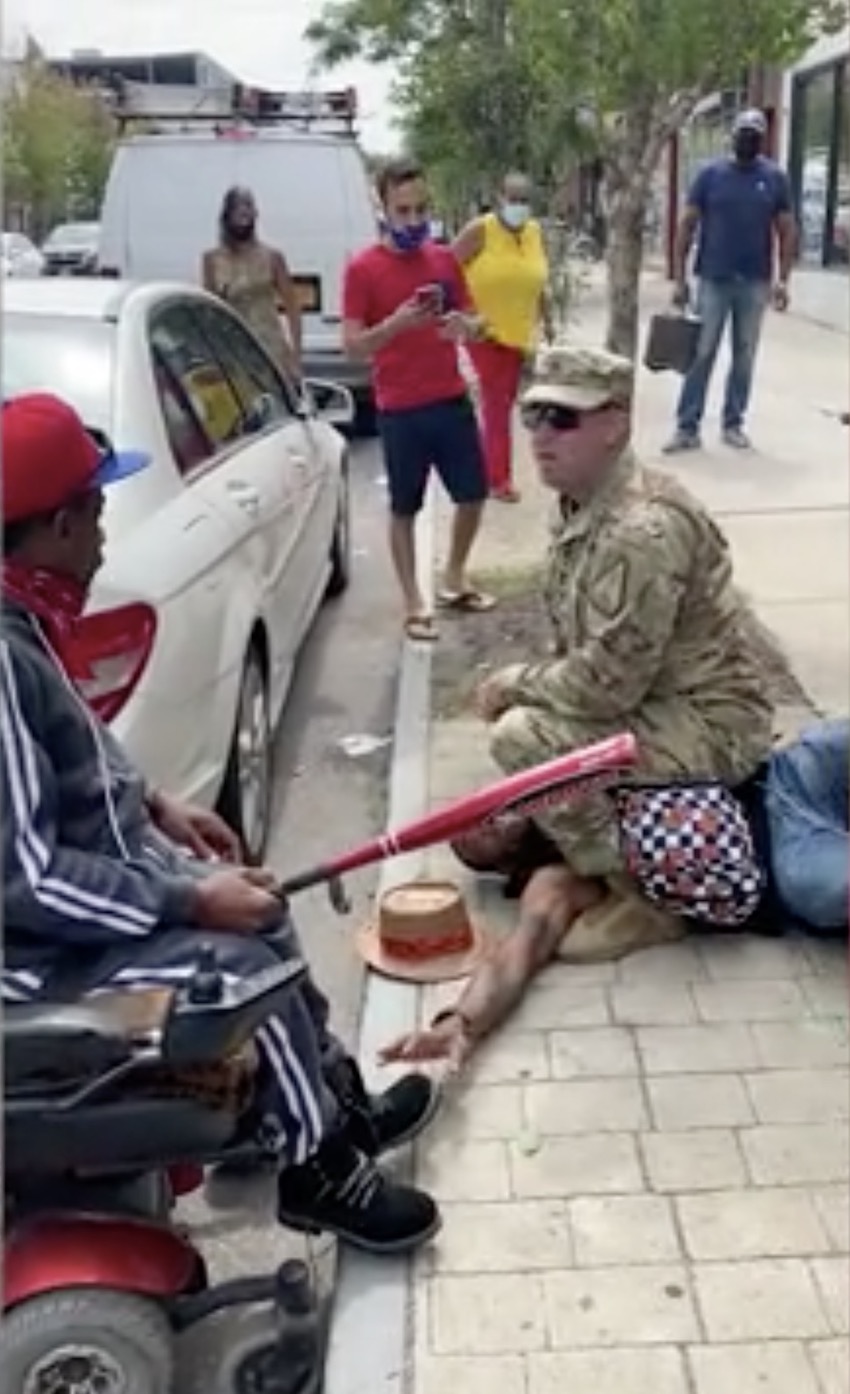 "He was causing problems in the neighborhood that day too. He was shouting incoherently in the street, and people were calling out from the balconies for him to leave."

Hamideh added that he thinks the argument started between the two people after the black man allegedly spit on the soldier’s car.

Hamideh said the man called the apparent military soldier a “p***y” and apparently shouted disparaging remarks at him.

Hamideh asks the black man, still underneath the soldier, if he can breathe OK. 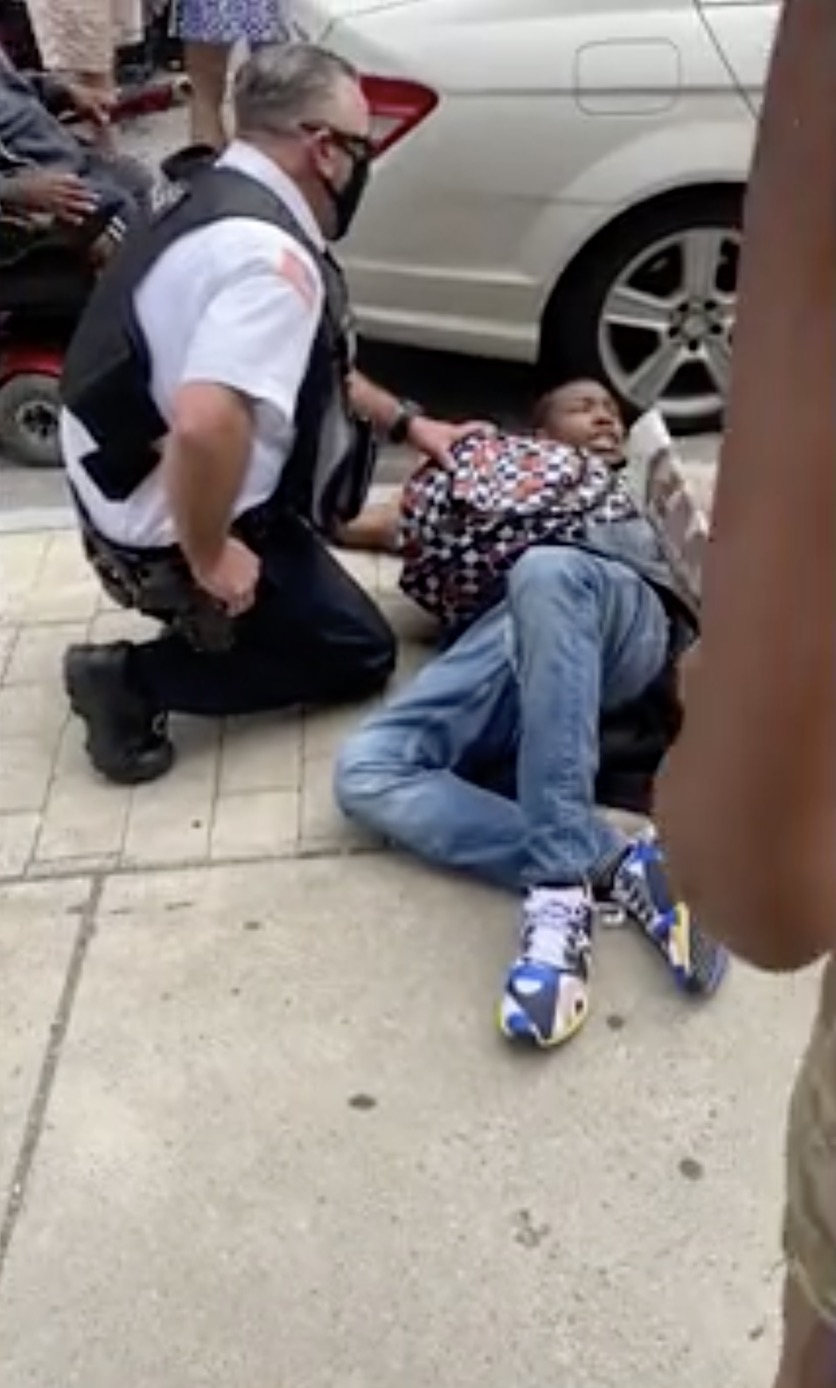 “Oh yeah man, I’m good,” the man says while smiling. “I’ve been waiting for this.”

Another witness, a black man in a wheelchair, is scene holding a baseball bat, before shouting: “Are you hitting people? Are you hitting our people?”

The soldier replies: “Oh yeah. I hit him.”

When accused of being racist, the soldier tells the witnesses: “I see a man as a man.

“He’s yelling and shouting at people in the street, then he comes over and spits on my car. Then he turned around on me. I’m not going to let him hit me first, man.”

Once cops arrive at the scene, the soldier walks away, but the man who was on the ground stays put.

It’s not clear what happened after the video stopped.

The Buffalo Police Department confirmed to The Sun on Friday morning that an investigation is underway.

The US Army did not immediately respond to a request for comment.

END_OF_DOCUMENT_TOKEN_TO_BE_REPLACED

END_OF_DOCUMENT_TOKEN_TO_BE_REPLACED
Recent Posts
We and our partners use cookies on this site to improve our service, perform analytics, personalize advertising, measure advertising performance, and remember website preferences.Ok