South Korea is closing schools and switching back to remote learning in Seoul after the country counted its 12th straight day of triple-digit daily increases in coronavirus cases.

Education Minister Yoo Eun-hae said today that at least 193 students and teachers were found infected over the past two weeks in the Seoul metropolitan region, where a viral surge has threatened to erase the country’s hard-won epidemiological gains.

Yoo said most children at kindergartens, elementary, middle and high schools will receive online classes at least until Sept. 11. High-school seniors will continue to go to school so their studies are not disrupted ahead of the crucial national college exams. 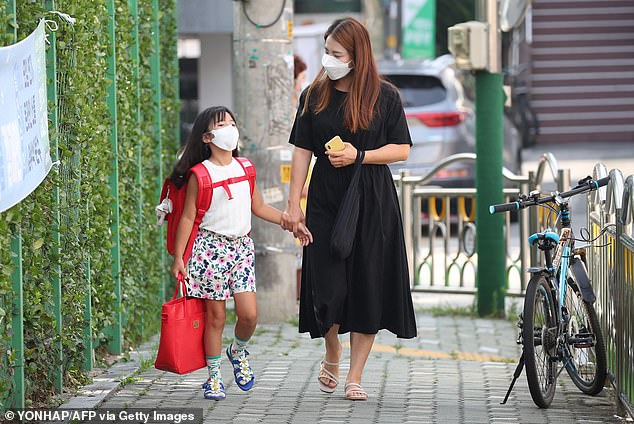 A mother and her daughter walk on their way to an elementary school in Seoul today. South Korea today ordered all schools and kindergartens in the greater Seoul region, which is home to half the country’s 52 million population, to switch to online classes from tomorrow until 11 September as they battle multiple COVID-19 coronavirus clusters 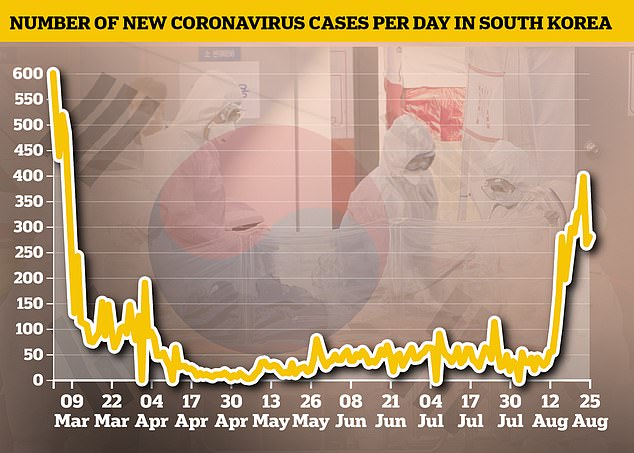 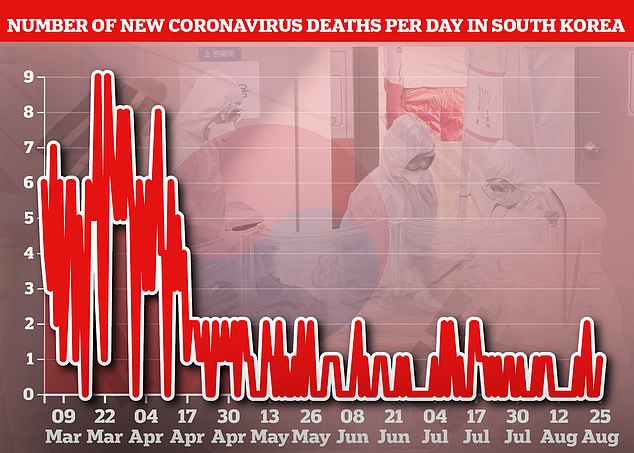 The country delayed the start of the school year for weeks because of an outbreak in the southeast in spring before proceeding with phased reopenings beginning in May.

Keeping schools shut is a difficult political decision in a country where teenagers are thrown into hyper-competitive school environments because graduating from elite universities is seen as crucial to career prospects.

‘The priority is to quickly stem the spread of transmissions and stabilise the situation, if only to hold the 3 December national college entrance exam as planned without disruption,’ Yoo said in a news conference.

The KCDC said 221 of the new cases came from the greater Seoul area, home to half of the country’s 51 million people, where churches emerged as major sources of infections before authorities shut them amid tightened social distancing restrictions. Infections have also been linked to schools, nurseries and other places. 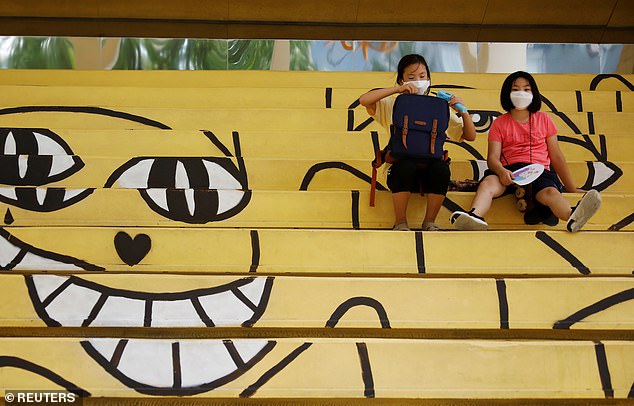 Students wearing coronavirus masks rest in Seoul, South Korea today.  Keeping schools shut is a difficult political decision in a country where teenagers are thrown into hyper-competitive school environments because graduating from elite universities is seen as crucial to career prospects

The country since Sunday has banned larger gatherings, shut down nightspots and churches and removed fans from professional sports nationwide. Officials say the country could be forced to elevate social distancing restrictions if the virus doesn’t slow after this week, measures that would batter an already weak economy.

Churches had been emerged as major sources of COVID-19 cases before authorities banned on-site worship services.

As of Tuesday afternoon, 915 infections were linked to a northern Seoul church whose pastor led a march of thousands of anti-government protesters earlier this month. The pastor is among those who developed COVID-19.

Nearly 200 infections have been linked to the Aug. 15 rallies as health authorities pleaded church members and protesters to come forward for testing. Many have remained out of contact or refused to get tested. Officials have expressed concern over conspiracy theories that the government was manipulating test results in a plot to shut down the church.

‘I plead to you once once again: if we contact you and ask you to get tested, please get tested,’ said Kwon Jun-wook, director of South Korea’s National Health Institute, during a virus briefing. ‘COVID-19 can’t distinguish between political stances. It doesn’t know the different kinds of religions that exist. It doesn’t have a concept of ideology or beliefs. There’s no way a virus has such things.’

END_OF_DOCUMENT_TOKEN_TO_BE_REPLACED

END_OF_DOCUMENT_TOKEN_TO_BE_REPLACED
Recent Posts
We and our partners use cookies on this site to improve our service, perform analytics, personalize advertising, measure advertising performance, and remember website preferences.Ok