Subpostmasters wrongly accused of theft, fraud and false accounting in Horizon IT scandal are facing ‘imminent financial ruin’ and should be compensated, inquiry hears

Postal workers wrongly accused of theft, fraud and false accounting should be compensated by the Post Office and Government as they now face ‘imminent financial ruin’, an inquiry has heard.

The Horizon scandal saw 736 subpostmasters and subpostmistresses (SPMs) prosecuted between 2000 and 2014 based on information from the accounting system, installed and maintained by Fujitsu.

It saw hundreds of innocent Post Office staff sacked, bankrupted or wrongly convicted due to glitches in the Horizon accounting system which displayed cash shortfalls. 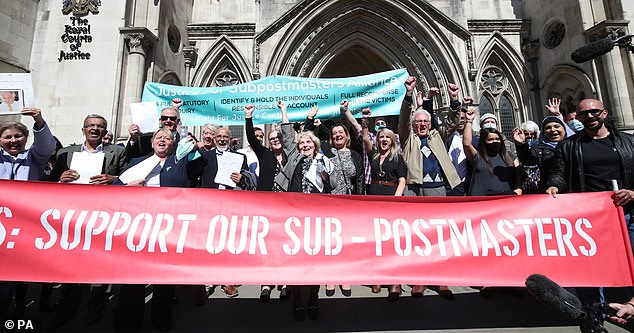 Pictured in April 2021, former post office workers celebrating outside the Royal Courts of Justice after their convictions were overturned, and now the inquiry into the scandal hasbeen launched

But in December 2019, a High Court judge ruled that Horizon’s system contained a number of ‘bugs, errors and defects’ and there was a material risk that shortfalls in the Post Office branch accounts were caused by the system.

Dozens of SPMs have had their criminal convictions overturned since then, and now the inquiry into the scandal has begun.

‘The truth of it is people are in financial ruin.

‘People will lose their homes unless something is done urgently to assist them.

‘Some may not survive the lifetime of this inquiry due to stress-related illnesses.

‘This scandal has always been about money and reputation.

‘On the one hand the Post Office presented a dishonest picture of its finances and its system, and sought to preserve its reputation at all costs, on the other the Post Office attacked the financial integrity of SPMs and destroyed their reputations.

‘Despite the judgments in the High Court, civil court of appeal, and the court of criminal appeals, SPMs are still not in receipt of any adequate financial redress.’

The court heard of the ‘stigma’ and ‘reputational loss’ suffered by those falsely accused of theft, fraud and false accounting. 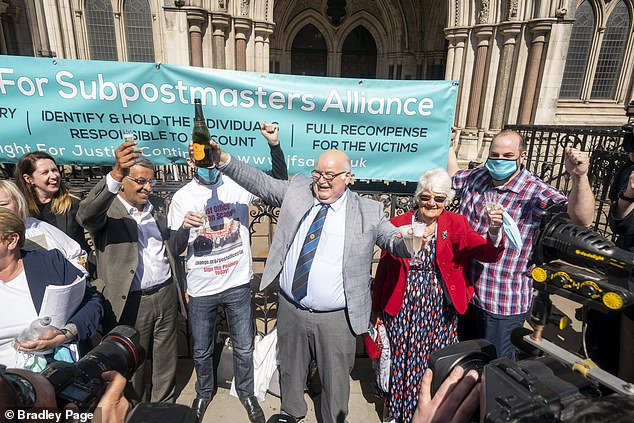 Pictured in April this year, postmaster Tom Hedges (centre) celebrating outside the High Court in London after 39 former subpostmasters, convicted of theft, fraud and false accounting due to the Post Office’s defective Horizon accounting system had their names cleared by the Court of Appeal

‘All of our clients experienced terrible stigma in their communities, which in many cases remains to this date,’ he said. ‘In the hearings that will start next year, you will hear heart-rending accounts of those whose children were bullied or spat at.

‘Those who died before their names could be cleared, and many who contemplated or attempted suicide.

‘Many suffer still under the stigma of years of reputational loss.’ Mr Stein also demanded that the Post Office repay the legal costs of the SPMs’ High Court civil litigation.