A convicted terrorist has denied grooming Manchester Arena attacker Salman Abedi into extremism despite exchanging messages with him about martyrdom before the suicide bombing.

Abdalraouf Abdallah, 28, today told the hearing into the May 2017 Manchester Arena attack that he played no part in grooming Abedi, 22, into an extremist mindset before he caused carnage at the end of an Ariana Grande concert.

Abdallah had been convicted of preparing and funding acts of terrorism in 2016 after helping four men from Manchester travel to Syria – where three of them fought for Islamic State.

His mobile phone was seized when he was arrested in late November 2014 on suspicion of those offences and later analysis revealed more than 1,000 message exchanges with Abedi in the weeks before, including discussions about martyrdom.

Abdallah, a paraplegic and serving prisoner at HMP Wakefield who was injured fighting against Gaddafi’s forces in 2011, said the martyrdom chat was ‘nothing to do with extremism or terrorism’ and was about friends who had died in conflict.

But a radicalisation expert instructed by the inquiry has now concluded that Abdallah did groom Abedi into a ‘violent Islamist extremist worldview’, and will give evidence later in the inquiry.

MailOnline had reported in 2017 that the Manchester Arena suicide bomber had visited a Abdallah in a British prison just months before he killed 22 people in the suicide bomb attack. 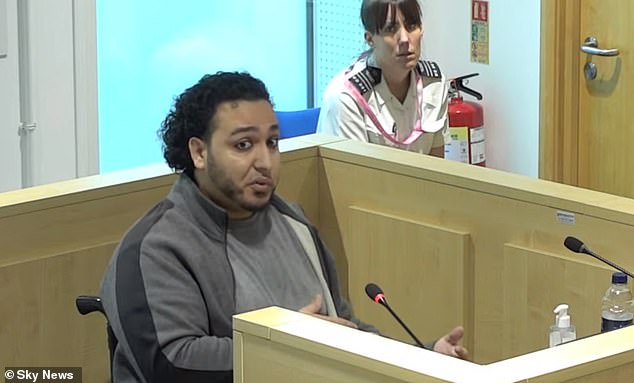 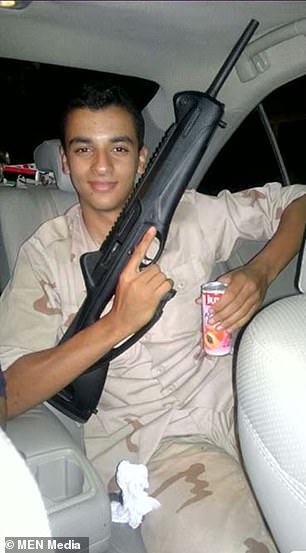 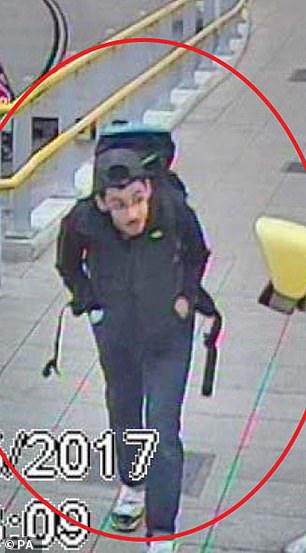 Abdallah  has today told the hearing into the May 2017 Manchester Arena attack that he played no part in grooming Abedi, pictured, into an extremist mindset before he caused carnage at the end of an Ariana Grande concert (left: Abedia in Libya. Right: At Victoria Station making his way to the Manchester Arena, on May 22, 2017)

Paul Greaney QC, counsel to the inquiry, asked: ‘In those messages, or some of them, were you grooming or seeking to groom Salman Abedi into an extremist mindset?

Abdallah said: ‘No, I don’t even have an extreme mindset myself. My fight from the start was against Gaddafi and (Syrian leader) Assad so I’m not a groomer. I was not grooming Salman or anyone.’

Mr Greaney went on: ‘Do you accept that the type of discussion you were having with Salman Abedi played at least a part in what caused him to become radicalised?’

Abdallah said: ‘I never knew that he was radicalised. I didn’t play any part of radicalising.’

Inquiry chairman Sir John Saunders asked: ‘Did you ever have any suspicion that he would become a suicide bomber?’

Abdallah replied: ‘No, no way. Not me or my friends or anyone had any idea what was going on in Salman’s head.’

He said when he learned of the news in prison that his friend was the bomber, he was ‘crying, confused and shocked’.

Abdallah said: ‘It’s something that I can never, ever, ever take out of my mind and it is haunting me until now because he is my friend.

‘I got convicted, went to prison and I was busy with my life. I have seen him twice after my conviction, in prison, and called him a couple of times but he only answered twice and that’s all I know.

‘Until now it’s haunting me. It’s still going in my head now. Why? When? How come?’

Abdallah’s family had fled Libya in the early 1990s and were granted asylum in the UK, moving to South Manchester along with Abedi’s family, who also opposed the regime of Colonel Gaddafi at the time.

Abdallah unsuccessfully appealed against his terror conviction and maintains his innocence.

He also denies any involvement in or knowledge of the arena attack.