Bangkok: Thailand will jail human rights lawyer Arnon Nampa and another activist for breaching their bail conditions following their earlier arrests over anti-government rallies, one of their lawyers said on Thursday.

A Thai court on Thursday revoked the bail of Arnon and Panupong Jadnok for breaching the conditions of their release. 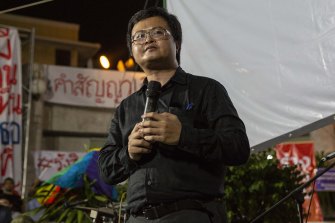 The pair will be held in pretrial detention at a remand prison, Arnon's lawyer, Weeranan Huadsri, said.

Their arrests were among more than a dozen in recent weeks for sedition and on charges related to demonstrations that police say were in breach of a ban on gatherings imposed to prevent coronavirus infections.

They were granted bail last month on charges including sedition arising from a protest rally in Bangkok in July.

Police said their continued involvement in demonstrations violated the terms of their release and wanted the court to order them back into custody. 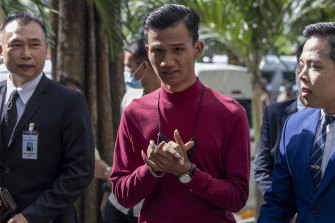 Pro-democracy activist Panupong Jadnok (centre) arrives at a Bangkok court for a hearing to determine whether he had violated his bail conditions.Credit:AP

Both men are key figures in the growing protest movement and are among those who are calling for reform of the monarchy, a revered institution that is protected by draconian anti-defamation laws.

Speaking to reporters before the hearing, Arnon said he hoped the court would allow him to walk free but did not believe that his imprisonment would deter the movement.

"If there is a political accident that puts me and Mike [Panupong] in jail, I will treat it as a complete proof of our participation in the movement, that we fought the best we could," Arnon said.

"Then, I hope that our imprisonment could serve as an inspiration for those who will continue fighting."

The growing protests have emerged as the most serious threat to Prime Minister Prayuth Chan-ocha, a former army general whose administration they accuse of incompetence and corruption.

The student-led movement has declared three core demands: holding new elections, amending the constitution and ending the intimidation of critics of the government. Some activists go further, calling for far-reaching reforms to the institution of the monarchy.

The authorities have taken legal action against more than 30 key figures in the movement in an apparent attempt to decapitate it and stall its momentum.

"Let my jailing today be the receipt of harassment against the people. On 19 Sept 2020 go take it back," Arnon posted on Facebook.

The most important news, analysis and insights delivered to your inbox at the start and end of each day. Sign up to The Sydney Morning Herald’s newsletter here, to The Age’s newsletter here and Brisbane Times‘ here.

END_OF_DOCUMENT_TOKEN_TO_BE_REPLACED

END_OF_DOCUMENT_TOKEN_TO_BE_REPLACED
Recent Posts
We and our partners use cookies on this site to improve our service, perform analytics, personalize advertising, measure advertising performance, and remember website preferences.Ok