Reality appeared to hit US President Donald Trump this week when the General Services Administration gave approval for the transfer of presidential power to Joe Biden to begin. But don't be fooled: reality will not be where Trump wages a long campaign against President-elect Joe Biden.

The assault will be conducted in the realm of unreality, as Trump's Twitter account shows. "Our case STRONGLY continues, we will keep up the good fight, and I believe we will prevail!" "RIGGED ELECTION!" "2020 is a long way from over". He participated by phone in hearings in the Pennsylvania State Senate on the issue of "massive voter fraud". 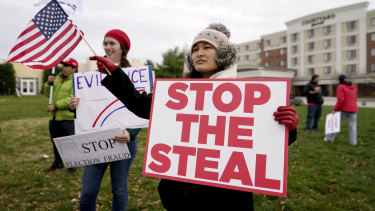 Supporters of President Donald Trump rallying for an unreal event: the theft of an election.Credit:AP

The disconnect with the facts on the ground recalls how Trump questioned president Barack Obama's citizenship during his terms in office. Now Trump is again trying to create something – the perception of a "stolen" election, charges of illegitimate power, Biden “voter fraud” claims – from nothing.

It appears effective, too: While one third of US voters believe Biden won because of voter fraud, 77 per cent of Republicans believe that's the reason for his victory, according to a Monmouth University poll.

History will be clear that Biden won. But the problem for Biden isn’t history: it’s the present. And the risk today is that Biden chooses the same course that Obama did.

Because even through Trump's claims are untrue they will flourish online and in the minds' of his supporters, the meaning of every event reversed-engineered through a polarised pro-Trump alternative-media ecosystem. This unreality is not simply lies but an alternate and skewed interpretation of reality that is completely immersive. It will prompt actions in real life: rallies, protests, motions in government, public statements and possibly, violence.

In this way, Trump’s undermining of Biden parallels not just the “birtherism” promoted by the former reality TV star as far back as 2011 for Obama, but another event that occurred in 2015: Operation Jade Helm.

That year, during the Obama Administration, the US Defence Department conducted an eight-week joint military interagency and exercise conducted from Texas to California, including Arizona, New Mexico, Colorado and Utah.

For reasons still unclear, rumours began to spread on the internet that Operation Jade Helm 2015 wasn’t a routine military training exercise but something much more menacing: the Obama Administration imposing martial law, testing plans to seize the guns of locals, and use “recently closed Wal-Marts to stockpile supplies for Chinese troops who will be arriving to disarm Americans”.

As word spread, the Department of Defence pushed back with transparency offering explanations, reassurances and clarity. The US government even published a map of the planned exercise, which were seized on as more evidence of a malign plot afoot.

Local residents were alarmed enough that the Governor of Texas dispatched observers to a town where the military operation would pass through to ensure that US troops were following the law, and not, um, imposing martial law.

Obama later said Jade Helm was his “favourite” conspiracy theory – perhaps not realising that Jade Helm, like the other conspiracy theories aimed at his presidency, further corroded faith in him and the US political system.

Conspiracy theories' "primary function" is "to promote a political or ideological agenda rather than to tell the truth", according to University of Warwick Professor Quassim Cassam. Trump's strategy since the November 3 election backs that hypothesis. 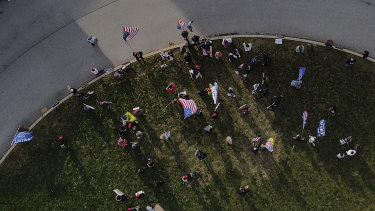 Real supporters of President Donald Trump gather in Pennsylvania around a fake cause: the theft of the 2020 election. Credit:AP

The Atlantic three years ago published an article that underscores this. In 2016, the Twitter account for WikiLeaks (the same one we keep hearing about as an exemplar of media freedom) messaged Trump’s son Donald jnr with some advice about a potential election loss: "Hi Don if your father ‘loses’ we think it is much more interesting if he DOES NOT conceed [sic] and spends time CHALLENGING the media and other types of rigging that occurred—as he has implied that he might do. He is also much more likely to keep his base alive and energised this way…"

Whether Trump took this specific advice is unknown, but the message highlights the political dimension to election denialism.

The alternate-reality promoted by Trump, his "Jade Helming" of the 2020 election result, will not fade away on its own. Rather, it will fester and intrude on real-world politics. The Biden Administration should reckon with the issue now and pursue a strategy to shrink the unreality being brought to life before our eyes.

If not, this upside-down world cultivated by Trump will shape the terrain for Biden, and by extension, lawful democracies everywhere in the years ahead.

END_OF_DOCUMENT_TOKEN_TO_BE_REPLACED

END_OF_DOCUMENT_TOKEN_TO_BE_REPLACED
Recent Posts
We and our partners use cookies on this site to improve our service, perform analytics, personalize advertising, measure advertising performance, and remember website preferences.Ok