Adam Hooper doesn’t have a fixed address or a stable job, but he helped facilitate 437 births last year.

The 36-year-old is the face of informal sperm donation in Australia – a cheaper and increasingly popular alternative to using donor sperm at IVF clinics that authorities are largely powerless to regulate. 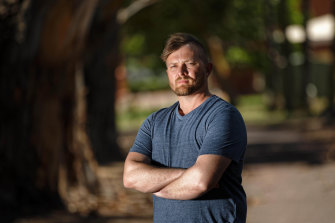 His popular Facebook group, Sperm Donation Australia, boasts more than 11,000 members and matches sperm donors with those hoping to start or expand their families.

Last year, as Australians went in and out of lockdown and IVF clinics cancelled appointments and grappled with sperm shortages, an additional 4000 people joined his page.

“There is a human evolutionary instinct that kicks in when we feel threatened,” Mr Hooper said. “People want to procreate.”

The self-described nomad, who has spent the past few months travelling Australia in a four-wheel-drive, securing work as a fruit picker along the way, doesn’t like the term “informal sperm donor”.

“When you use a clinic you don’t meet and get to know the donor,” he said. “That’s the definition of informal.”

But it’s a term used by the Victorian Assisted Reproductive Treatment Authority, which warns that informal sperm donation is putting recipients, donors and children at risk.

It says unlike IVF clinics, proper records are not kept about informal donors, making it difficult for children to track down their biological parents. It has also raised concerns about sexual assaults, the absence of mandated health checks and donors exceeding the state’s 10-family limit.

Mr Hooper said while there were risks associated with other sperm donor Facebook pages and apps, he ran thorough checks on every member.

He said he contacted VARTA a few years ago and proposed creating a shared register for private sperm donors – which would record identifying details of donors for their offspring – but never heard back.

Under current laws, donors can only be added to VARTA’s donor conception register if they have donated via a clinic.

VARTA chief executive Anna MacLeod said that the authority was not legislated to regulate sperm donation that occurred outside of clinics.

While informal sperm donation is not illegal, Victorian laws state that donors cannot create children for more than 10 families.

“I am very happy to meet with Mr Hooper to discuss informal sperm donation,” Ms MacLeod said. “I would particularly like him to inform his members about the risk of breaching Victoria’s 10-family limit. The limit means a donor (informal or not) is limited to creating children for up to 10 families, including their own … many donor-conceived people have described their distress at having large numbers of siblings they could unwittingly form an intimate relationship with.”

He joined an existing Facebook group for sperm donors but said he found himself in the company of men with “bad intentions”.

“There was one guy in the group for the wrong reasons. He was more of a sexual predator. That was one of the reasons I decided to create my own page.”

Mr Hooper screens every person who wants to join his group by checking out their Facebook page (they are knocked back if they “like perverted stuff”) and asking them to respond to a series of questions. They are blacklisted if they post anything inappropriate.

He said he was unaware of any sexual assaults taking place through the group and the most common complaint he received was that a sperm donor was running late.

He said he was yet to encounter any legal issues, and donors and recipients were encouraged to formalise their arrangements with written contracts.

While out-of-pocket IVF expenses can amount to up to $7000 for each cycle and the cost of home insemination equipment is less than $10, Mr Hooper said people were not drawn to his page to save money.

“We’ve got doctors and lawyers who come onto the page to find a donor. For them, money is not an issue, it’s really the importance of connection.”

According to Mr Hooper, those seeking to donate sperm were usually heterosexual men whose children were growing up, while recipients were an even mix of same-sex couples and single mothers by choice.

He said heterosexual couples preferred to use IVF clinics, because the men felt uncomfortable discussing their fertility issues with other men.

Mr Hooper has two children with his ex-wife and has donated sperm to 15 families. He says he hasn’t breached Victoria’s limits because the donations occurred interstate and overseas.

“We don’t consider the kids a trophy,” he said, referring to prolific US sperm donor Joe Donor, who claims to have fathered more than 100 children.

“We are not hunting numbers. We want to help each individual start a family.”