Home » World News » ‘The NHS is not for sale’: Tory leadership hopefuls in Trump warning

‘The NHS is not for sale’: Tory leadership hopefuls in Trump warning

‘The NHS is not for sale’: FOUR Tory leadership hopefuls join Jeremy Corbyn and union leaders in handing warnings to Donald Trump after he says it should be part of a trade deal

Donald Trump was today warned that the NHS was ‘not for sale’ by Tory leadership hopefuls after he suggested the health service should be party of a future trade deal.

Candidates from across the party including Brexiteer Dominic Raab and Remainer Sam Gyimah distanced themselves from the US president’s views after he spoke out this afternoon.

Negotiations on a future trade deal after Brexit will be carried out under Theresa May’s successor and the US will be keen for all areas of the British economy to be covered.

At a joint press conference with the Prime Minister, Mr Trump said: ‘When you’re dealing in trade everything is on the table so NHS or anything else, a lot more than that, but everything will be on the table, absolutely.’

Health Secretary Matt Hancock was among those who hit back, saying: ‘Dear Mr President. The NHS isn’t on the table in trade talks – and never will be. 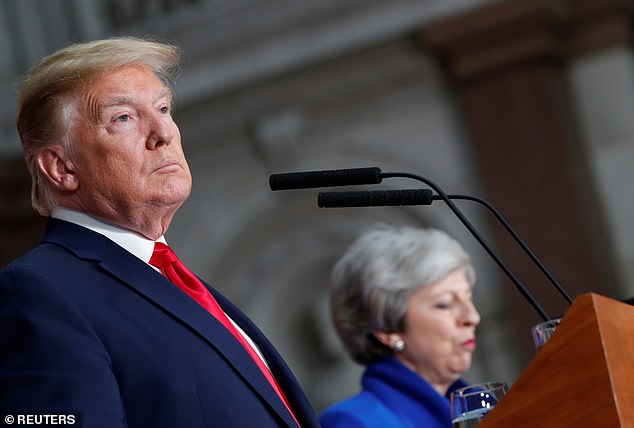 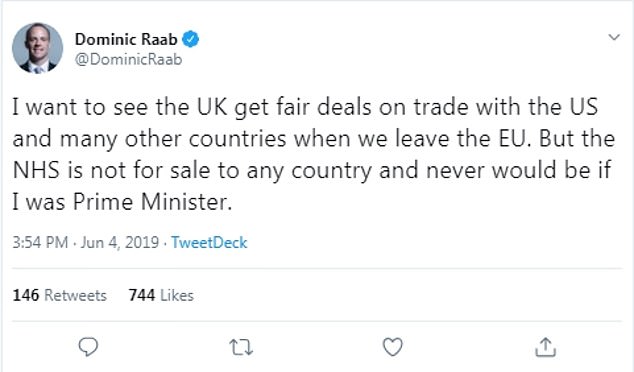 Mr Raab said the NHS ‘is not for sale’ and would not be if he was in Number 10.

Fellow Tory leadership contender Sam Gyimah also hit back at Mr Trump’s suggestion, saying the NHS ‘should not be used as a bargaining chip’ in the talks.

And International Development Secretary Rory Stewart said he would not be ‘offering up’ the NHS in any trade deal.

But Mrs May said ‘the point in making trade deals is of course that both sides negotiate and come to an agreement about what should or should not be in that trade deal for the future’.

Labour leader Jeremy Corbyn claimed ‘Tory leadership contenders’ and Nigel Farage were ‘lining up’ a US trade agreement as part of their plans for a no-deal Brexit.

‘They all need to understand: our NHS is not for sale,’ he said.

Sara Gorton, head of health at the Unison union, said: ‘The Government shouldn’t stoop to allowing the NHS to be used as a bargaining chip.’

The GMB union’s national secretary Rehana Azam said Mr Trump is ‘just waiting to get his hands on our NHS’ and ‘there’s a very real danger Conservatives will just hand it over to him in a trade deal’.

British Medical Association council chairman Dr Chaand Nagpaul said: ‘We have an unequivocal message for the next Conservative leader and future prime minister: profit should never take priority over the protection of the health service and the healthcare of citizens.’

Liberal Democrat leadership hopeful Sir Ed Davey said: ‘Those who called for Brexit on the basis it would mean better trade deals for the UK should hang their heads in shame.’