The Perfect Moment for Vegan Tacos

Hibiscus asada, vegetable trompos and nutty chorizos — thanks to creative cooks in Los Angeles, meatless tacos are thriving in the pandemic era. 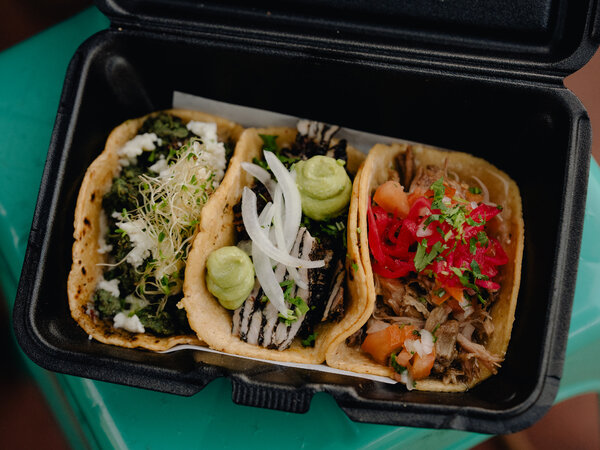 LOS ANGELES — On a recent Saturday morning, the chef and writer Jocelyn Ramirez faced the camera on her laptop, dug her hands into a bowl of pale, unripe jackfruit, and pulled it apart with her fingers for a rapt audience on Zoom.

Ms. Ramirez, who recently published the cookbook “La Vida Verde,” studied vegan cooking after her father’s second diagnosis of cancer. She quickly learned that although unripe jackfruit doesn’t taste like much, once it’s stained with a paste of achiote seeds and chiles, soaked with orange and pineapple juices, generously seasoned and crisped in a cast-iron pan, it transforms.

The fruit’s soft, shredded petal-like pieces take on a satisfying, crisp-edged texture, as if they’ve been browned on a vertical spit. This is to say, in the hands of a good cook, a jackfruit taco can take on the best qualities of a juicy taco al pastor. 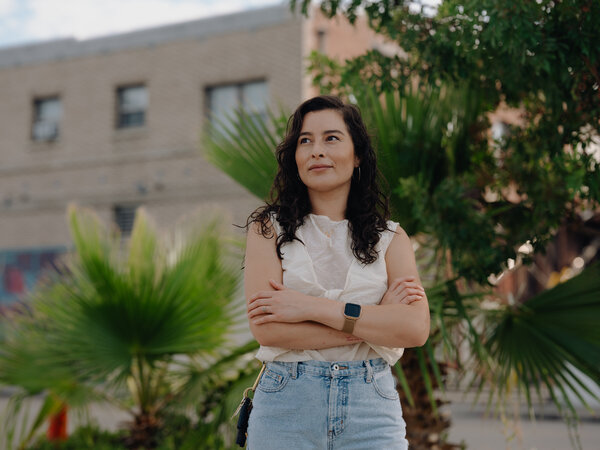 A generation of cooks, many of them driven by an interest in traditional ingredients and community health, have turned their attention to vegan tacos for years, tinkering with established dishes, and creating new ones. But their work is often pushed to the side, or classified as a substitute for the real thing — the real thing being meat.

This past spring, taqueros across the city were forced to change their purchasing habits day to day, shifting to different meats or cuts, rewriting their menus as needed, some going partly or temporarily vegetarian. Alex Garcia and Elvia Huerta of Evil Cooks took carne asada off the menu when beef prices tripled, soaring from less than $3 a pound to more than $9 a pound. And the habits they formed early on during the supply-chain breakdown have stuck: When beef prices leveled out again, Mr. Garcia and Ms. Huerta didn’t go back to buying it. Mr. Garcia, who started cooking and eating more vegetarian food to help manage his diabetes, found that under the restrictions of the pandemic, he and Ms. Huerta had an opportunity to push their ideas forward.

Street vendors are marginalized and unprotected, and generally more vulnerable than workers at brick-and-mortar restaurants. But they do have one small and unlikely situational advantage during the pandemic: Their businesses are tiny, nimble and already modeled around workers who cook safely in the outdoors, and diners who eat quickly outdoors, or carry the food to go.

Mr. Garcia and Ms. Huerta used to travel all over the city, setting up their kitchen out of a small black van covered with stickers. But since the first lockdown in Los Angeles, they’ve become a stationary enterprise, assembling a tent in their front yard in El Sereno.

Like most taqueros, they fly signs outside, and theirs are decorated with illustrations and cheerfully goth copy, like a highly self-aware metal band. They hype the dishes they’re best known for: green chorizo tacos and black tacos al pastor, as well as dessert tacos filled with flan and crisp churros, carefully seasoned and beautifully garnished.

In the past, their style has been met with cynicism. “A lot of traditional people said we want to gentrify Mexican food,” said Mr. Garcia, who was born in Celaya, in the Mexican state of Guanajuato. “But I tell them, black pastor comes from Yucatán — it is traditional!”

The chef Roberto Solís established the style in Mérida, using the Mayan-style spice paste recado negro on a vertical spit known as a trompo. To make his own version, Mr. Garcia slowly and thoroughly blackens chiles, which form the base along with burned tortillas and cacao. Mr. Garcia and Ms. Huerta have applied it to pork (traditional) and to soy (a bit less traditional) and also to vegetables.

Their latest vegan trompo is made from Napa cabbage, mushrooms, eggplant and onion, immersed in the recado negro, stacked and compressed to form a dark minaret, then slowly turned by the fire so the finest layer of crackle and char can develop.

For years, taco culture has been revised like this, through experimentation in kitchens, and in backyards, its subgenres expanding and shifting with the availability of ingredients, and flourishing in the hands of creative cooks.

Vegan tacos are often left out of the conversation, but if there’s a taco that illuminates this moment in Los Angeles — the uncertainty, the constraints, but also the resilience of the cooks working through them, eager to nourish and sustain their businesses and their communities — it might be a black vegan taco al pastor. It floats on a soft, freshly made corn tortilla, seasoned with a little guacamole, onion and a dribble of life-affirming salsa.

Vegetarian and vegan taco fillings aren’t new. You can trace their lineage back through Indigenous cuisines, and the cooks who worked with regional flowers, fruits and vegetables, long before the introduction of pork, by colonists.

The genre has a history here in Los Angeles, too — Plant Food for People started selling jackfruit carnitas a decade ago, and in 2018, the vegan tacos from Taqueria La Venganza won a fierce citywide taco competition hosted by the local publication L.A. Taco, beating out more well-known meat tacos.

“That was a pivotal moment,” said Javier Cabral, who scouted contestants for the battle that year, and is now the editor in chief of L.A. Taco. “That was the first time the city, and the food media, saw that vegan tacos weren’t just a fad, and they weren’t just something hipsters were eating.”

Vegan taco stands were concentrated in more gentrified neighborhoods, with a mostly white customer base. But Mr. Cabral notes that their audience has slowly expanded, in part thanks to vendors like Vegatinos, making hulking vegan versions of regional Mexican foods — tacos de suadero and chicharrón, pozole and Jalisco-style birria.

“That’s been key in winning over the old-school demographic,” Mr. Cabral said. “Nothing fancy.”

In June, Alex Vargas of Vegatinos opened El Cocinero Restaurant, in the San Fernando Valley. And this week, Stephanie Villegas, who runs the pop-up Xochitl Vegan, will open a kitchen in a corner store in East Los Angeles.

Ms. Villegas had been working as a makeup artist at Nordstrom, and started making grilled hibiscus tacos about three years ago, when her hours at the beauty counter were cut. She read as much as she could about the history of cooking with the flower, which can soak up flavors like a sponge when it’s rehydrated, and can have a pleasingly soft and chewy texture.

“But at first it was too bitter, or it was too sour, or too rubbery,” she said. “When I messed around with how many times I boiled it, and when I put the hibiscus flowers in an asada marinade, then I just fell in love with it.”

Ms. Villegas named her business after the word for flower in Nawat, an Indigenous language spoken by her mother’s side of the family, who come from El Salvador. She started with a pop-up in Leimert Park, in South Los Angeles, and expanded her menu beyond hibiscus as she saw more and more demand for vegan foods.

At her new location, she’ll serve tacos, pupusas and veggie burgers, as well as vegan chorizo — the chubby links packed in a fine, starchy casing, made not from meat but from walnuts, lentils and a variety of raw nuts and seeds, which create the hodgepodge texture of a coarsely ground sausage and brown nicely in a hot pan.

Denise Vallejo grills vegetables and makes wheat gluten, or seitan, from scratch for some of her vegan tacos and tamales (which sold out within hours of becoming available to preorder online, through Instagram, a couple of weeks ago). The seitan is shaved thinly, but remains juicy, with a tender chew, and the smell of it sizzling on the grill draws a crowd.

But as soon as the lockdown was in place, and fewer people went out, Ms. Vallejo worked to adapt her business model.

She focused on taco kits — a deli container of homemade, marinated and fried seitan, or grilled vegetables, with salsas and other garnishes, and a pack of Kernel of Truth tortillas — which diners preordered with scheduled pickup times, then assembled at home.

At first, it wasn’t clear if she’d get by, but after a few months, Ms. Vallejo was doing more business with vegan taco kits than she had before the pandemic.

She started to expand the to-go menu, to make granola with nuts and seeds, and fresh salsas with charred tomatoes and garlic, and huge batches of her rich salsa macha. She took orders for her pumpkinseed pâté modeled on a traditional Mayan dish, and her Oaxacan-inspired cashew cheese.

“These new vegans got it easy,” she said, remembering how limited vegan food used to be, just over a decade ago. “The cheese! The cheese was awful.”

END_OF_DOCUMENT_TOKEN_TO_BE_REPLACED

END_OF_DOCUMENT_TOKEN_TO_BE_REPLACED
Recent Posts
We and our partners use cookies on this site to improve our service, perform analytics, personalize advertising, measure advertising performance, and remember website preferences.Ok