Cleared for take-off! Three-wheeled flying car built in the Netherlands wins approval to drive on the roads – but will set you back £270,000

A £270,000 three-wheel flying car built in the Netherlands has won approval to drive on the roads.

The PAL-V Liberty has been cleared for lift off by Europe’s motor vehicle regulator, who gave its Dutch creators permission to register the machine as a car.

Eighty orders have already been placed for the flying car and its makers, a start-up, hope it could be sold as an aircraft by 2022, reported The Times.

Future owners will have to get a basic pilot’s licence to take control of the 110mph vehicle, with a range of hundreds of miles. It will have a top ground speed of 100mph. 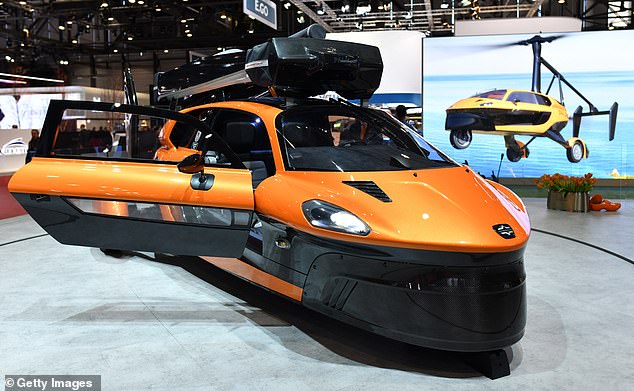 The PAL-V Liberty has been cleared for lift off by Europe’s motor vehicle regulator, who gave its Dutch creators permission to register the machine as a car. Pictured, in 2019

The flying car seats two people has 230hp and a four-cylinder engine.

It can convert from a three-wheeled car to a gyrocopter in just 10 minutes, going from 0 to 60 mph in under eight seconds.

Maxim magazine selected PAL-V in 2017 as the most likely company to deliver a ‘real’ flying car.

Mike Stekelenburg, the chief technical officer of the company making Liberty, said: ‘We have been co-operating with the road authorities for many years to reach this milestone. The excitement in the team is huge. It was very challenging to make a “folded aircraft” pass all road admission tests.’

Porsche and Boeing are working on drone-style air taxis which could be ready for sale by 2025. 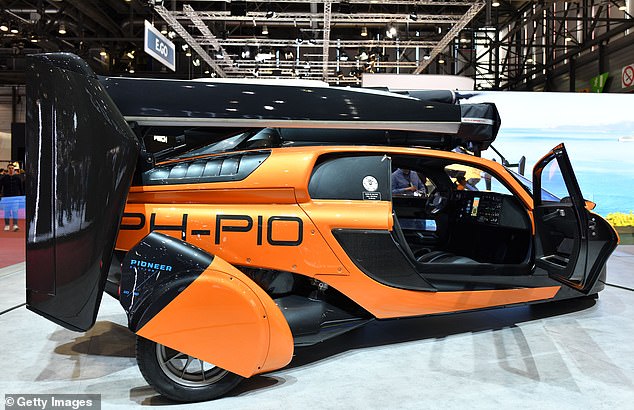 Eighty orders have already been placed for the flying car and its makers, a start-up, hope it could be sold as an aircraft by 2022, reported The Times

The Liberty is made of carbon fiber, titanium, and aluminium. It weighs 1,500 pounds, requires a 540 feet runway for take-off and just 100 feet for landing.

The craft is fitted with a similar handling system to that of a motorbike, which relies on the driver tilting the vehicle with a control stick both on the ground and in the air.

The firm has designed the car so the blades fold down and gather like a bat’s wings on the top when a button is pressed.

Last year Robert Dingemanse, CEO of PAL-V said: ‘After years of hard work, beating the technical and qualification challenges, our team succeeded in creating an innovative flying car that complies with existing safety standards, determined by regulatory bodies around the world.’ 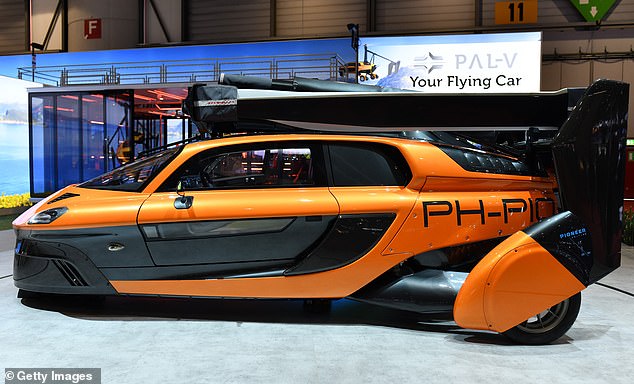 The company insists the Pal-V is not a helicopter, where blades are powered by an engine, but is a gyroplane in which the blades rotate thanks to airflow

‘While other flying car manufacturers’ concepts require modified regulations and in many cases not yet existing technologies, PAL-V deliberately chose to engineer, design and build a flying car with proven technologies and fully compliant with existing regulations.’

It incorporates a 2005 breakthrough, when Dutch company Carver invented a tilting system for three-wheelers, to counter Pal-V’s high center of gravity and make it roadworthy.

The company insists the Pal-V is not a helicopter, where blades are powered by an engine, but is a gyroplane in which the blades rotate thanks to airflow.

Even if both engines cut out, the blades will still turn. 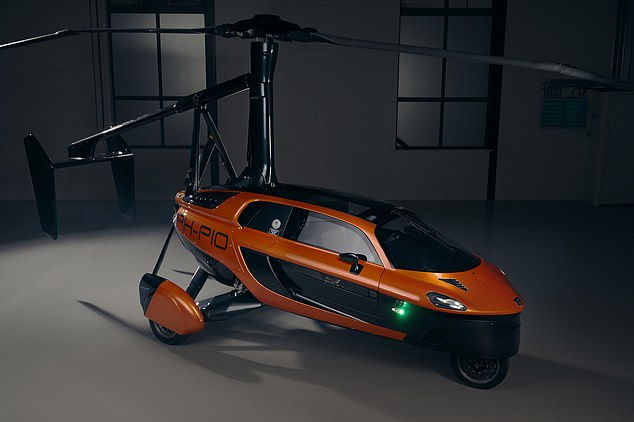 Called Pioneer Personal Air Landing Vehicle, or PAL-V, this flying vehicle is equipped with retractable overhead and rear propellers and can cruise at an altitude as high as 12,500 feet

‘The rotor is not powered, so it’s actually a parachute which is always available,’ Mr Dingemanse told AP.

Different versions of a flying car are being developed in the Czech Republic, Slovakia, Japan, China and the United States.

The lucky owner will need both a driving licence and a pilot’s licence.

But with the keys in hand, the owner will be able to drive to an airfield for the short take-off and, after landing elsewhere, drive to the destination in a door-to-door experience.

Once built, the vehicle will have to complete at least 150 flying hours, and undergo extensive tests to receive its certification from the Cologne-based European Aviation Safety Agency (EASA). 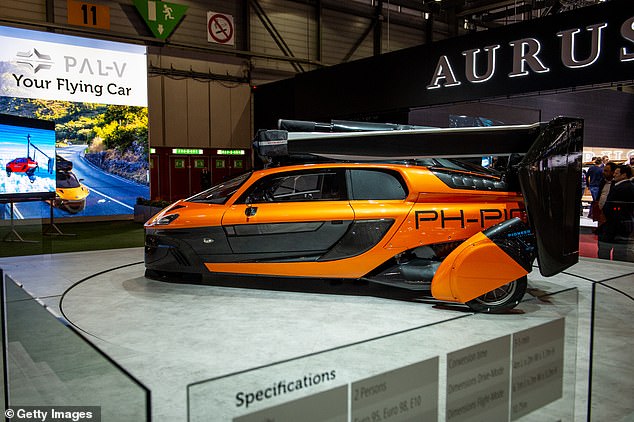 The two-seater vehicle converts from a three-wheeled car to a gyrocopter in just 10 minutes, and can go from 0 to 60 mph in under eight seconds. (Pictured is the vehicle at the 89th Geneva International Motor Show in Geneva, Switzerland in March 2019)

Once finalized, this will allow them to certify under FAR 27 regulations in America.

Speaking to AFP last year, chief marketing officer Markus Hess said: ‘This kind of dream has been around for 100 years now.

‘When the first airplane was invented people already thought “How can I make that driveable on the road?”‘

END_OF_DOCUMENT_TOKEN_TO_BE_REPLACED

END_OF_DOCUMENT_TOKEN_TO_BE_REPLACED
Recent Posts
We and our partners use cookies on this site to improve our service, perform analytics, personalize advertising, measure advertising performance, and remember website preferences.Ok