A two-year-old girl has been survived unhurt after getting her head trapped between the bars of a window grille five storeys up while being left at home alone in China.

Heart-stopping footage shows the toddler helplessly kicking her legs in the air while dangling down by the neck at nearly 50 feet above the ground.

A heroic neighbour rushed to the child’s rescue after climbing up the exterior wall with his bare hands along a gas pipe. 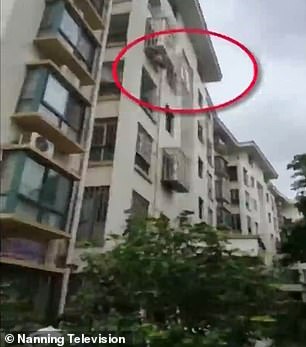 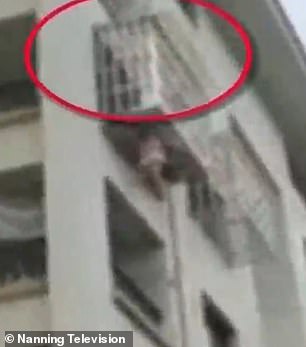 The man, a retired soldier, supported the child with one hand for around 30 minutes until rescuers were able to smash open the front door of her home to lift her in from inside.

The toddler was said to be unhurt from the incident which took place on Sunday morning in Nanning, Guangxi province of southern China.

The little girl’s mother left the toddler at home by herself so she could take her son to a doctor appointment.

The woman told the local media: ‘She was asleep. I thought I’d be back really quickly. I didn’t think she would climb this far.’

The young child was spotted by other residents after she fell out of the flat by accident and was trapped by the neck between the window grille.

A clip released by Nanning Television shows the little girl desperately swinging her legs while onlookers gasp in horror. 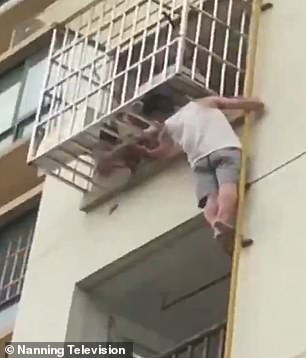 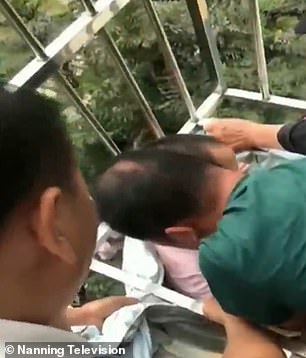 A heroic onlooker, Mr Xu (pictured left), rushed to the toddler’s rescue as he reached to the youngster through climbing onto a gas pipe with bare hands and pushed her back in 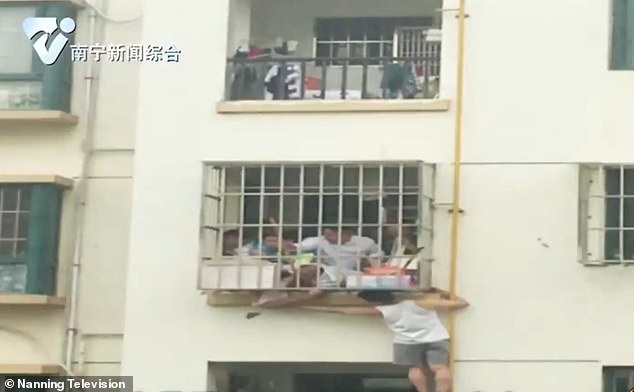 The saviour, Xu Hongwei, was alerted about the incident by his son who saw the trapped toddler while playing in the neighbourhood. He is pictured helping rescuing the little girl

The saviour, Xu Hongwei, was alerted about the incident by his son who saw the trapped toddler while playing in the neighbourhood.

Mr Xu who lives in the building opposite to the little girl’s home rushed to the child’s rescue.

The heroic neighbour quickly reached to the fifth-storey window by climbing onto a gas pipe with bare hands and feet while local community officers tried to break into the flat.

He is seen in the footage holding the girl’s legs while the officers who broke into the home trying to lift the toddler.

The man kept clinging onto the tube without any protection for nearly half an hour until the child was successfully rescued.

Media reports did not specify the height of the building but a typical five-storey flat is 15 metres (49.2 feet) high. 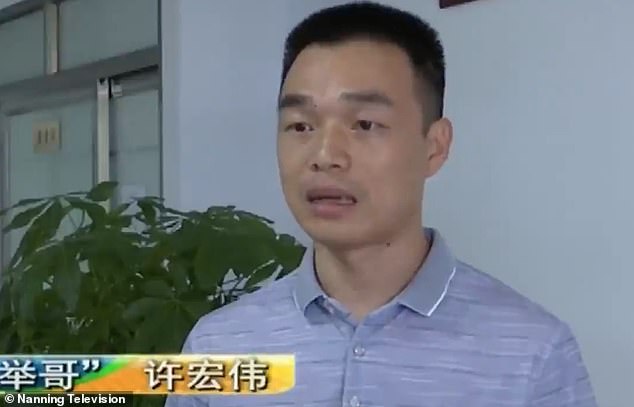 Mr Xu, a retired soldier who lives in the building opposite to the little girl’s home, rushed to the child’s rescue. He is pictured being interviewed by the local media after his heroic act

END_OF_DOCUMENT_TOKEN_TO_BE_REPLACED

END_OF_DOCUMENT_TOKEN_TO_BE_REPLACED
Recent Posts
We and our partners use cookies on this site to improve our service, perform analytics, personalize advertising, measure advertising performance, and remember website preferences.Ok