Tornado, severe weather outbreak most 'prolonged stretch' in 8 years — and here's why

Many people have risked their lives to capture video of tornadoes. Here is a look at some of the most incredible footage captured of tornadoes over the past few years.

A two-week onslaught of volatile weather has wrought death and destruction from the Southern Plains to the Northeast, bombarding the country's interior with disaster after disaster all because of a stalled weather pattern.

The National Oceanic and Atmospheric Administration's Storm Prediction Center has received more than 500 reports of tornadoes in the last 30 days. The 442 twisters reported in May — which is historically tornado season's busiest month – is still nearly double the 3-year average of 226 cyclones.

"The threat is ongoing in the same areas we have seen over the past couple of days," Fox News Senior Meteorologist Janice Dean said Wednesday on "FOX & friends." 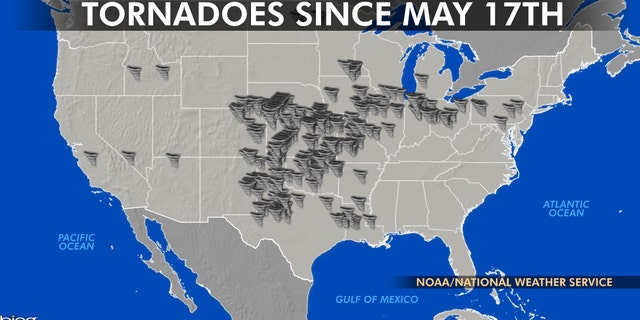 The location of tornadoes since May 17th, when the latest outbreak of severe weather began.

“This is the 13th day of severe weather outbreaks. From Texas through Mid-Atlantic area, you know these are heavy populated neighborhoods it just takes one tornado to cause incredible amounts of damage," Dean added.

Patrick Marsh, the warning coordination meteorologist at the SPC, tweeted the current period is the first 30-day stretch with at least 500 tornado reports since 2011.

"Only four periods in the official database ever exceed 500 *observed* tornadoes in 30 days: 2003, 2004, 2008, and 2011," Marsh said.  The number of actual twisters is likely lower than the reported figure, however, because some reports undoubtedly come from different witnesses spotting the same cyclone.

Recovery begins in Ohio after tornadoes tear through state

Fox News correspondent Ellison Barber talks to a storm victim on the ground in Trotwood, Ohio.

The overall spike in tornadoes and the sustained severe weather threat is due to a blocked weather pattern over the country, according to Dean.

A cold trough over the Rockies and a high-pressure ridge over the Southeast sending forced warm, moist air into the central U.S. is setting up a battleground where the two air masses collide — forming severe thunderstorms that can themselves spawn tornadoes. The jet stream is "the highway of these storms rolling over the same areas," according to Dean.

Roy W. Spencer, a weather and climate researcher at the University of Alabama, said that "perfect conditions" to produce tornadoes this year have developed as "winter has refused to lose its grip on the western United States." 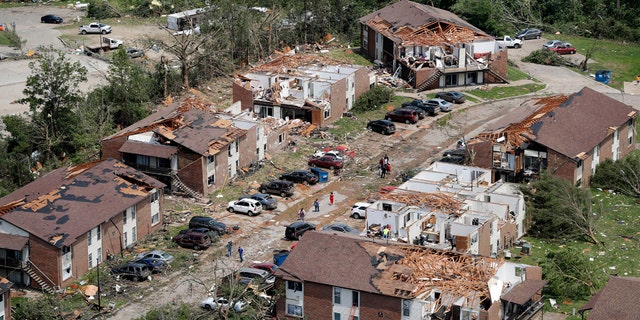 "Every year, springtime thunderstorms in Central and Southeast U.S. have plenty of warm, moist air to draw on from the Gulf of Mexico," Spencer wrote in a Fox News op-ed. "What they generally don’t have is a persistent cold air mass producing strong wind shear at the boundary between a warm and cold air mass."

The U.S. has experienced a lull in the number of tornadoes since 2012, with tornado counts tracking at or below average each year. Spencer said Tuesday that slow warming in the U.S. has been accompanied by fewer of these cold springtime air masses over the West, and thus a decrease in strong to violent tornadoes.

"But this year, snows have extended into late May from Northern Michigan through Colorado to the Sierra of California," he wrote Tuesday. "As a result of this persistent cold air mass, as of May 27, we are well above normal for total U.S. tornadoes."

May is typically the month with the highest incidence of tornadoes, usually in the Plains and Midwestern states collectively known as Tornado Alley, where most of this year's twisters have hit. Most of the confirmed tornadoes were rated as less-intense EF0, EF1 and EF2s on the Enhanced Fujita Scale. 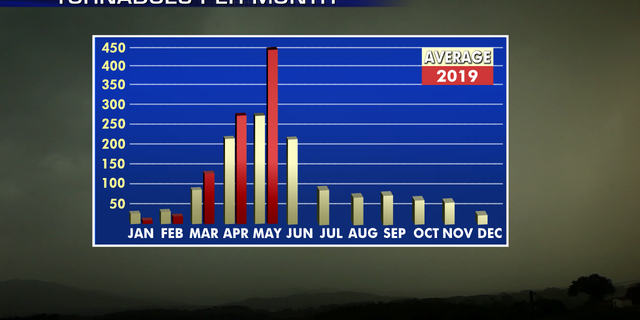 There have been nearly 450 reports of tornadoes in May, nearly double the average.
(Fox News)

But 23 were classified as EF3 tornadoes, with wind speeds of 136-165 mph. The strongest confirmed tornado this year was the EF4 tornado that killed 23 people in Alabama in March.

So far this year, 38 people have died in 10 tornadoes in the United States, including a combined seven within the last week in Iowa, Missouri, Oklahoma and Ohio.

Storm reports on Tuesday stretched from the Kansas City metro area all the way to the Northeast.
(Fox News)

The latest stretch of severe weather is finally expected to break, after the threat for strong tornadoes on Wednesday from northern Texas through southeastern Oklahoma into Arkansas and southern Missouri, including Dallas and Fort Smith.

"One more day of this prolonged stretch of severe weather, then a shift in both the overall weather pattern and a break from the widespread severe storms," Dean said. 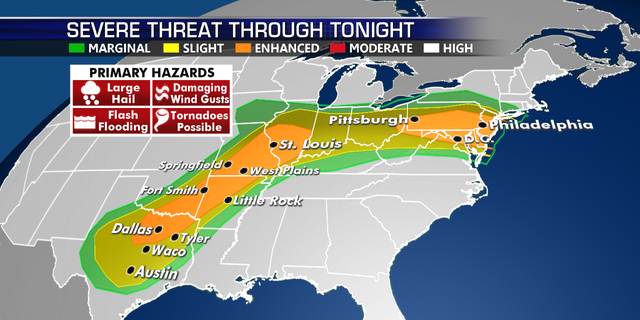 The threat for severe weather continues across the country on Wednesday.
(Fox News)

There is also a chance of isolated tornadoes across Pennsylvania, New Jersey, Maryland, and Delaware, including Philadelphia and Washington, D.C., according to Dean.

"We're going to see a break in the pattern heading into tomorrow and Friday, but flooding concerns will remain a huge issue as we head into the next couple of weeks, next couple of months as all of this water has to move downstream," Dean said Wednesday.