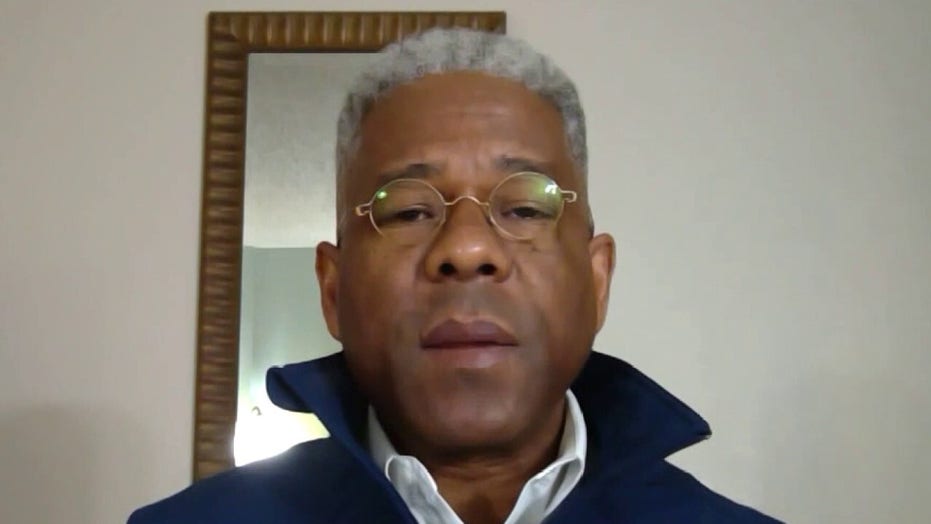 The ruby red state ‘is not ready for them to take,’ Republican Party of Texas Chairman Allen West tells ‘Fox &amp; Friends’&nbsp;

Supporters of President Trump riding in trucks surrounded a Joe Biden campaign bus on a Texas highway Friday, prompting alarmed staffers to call 911 and cancel at least two stops scheduled later that day, according to reports.

People in several trucks formed a so-called “Trump Train,” waving flags and honking horns while surrounding the bus as it traveled down Interstate 35, bound from San Antonio to Austin, videos show.

Biden campaign officials said afterward that they feared the Trump devotees might run their bus off the road.

The FBI is investigating the incident, according to the Texas Tribune.

It was unclear if anyone broke the law, however. The FBI office in San Antonio said in an email to Fox News that the agency will release a statement by 1 p.m. local time Sunday.

DEMOCRATS CLAIM CHANCE OF 2020 TEXAS VICTORY, BUT THE STATE 'IS NOT READY FOR THEM TO TAKE:' WEST

A separate video posted to social media appeared to show at least one minor traffic collision when two vehicles made contact on the highway near San Marcos but did not stop. The Biden campaign later canceled at least stops in San Marcos and Austin.

Texas has become a closely contested battleground state. Neither Biden or his running mate, Kamala Harris, were aboard the bus, which was not part of Harris’ separate visit to Texas that day.

Naomi Narvaiz of the San Marcos Area Republican Texans Group, tweeted Sunday that the Biden campaign canceled their events "because they saw minimal support for their democrat candidates!"

“It was an embarrassment to them to see so much more support for @POTUS @realDonaldTrump! They then resort to be victims! #Trump2020,” she wrote.

The Republican Party of Texas issued a statement targeting the reporter who covered the story for the Texas Tribune, saying she was trying to portray conservatives as "violent radicals."

The Biden campaign tour stopped in Laredo earlier Friday, prompting one social media user to tweet a message calling on people to “escort” the Biden bus through San Antonio. The tweet included the hashtags #TrumpTrainTexas and #FollowTheBus.

“Trolling is FUN,” the tweet said, adding, “We are on the bridges & will intercept at Walters/I35!!”

As the bus traveled through multiple jurisdictions, local police departments in New Braunfels, Kyle and San Marcos said they received calls about the Trump caravan but it was unclear if any criminal activity occurred.

Democrats painted the Trump supporters as aggressors trying to stop the bus, but Republicans said the drivers were merely following the bus to show support for the president.

“Rather than engage in productive conversation about the drastically different visions that Joe Biden and Donald Trump have for our country, Trump supporters in Texas instead decided to put our staff, surrogates, supporters, and others in harm’s way,” Tariq Thowfeek, Biden's Texas communications director, said in a statement.

Narvaiz tweeted a video of the caravan of Trump supporters following the bus Friday and said: “We sent the @JoeBiden @KamalaHarris bus out of Hays! Your kind aren’t welcome here! This is #TrumpCountry.”

“They ran into a person's car, yelling curse words and threats,” she said.

Hays County Sheriff Gary Cutler, a Republican running for re-election, told the Tribune that the Biden campaign did not notify his office that the bus would be passing through the area Friday.

The Tribune reported that in addition to campaign staffers, Texas congressional candidate and former state Sen. Wendy Davis was on the bus.

END_OF_DOCUMENT_TOKEN_TO_BE_REPLACED

END_OF_DOCUMENT_TOKEN_TO_BE_REPLACED
Recent Posts
We and our partners use cookies on this site to improve our service, perform analytics, personalize advertising, measure advertising performance, and remember website preferences.Ok