The case in San Diego County could have implications for restaurants too, many of which have been forced to close or scale back operations, the San Diego Union-Tribune reported.

Chad Cline, co-owner of the Waterfront Bar & Grill and other establishments, said he was hopeful he could soon reopen his businesses, but was unclear whether the judge's ruling applied to them.

"It kind of says that restaurants can reopen," Cline told the newspaper, "but the caveat there may be that someone has to be stripping, which seems so wild to me. If that’s what it takes for us to reopen our businesses — taking off our clothes — I’ll do it."

Newsom’s order had called for strip clubs to be among businesses to close, according to The Associated Press.

In his preliminary injunction, San Diego Superior Court Judge Joel Wohlfeil said his ruling applies to "San Diego County businesses with restaurant services," such as the strip clubs, and it exempts them from shutdowns and "any related orders" that prohibit live adult entertainment and surpass protocols "that are no greater than essential" for controlling the spread of the virus. 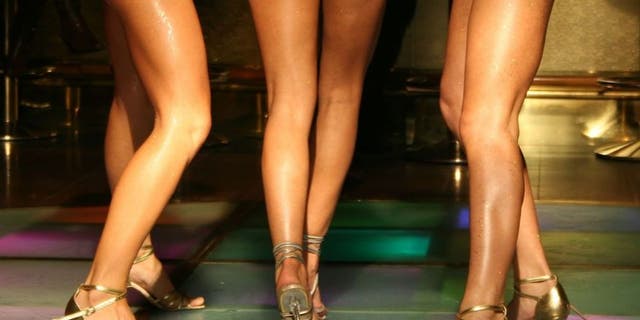 Strippers and strip club owners in San Diego are calling on city officials to lower their annual permit fees, claiming they are unjustified and much higher than in other cities.
(iStock)

The judge noted that two San Diego clubs – Pacers International Showgirls and Cheetah’s Gentlemen’s Club – had enacted their own safety measures, calling for strippers to stay 15 feet away from customers, letting only one stripper onto a stage at a time, and having the dancers and other employees wear masks.

San Diego County supervisors said last week that they would appeal any extension of an exemption for strip clubs, which the judge had granted last month.

County officials also said they were unclear about the meaning of the judge's Wednesday ruling but would halt enforcing mitigation rules against restaurants as well as the strip clubs, the Union-Tribune reported.

Newsom’s office said its legal team was "reviewing options to determine next steps."

Last week, California Attorney General Xavier Becerra had sent cease-and-desist orders to the two San Diego clubs, warning he would pursue legal action against them if they didn’t comply with Newsom’s bans on indoor and outdoor dining and large social gatherings.

Patti Li, an attorney for the state, stressed that Wohlfeil’s ruling was in effect only temporarily, and disputed the clubs’ contention that their free speech rights – as exhibited through adult entertainment – were being targeted, according to The Associated Press.

"There is no targeting of expression here," the attorney said.

END_OF_DOCUMENT_TOKEN_TO_BE_REPLACED

END_OF_DOCUMENT_TOKEN_TO_BE_REPLACED
Recent Posts
We and our partners use cookies on this site to improve our service, perform analytics, personalize advertising, measure advertising performance, and remember website preferences.Ok