Follow all the latest strike news, pictures and updates from around the UK as ambulance workers begin their largest walkout in 30 years.

As mentioned earlier, the vast majority of ambulance services in England and Wales are impacted by strike action today.

Life-threatening emergencies will still be catered for, but delays and queues at A&E departments are expected.

The areas affected are pictured below. 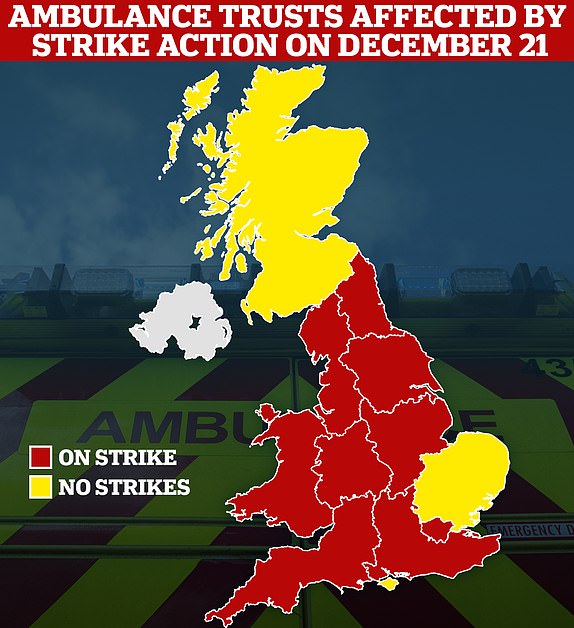 Sharon Graham, general secretary of the Unite union, slammed the government’s response to strike action as she visited an ambulance service hub in Longford, Coventry, to meet with paramedics on the picket line.

Urging the Government to meet the strikers’ demands, the union leader said: ‘What they need to do is to get this crisis over – get back around the negotiating table so we can do a deal, these people can go back to work, and we can begin to look at what is happening in our NHS.

‘People are leaving the NHS to go and work in Tesco and Amazon. There is something drastically wrong with that.’

Ms Graham added: ‘This Government can make different choices. They can say that “actually we choose to invest in the people in the NHS”.

‘But they are looking at different choices, because they don’t want this to end. I think they want this crisis to be there.’ 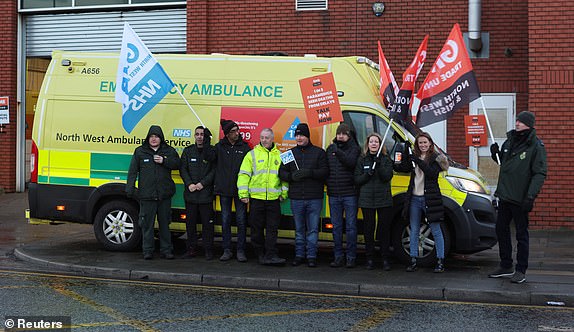 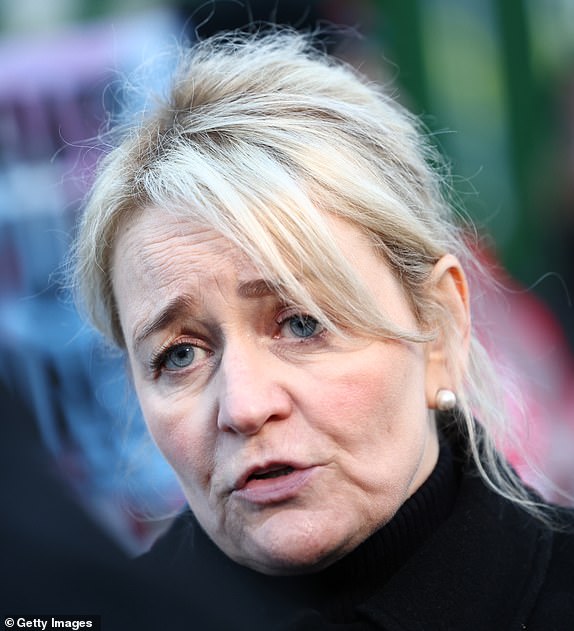 Only trusts in the East of England and the Isle of Wight will remain unaffected. 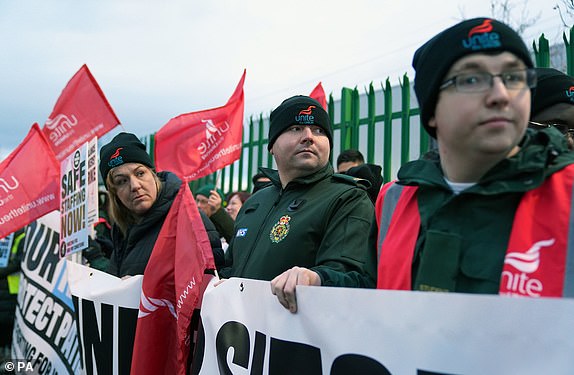 Professor Sir Stephen Powis, medical director of NHS England, said today ambulance strikes will create a ‘very difficult day’ for the health service, but that heart attacks and strokes would be covered.

He told BBC Radio 4’s Today programme: ‘Today is obviously going to be a very difficult day with the health service.

‘But we’ve been working very closely with the unions to ensure that emergency services for life-threatening conditions are maintained, and that will include stroke and heart attacks.

‘There are increased clinicians in call centres to ensure that the right response goes out to the right incident.’

At ambulance stations across England today lines of vehicles remained silent and unused as workers walked out on Wednesday morning. 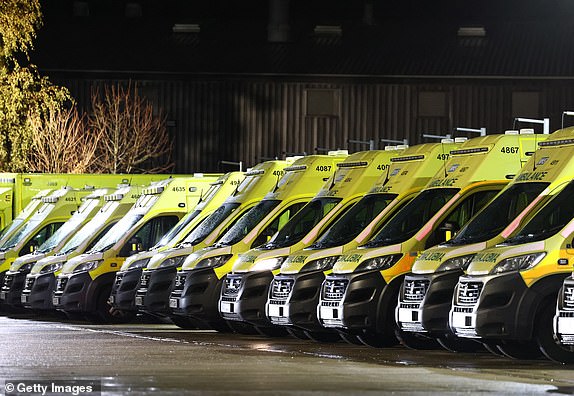 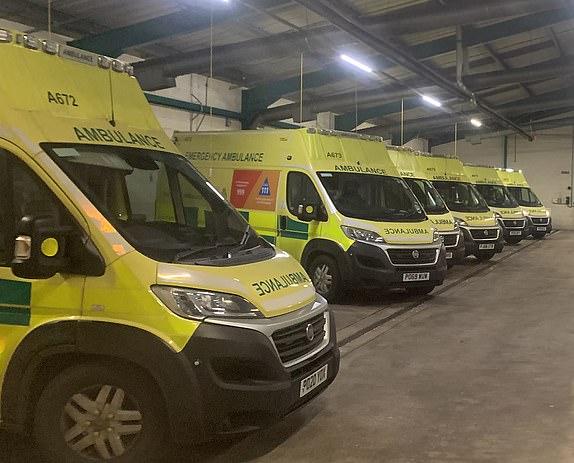 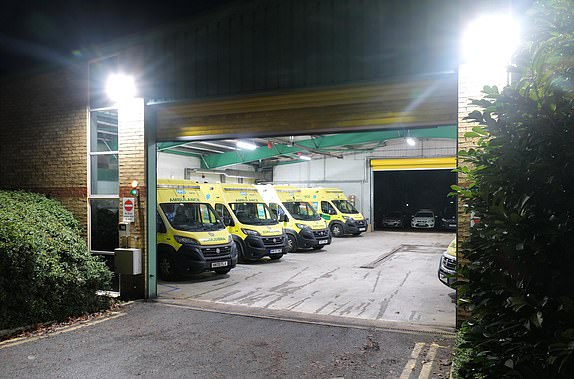 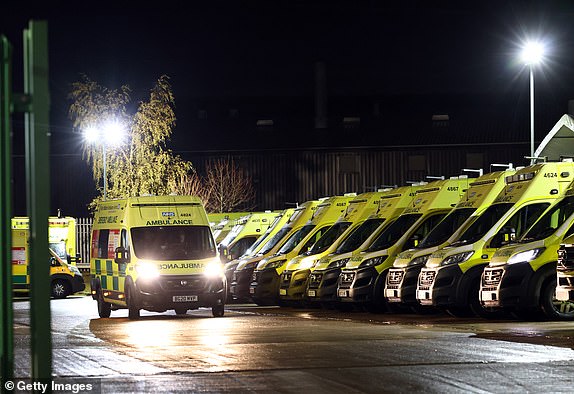 The Health Secretary Steve Barclay has come under fire this morning after he blamed ambulance workers for putting patients at risk.

Writing in today’s Telegraph, Mr Barclay said: ‘We now know that the NHS contingency plans will not cover all 999 calls. Ambulance unions have made a conscious choice to inflict harm on patients.’

But Unison general secretary Christina McAnea hit back by saying it would ‘absolutely be the Government’s’ fault if people die during the action.

Branding the Government ‘totally irresponsible’, she told TalkTV: ‘The only time they called me in for a meeting was today, the day before the strike, and it’s completely irresponsible of them to refuse to open any kind of discussions or negotiations with us.’

Today, Mr Barclay also attacked unions for failing to agree a nationwide deal to cover all category one calls, like cardiac arrests.

But Ms McAnea said she was ‘utterly shocked’ at his comments. She added: ‘He has never specifically asked Unison for a national contingency agreement.’

The GMB union’s South West and Wales representative has said in one Welsh Ambulance Service depot all striking members have had to be called away from the picket line on emergency calls.

Nathan Holman tweeted a video of himself alone at Pentwyn service station in Cardiff just before 8am on Wednesday – less than an hour into the day-long walkout.

‘Unfortunately, all the members have had to go because, as you can see behind me, there’s only one vehicle left, they’ve all jumped on a vehicle and responded to emergency calls.

‘So, just shows we’re still responding to the public.’

Around 1,500 ambulance staff in Wales are expected to take part in Wednesday’s industrial action.

Crews are still required to respond to critical 999 calls, but despite this the service is expected to be ‘significantly impacted’, according to the Welsh Government.

EVERYTHING you need to know about today’s ambulance strike

But which staff are taking to picket lines? How many workers are striking? And will heart attack patients still be taken to hospital by 999 crews?

Here, MailOnline answers all your questions on today’s strikes.

The Government says most ambulance staff have received a pay rise of at least four per cent, taking their average basic pay to £34,300.

But unions say the basic salary for a call handler is no more than £23,000 and the government website says the starting wage for a paramedic is £25,655.

The unions voted to strike in a dispute over the Government’s 4 per cent pay award.

Unite says it wants a pay rise ‘in line with the cost of living’.

GMB wants a ‘catch-up settlement’ for its staff that restores ‘a decade of lost earnings and a retention package that properly rewards existing’.

Meanwhile, Unison wants an above-inflation pay rise. That would, at this moment in time, amount to at least 11 per cent. 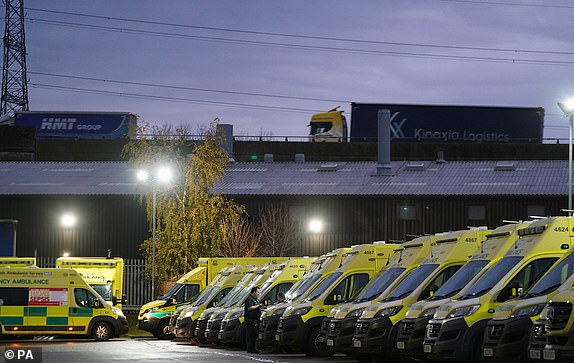 Good morning, and welcome to today’s live coverage as paramedics join their NHS colleagues in their largest walkout in 30 years.

Follow along for all the latest news, updates and pictures from throughout the day.