Low pressure is forecast to sweep across the UK over the next couple of weeks from a northerly direction. The weather system is expected to bring cold air and wintry conditions that could last for a two week period from Christmas Day on Friday, December 25, until Thursday, January 7, according to maps from WXCHARTS. Snow is predicted to batter Scotland on January 7, with up to 35 inches (89cm) to settle in the east.

The maps show four inches of snowfall hitting the region on Friday and gradually deepening over the next two weeks, with 66cm on New Years Day on Friday, January 1.

North western parts of England are also forecast to see around three inches of snow on January 7.

Temperatures are also expected to plunge as low as -7C in Scotland on New Years Eve, on Thursday 31.

The bitterly cold sub-zero air is likely to sweep down the UK next week, with Liverpool seeing -3C on New Year’s Eve and most of the south including London and Southampton averaging 0C. 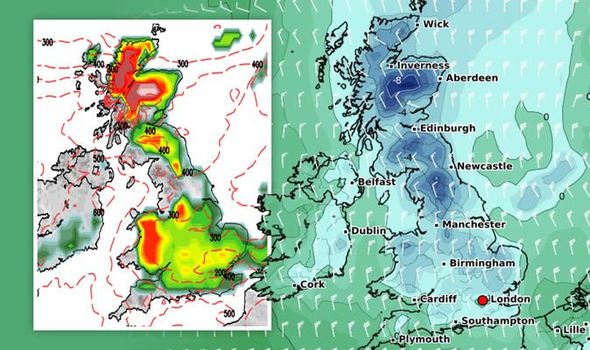 Temperatures are likely to stay in single figures by January 7, with Yorkshire regions including Leeds and York seeing 0C.

Nick Finnis at Netweather warned cold air from Iceland is forecast to hit the UK as early as Boxing Day.

He said: “Boxing Day turning wet and windy from the northwest, as fairly deep area of low pressure moves southeast from Iceland towards the North Sea, hill snow developing across Scotland as colder air filters in here from the north, with some significant snowfall possible for the Highlands.

“Sunday will likely see low pressure centred over the North Sea, bringing sunshine and showers – which will be wintry in nature, with snow over hills, showers mostly towards coasts but some getting inland. 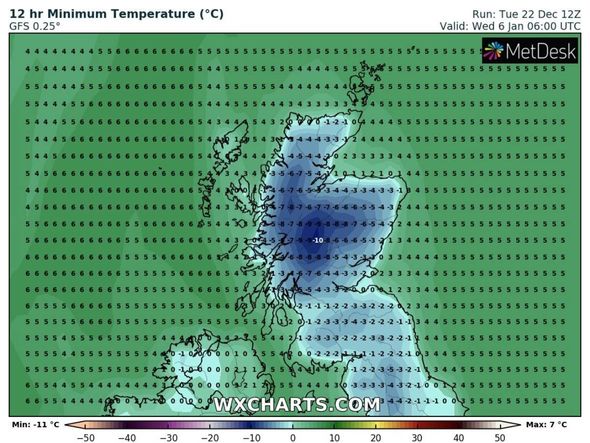 “Staying cold into next week, with further wintry showers or spells or rain, sleet and snow.”

The BBC’s long-range forecast from Monday, December 28 to Sunday, January 3, added sleet or snow showers are likely as cold air continues to push in.

The forecast said: “It looks likely that milder air will move in around December 28 and 29 but this will be accompanied by periods of rain and increased winds as a frontal systems pass across the UK.

“Some wintry precipitation will be possible over the higher ground in Scotland but elsewhere mild enough even to avoid frost in most places. 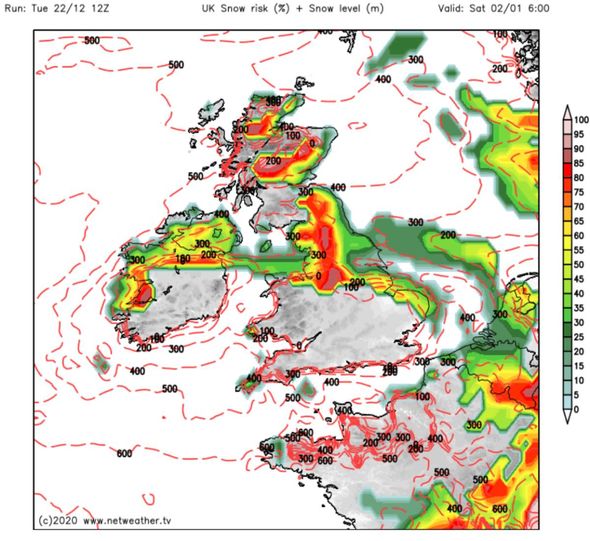 “These lows should shift away southeast and eastwards, inducing colder flows from a northwesterly direction on the 30th and into New Year’s Eve.

“This is also partly due to high-pressure west of the UK, and this will maintain these chilly flows from the northwest through the New Year into the first week of January.”

The forecast added: “However, no deep cold is expected, with temperatures just a little below normal.

“It should become drier for most areas through this period but a few showers will be possible, chiefly for northern and western areas. 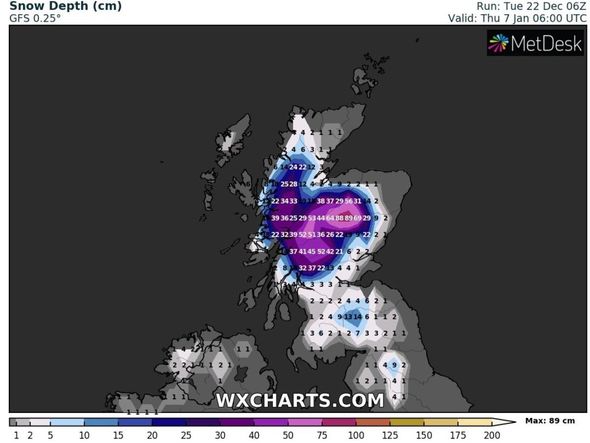 “Any showers could be wintry over higher ground in Wales, Northern Ireland and Northern Ireland, and perhaps at lower levels in Scotland from time to time. There looks to be little chance of any strong winds.

“Although this is the most likely development, models diverge and there could be threats of stronger cold with winds from the north or northeast, which would bring sleet or snow showers to Scotland and eastern England were this to develop.”

The Met Office also warned of cold conditions lingering until the start of January.

The forecast between Tuesday 5 and Tuesday 19 said: “A continuation of rather cold conditions look most likely to persist through the early part of January. 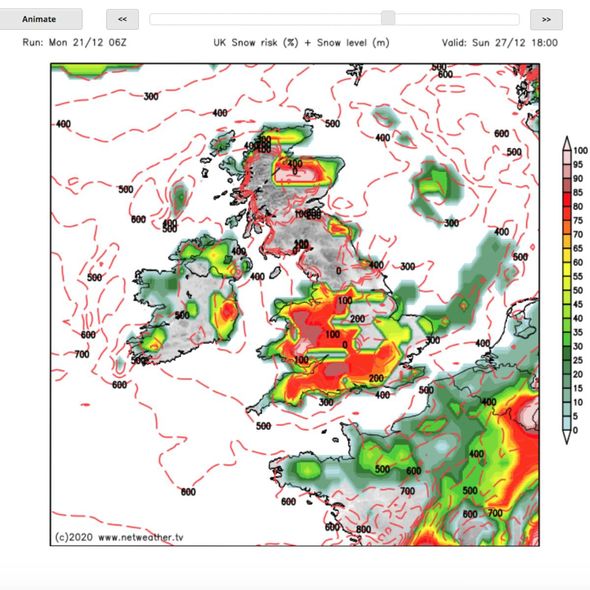 “A decent amount of fine and dry weather is likely to persist too with western areas likely drier than average.

“Eastern areas have the greatest chance of seeing wintry showers at times. By mid-January confidence in the prevailing weather patterns becomes much more uncertain.

“There are tentative signs that more unsettled conditions will develop widely again with temperatures returning to around average.”

END_OF_DOCUMENT_TOKEN_TO_BE_REPLACED

END_OF_DOCUMENT_TOKEN_TO_BE_REPLACED
Recent Posts
We and our partners use cookies on this site to improve our service, perform analytics, personalize advertising, measure advertising performance, and remember website preferences.Ok