London: The UK's Home Secretary Sajid Javid has certified a formal request for Julian Assange's extradition to the US on espionage and hacking charges.

The request will now be reviewed by British courts, in a process expected to take months if not years. 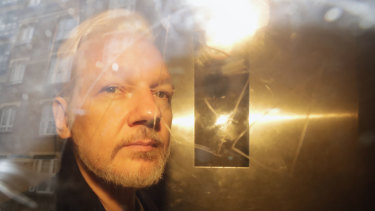 “It is a decision ultimately for the courts, but there is a very important part of it for the home secretary and I want to see justice done at all times and we’ve got a legitimate extradition request, so I’ve signed it, but the final decision is now with the courts,” he said.

The Home Secretary slightly misstated the procedure, as he has merely certified an extradition request rather than the final extradition order, which will follow a contest expected to be waged between Assange's and the US government's lawyers over whether extradition would be legal.

A Home Office spokesman confirmed to The Sydney Morning Herald and The Age that this was the case.

According to the UK Home Office website the extradition process to territories such as the US begins with an extradition request to the Secretary of State, and his decision whether to certify that request.

Such certification happens if the request meets basic criteria: if the extradition is stated to be for the purpose of prosecuting or punishing an eligible offence, and if the request is made by an appropriate authority.

Where these basic criteria are fulfilled the Secretary of State certifies the request and sends it to the courts.

After an extradition hearing in the courts – followed by (probable) appeals –  the minister will make the final decision whether to order extradition.

In the courts Assange's lawyers are expected to argue Assange's extradition should not take place because he would not face a fair trial in the US, and because the charges are for "political" crimes.

If the courts end up approving extradition – after months if not years of legal battle – the Home Secretary will consider whether the extradition meets some final criteria: that Assange will not face the death penalty (unless the Secretary of State gets adequate written assurance that the death penalty will not be imposed or, if imposed, will not be carried out), and that he will be dealt with in the US only for the offences for which he has been extradited (except in certain limited circumstances).

Assange is due to appear by video link from Belmarsh Prison at an extradition hearing on Friday, at which the US is expected to provide more details of their charges against him.