The Met Office has forecasted a wet weekend but slightly warmer than the last few days. Temperatures will remain around 15 to 16 degrees Celsius with heavy showers beginning in the west on Saturday and moving across the country to the east by Sunday. Tomorrow will prove breezier for the UK with isobars indicating the country is still not particularly warm for this time of year.

Met Office meteorologist Steven Keates began by saying: “The good news for this weekend is that after a particularly miserable few days for some of us the weekend weather does promise something a little bit better.

“It isn’t going to be completely dry by any means but most of us should see at least see some sunshine.

“There will be some showers around and on Sunday, in particular, quite a brisk breeze swell.

“First thing Saturday morning, we can see the rain pushing into parts of western Scotland, eastern Scotland not doing too badly, a few showers yes.

“Most of the overnight rain should have cleared away from Northern Ireland but it will be quite a soggy start to the day across northwest England parts of the Midlands and parts of the west country too seeing some outbreak of rains at this stage. 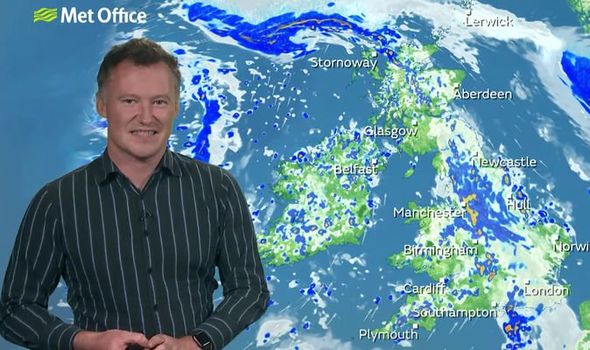 “As we move on through Saturday for many western areas they will see a fair amount of dry bright weather, a few showers breaking out yes.

“Ahead of the rain band across eastern England, we could again see some fairly sharp showers breaking out.

“But in between, we have got this cloudier zone of weather so it is fairly likely we will see outbreaks of rain and underneath all of that, it is going to be quite cool as well.

The Meteorologist went on to explain that during Saturday temperatures will be around 15 to 16 degrees.

He added that in the sunshine it could feel warmer than it has done over the last few days with eastern England potentially seeing up to 20 degrees.

The dry and sunny areas in the west won’t reach temperatures as high but it will still feel warm.

He added: “If you have plans for Saturday evening I think there will be some rain to watch out for so it may be worth taking an umbrella.

“But the majority of the showers should become more confined to eastern areas as we move on through the evening, many western areas seeing lengthier drier clearer spells.

“Yes, a few showers but overall a drier looking picture as we move into the early hours of Sunday those temperatures will be sliding away nicely.”