A United Airlines crew member who arrived in Sydney with COVID-like symptoms on Monday was released from hotel quarantine within 24 hours despite a request from health authorities for more time to perform further testing.

The female crew member landed in Sydney on Monday morning from Los Angeles with symptoms and subsequently tested negative to COVID-19. 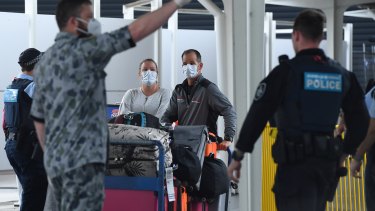 Passengers arrive at Sydney International Airport from Los Angeles off a United Airlines flight that arrived just after 6am on Thursday.Credit:Kate Geraghty

However, a government source with knowledge of the events said the woman was released to fly home to the US after lobbying by an airline executive, despite NSW Health quarantine teams wanting to retain her for a second test.

A United Airlines spokesman said the flight attendant travelled back to the US as a passenger because she was “medically cleared by MedAire and the NSW Health Department” after a voluntary test returned a negative result.

Premier Gladys Berejiklian on Friday announced crews would be required to isolate in one of two hotels supervised by police and NSW Health from next Tuesday, after the northern beaches cluster grew to 28 cases.

There has been no suggestion the United Airlines crew member is linked to the cluster.

The new policy is a major shift from the existing protocol that allows air crew to stay at 25 or 26 different hotels of an airline’s choosing that are not subject to supervision. Crews are only required to isolate until their next flight.

It is not clear if the new requirement to isolate in a police-run hotel will apply to Qantas crew members who live in Australia, who have been allowed to self-isolate at home after international flights under an exemption. 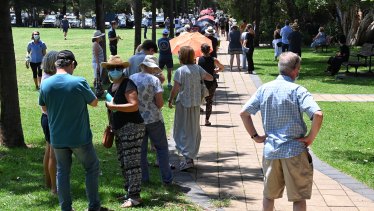 People line up to get a COVID-19 test at a pop-up testing site in Avalon on Thursday.Credit:Nick Moir

Flight Attendants Association of Australia federal secretary Teri O’Toole said many members would choose not to operate Qantas’ international repatriation flights if they had to quarantine in a hotel rather than at home.

“We will support the government’s position, however it may make a huge difference to what crew is available,” she said.

Ms Berejiklian said the challenge had not been the guidelines, but “disobedient” crews, like that of a LATAM Chile flight, who broke quarantine for a night out, leading to $13,000 in personal fines.

“From Tuesday, there’ll be no chance of disobedience, given the police and [NSW] Health will be ensuring that they are located at two places close to the airport,” she said. 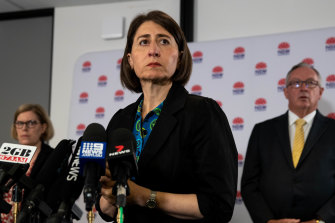 Under current rules, a crew member must provide contact details to NSW Health before leaving the airport and a written declaration that they have not been in contact with a person with COVID-19 in the past 14 days.

They must also declare that they have not had any symptoms of COVID-19 in the 72 hours before arrival and self-isolate.

A NSW Health spokesman said it does not comment on specific cases. He said crew identified as potentially having COVID-19 were requested to go to special health accommodation and "released when there is no risk of onward transmission".

Industry expert Brian Wilson said widespread flouting of rules by all airlines since the start of the pandemic had crews and pilots on high alert, describing current controls that relied on self-regulation as inadequate.

“Like in all parts of civil aviation, self-regulation doesn’t work. No airline in the world is going to put its hand up and say, our crew went out on the town,” he said.

“People working in the industry are extremely concerned, not only for their own health but because these holes in the net fundamentally threaten their livelihood.”

One source at a major airline suggested the government’s decision to take responsibility for housing crew during layovers raised concerns of “cross-contamination”.

“You’ve got airlines from low-risk countries who are now going to be housed in basically the same space as airline crew coming from COVID-19 hotspots” said the source, who requested anonymity because he did not have permission to speak publicly about the issue.

Health Minister Brad Hazzard said he had held a number of meetings with airlines about managing the 2000-3000 crew members arriving in NSW every week.

“We want them to continue flying. Freight and Aussies coming home are crucial, so we’re delicately negotiating,” he said.

There have been no COVID-19 cases among international or domestic Qantas crew since late March.

END_OF_DOCUMENT_TOKEN_TO_BE_REPLACED

Melania Trump is a ‘tough cookie’ says Piers Morgan Since President Joe Biden was inaugurated many have speculated about what the future has in store for the Trumps. Some have suggested he could leave the country, while others believe he could be preparing for a second presidential run in 2024.

END_OF_DOCUMENT_TOKEN_TO_BE_REPLACED

END_OF_DOCUMENT_TOKEN_TO_BE_REPLACED
Recent Posts
We and our partners use cookies on this site to improve our service, perform analytics, personalize advertising, measure advertising performance, and remember website preferences.Ok