Trump's narrow – but not impossible – path to victory

Atlanta, Georgia: If Donald Trump scores a second upset election victory next week, how will it happen?

Although you wouldn't know it from the US President's hectic cross-country campaign schedule, Trump's most likely pathway to 270 Electoral College votes is coming into focus as election day approaches. As happened in 2016, he needs to outperform the polls — which show Democratic challenger Joe Biden significantly ahead — and for luck to be on his side. 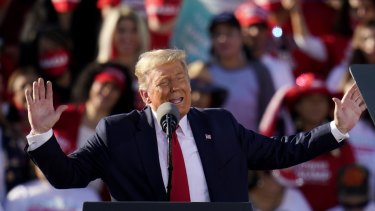 Don’t write him off: US President Donald Trump. Credit:AP

In this scenario, counting each states' allocated electoral college votes (from representatives who generally cast their ballot in accordance with the popular vote), Biden is sitting on 232 electoral votes and Trump on 231 with four states still up for grabs.

WASHINGTON: A dizzying array of U.S. Supreme Court orders and opinions over the past 10 days has left the rules governing next week's presidential election in flux.

In rapid succession, the court has allowed extra time for mail-in ballots to arrive in Pennsylvania and North Carolina, but rejected calls for a similar extension in Wisconsin. Along the way, some conservative justices have signaled they would invalidate late-arriving ballots after the election – and potentially help Republican President Donald Trump defeat Democrat Joe Biden. 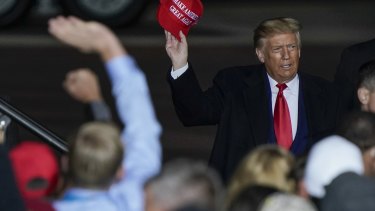 US President Donald Trump at a campaign rally in Mosinee, Wisconsin. Hackers stole $US2.3 million from the state Republican Party’s account that was being used to help re-elect him. Credit:AP

The attack was discovered less than two weeks before Election Day, as both Trump and Democratic rival Joe Biden made their final push to win Wisconsin and its 10 electoral votes.

Trump won the state by fewer than 23,000 votes in 2016 and planned his third visit in seven days on Friday.

Biden also planned to campaign in Wisconsin on Friday. Polls have consistently shown a tight race in the state, usually with Biden ahead by single digits and within the margin of error.

G'day everyone! It's Roy Ward here and I'll be leading the line once again for our US election live blog with five days left until election day.

Today sees President Donald Trump and former vice president Joe Biden both travel to the vital swing state of Florida to try and win over those remaining undecideds, there has been a big early voter turnout in Florida as in other states but both parties still think there are a decisive number of potential voters to sway.

Biden is keeping his focus on Florida for the day while Trump is scheduled to head to North Carolina in the evening as he attempts to secure that state.

As always, please leave a comment if you have something to say on this race and enjoy the coverage to come.

END_OF_DOCUMENT_TOKEN_TO_BE_REPLACED

END_OF_DOCUMENT_TOKEN_TO_BE_REPLACED
Recent Posts
We and our partners use cookies on this site to improve our service, perform analytics, personalize advertising, measure advertising performance, and remember website preferences.Ok