Washington: Nearly seven per cent of ballots in US Postal Service sorting facilities on Tuesday were not processed on time for submission to election officials, according to data the agency filed Wednesday, local time, in federal court, potentially leaving hundreds of thousands of ballots caught in the mail system during an especially tight presidential race.

The Postal Service reported the timely processing – which includes most mail-handling steps outside of pickup and delivery – of 93.3 per cent of ballots on Election Day, its best processing score in several days, but still well below the 97-percent target that postal and voting experts say the agency should hit. 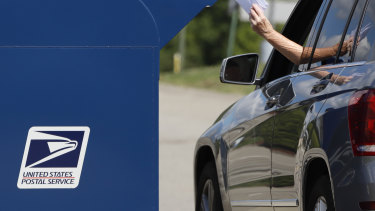 The Postal Service processed 115,630 ballots on Tuesday, a volume much lower than in recent days because of weeks of warnings about chronic mail delays. Of that volume, close to 8000 ballots were not processed on time, a small proportion but one that could factor heavily in states such as Michigan and Wisconsin, which do not accept ballots after Election Day and could be decided by a few thousand votes.

Earlier Tuesday, the judge in the case, Emmet G. Sullivan of District Court for the District of Columbia, ordered the Postal Service to sweep processing 12 facilities that cover 15 states for ballots. But the agency rebuffed that order and said it would stick to its own inspection schedule, which voting rights advocates worried was too late in the day for found ballots to make it to vote counters.

The directive came after the Postal Service disclosed that more than 300,000 ballots nationwide could not be traced. Those ballots received entry bar code scans at processing facilities, but not exit scans.

The agency said the likelihood of that many ballots being misplaced was very low; mail clerks had been ordered to sort ballots by hand in many locations and items that were pulled out for expedited delivery were not given an exit scan.

"We know yesterday that if the sweeps were doing their job, mail that was identified as ballots and were in the system should have been pulled out and delivered, and it may be that affects what we see as the scores," said Allison Zieve, an attorney representing the NAACP, which brought the lawsuit against the Postal Service with other civil and voting rights groups.

"The problem is, in part because of the timing and in part because they haven't given us all the information we asked for, it's hard to know whether the numbers we saw today – the low scores for example in Atlanta and Central Pennsylvania – it's hard to assess how big a problem that is."

Sullivan had given the mail agency until 3.30pm Tuesday to conduct the "all clear" checks to ensure that any found ballots could be delivered before polls closed. But in a filing sent to the court just before 5pm, Justice Department attorneys representing the Postal Service said the agency would not abide by the order, to better accommodate inspectors' schedules.

Attorney John Robinson, writing for the Justice Department, noted that the daily review was already scheduled to occur from 4 to 8pm on election night.

"Given the time constraints set by this Court's order, and the fact that Postal Inspectors operate on a nationwide basis, Defendants were unable to accelerate the daily review process to run from 12.30pm to 3.00pm without significantly disrupting preexisting activities on the day of the Election, something which Defendants did not understand the Court to invite or require."

The NAACP requested an emergency hearing, which Sullivan denied. But he told Justice attorneys to be "prepared to discuss the apparent lack of compliance with his order" at a previously scheduled Wednesday conference.

"This is super frustrating," Zieve said Tuesday. "If they get all the sweeps done today in time, it doesn't matter if they flouted the judge's order. They say here they will get the sweeps done between 4pm and 8pm, but 8pm is too late, and in some states 5pm is too late."

In the past 14 months, Partenheimer said, the Postal Service has processed more than 4.5 billion pieces of political and election mail, up 114 per cent from the 2016 general-election cycle.

"Ballots will continue to be accepted and processed as they are presented to us and we will deliver them to their intended destination," Partenheimer said.

Timely ballot processing scores, which indicate the proportion of ballots sorted, postmarked and transported within the agency's one-to-three-day service window, worsened in the run-up to Election Day, according to data the agency submitted to the court. In 28 states, election officials must receive ballots by the end of Election Day to be counted.

Voting and postal experts say the mail agency should be able to process 97 per cent of incoming ballots – or completed ballots sent to election officials. But data shows the Postal Service missed that mark seven out of eight days. And in the past five days, processing scores dropped, from 97.1 per cent on Oct. 28 to 89.6 per cent on Monday. (The Postal Service did not report Sunday data.)

In 17 postal districts that cover 151 electoral votes, Monday's on-time processing rate was even lower: 81.1 per cent.

Lawyers for the Postal Service cautioned that the ballot processing scores might be unreliable. The figures do not include "first mile" and "last mile" mail-handling steps that could add time to deliveries. The Postal Service has also encouraged local post offices to sort ballots themselves and make deliveries to election officials, rather than sending the items to regional processing plants.

More than 65 million Americans have voted using absentee ballots, according to the US Elections Project, and more than 27 million mail ballots remained outstanding. Experts are encouraged by high ballot return rates in swing states that could soften the impact of mail delays. In Michigan, 85.6 per cent of absentee ballots have been returned. In Wisconsin, 89.7 per cent have been returned, and in Pennsylvania, 80.9 per cent.

Even so, the Postal Service continued Tuesday to try to track down the more than 300,000 ballots it said had entered processing plants but could not be traced. The agency cautioned that number was likely high, and that clerks were hand-culling ballots at those facilities to expedite delivery. However, officials said they did not know how widespread that process was, and how many ballots could remain.

In 17 postal districts in swing states that account for 151 electoral votes, more than 81,000 ballots were untraceable. In Los Angeles, 48,120 ballots were missing, the most of any district. San Diego was next, with 42,543 unaccounted for.

"At this point," said Zieve, "we don't have any way of knowing if those ballots are of concern or if they aren't."

Sullivan has been more aggressive than judges in Pennsylvania, New York and Washington state to grant increased oversight of the mail. He has ordered the Postal Service to report daily data on ballot performance scores and to provide written explanations each day for underperforming districts.

He has scheduled daily hearings – some of which have included sworn testimony from postal executives – on the agency's struggles. On Monday, he lamented the nation's crazy-quilt of mail-in-voting rules, saying the system should be overhauled.

"When I read about the astronaut voting seamlessly from outer space, there must be a better way for Congress to address all these issues," he said.

Sullivan contrasted the chaotic mishmash of Election Day rules with the relative simplicity of the federal income-tax deadline: "Think about it. Every year everyone knows to file taxes by April 15th. It's seamless. If you don't file, there's penalties. But everyone knows – that's a given."

By contrast, state vote-by-mail deadlines present a spaghetti-like tangle for the Postal Service and voters to navigate.

"Postmarks matter, postmarks don't matter. . . . Delivery matters, delivery after a date doesn't matter. Why can't there be one set of rules?" Sullivan said, concluding, "Someone needs to be tinkering with the system to make sure it works seamlessly and better for the American voters."

END_OF_DOCUMENT_TOKEN_TO_BE_REPLACED

END_OF_DOCUMENT_TOKEN_TO_BE_REPLACED
Recent Posts
We and our partners use cookies on this site to improve our service, perform analytics, personalize advertising, measure advertising performance, and remember website preferences.Ok