Home » World News » US promises Assange, if extradited, can serve time in Australia

US promises Assange, if extradited, can serve time in Australia

Washington: If a British court permits the extradition of WikiLeaks founder Julian Assange to face criminal charges in the United States, the Biden administration has pledged that, if he is convicted, it will let him serve his sentence in his native Australia.

The US also pledged it would not hold the Wikileaks founder under the most austere conditions reserved for high-security prisoners.

The assurances were disclosed on Wednesday (Thursday AEST) as part of a British High Court ruling in London. 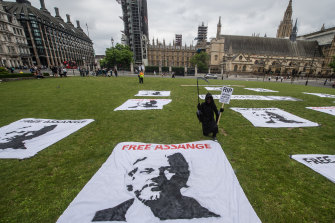 Banners are laid out as a protest picnic demanding the release of Julian Assange is held on his 50th birthday at Parliament Square in London last weekendCredit:Getty Images

The court accepted the US government’s appeal of a January ruling that had denied its extradition request for Assange — who was indicted during the Trump administration — on the grounds that American prison conditions for the highest-security inmates were inhumane.

The new ruling was not made public in its entirety. But in an email, the Crown Prosecution Service press office provided a summary showing the High Court had accepted three of five grounds for appeal submitted by the US and disclosing the promises the Biden administration had made.

A lower-court judge, Vanessa Baraitser of the Westminster Magistrates’ Court, had held in January that “the mental condition of Mr Assange is such that it would be oppressive to extradite him to the United States” and he might be driven to suicide by American prison conditions. 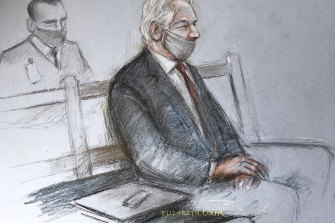 A courtroom sketch of Julian Assange appearing at the Old Bailey in London in January.Credit:AP

The summary of the decision to accept the appeal said that the United States had “provided the United Kingdom with a package of assurances which are responsive to the district judge’s specific findings in this case.”

Specifically, it said, Assange would not be subjected to measures that curtail a prisoner’s contact with the outside world and can amount to solitary confinement, and would not be imprisoned at the supermax prison in Florence, Colorado, unless he later did something “that meets the test” for imposing such harsh steps.

“The United States has also provided an assurance that the United States will consent to Mr Assange being transferred to Australia to serve any custodial sentence imposed on him,” the summary said.

On January 19, in one of its last acts, the Trump administration filed an appeal. Soon after taking office, the Biden administration pressed forward.

No hearing date for the appeal has been set. The Crown Prosecution Service and the Justice Department declined to comment.

In a statement, Stella Moris, Assange’s fiancée, urged the Biden administration to instead drop the extradition request and abandon the charges, which she portrayed as a threat to the United States’ First Amendment press freedoms. 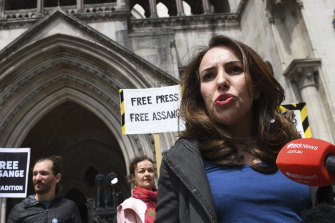 Julian Assange’s partner, Stella Moris speaks to the media outside the High Court in London on Wednesday.Credit:AP

“I am appealing directly to the Biden government to do the right thing, even at this late stage,” she said. “This case should not be dragged out for a moment longer. End this prosecution, protect free speech and let Julian come home to his family.”

The case against Assange is complex and developed over the course of three indictments secured by prosecutors during the Trump administration. It centres on his 2010 publication of diplomatic and military files leaked by Chelsea Manning, a former army intelligence analyst — not on his publication during the 2016 election of Democratic emails stolen by Russia.

Prosecutors have made two sets of accusations. One is that Assange participated in a criminal hacking conspiracy, both by offering to help Manning mask her tracks on a secure computer network and by engaging in a broader effort to encourage hackers to obtain secret material and send it to WikiLeaks. The other is that his soliciting and publishing information the government had deemed secret violated the Espionage Act.

While hacking is not a journalistic act, the second set of charges has alarmed press-freedom advocates because it could establish a precedent that such journalistic-style activities may be treated as a crime in the United States — a separate question from whether Assange himself counts as a journalist.