Friday’s case numbers come from more than 62,883 tests, and are a drop from Thursday’s record case load of 1438. 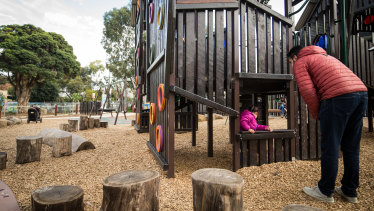 Childcare centres in Victoria continue to be listed as COVID-19 exposure sites.Credit:Darrian Traynor

More than 34,935 Victorians rolled up their sleeves to get a dose of a COVID-19 vaccine on Thursday; the day the state reached its milestone of 80 per cent of the population vaccinated with one dose.

A general practice in Melbourne’s east, Deepdene Surgery, was on Thursday forced to apologise to patients after a Pfizer vaccine mix up meant 30 people “may or may not have received the vaccine”.

The mistake, which happened because empty vials were used for preparing some vaccine syringes, meant some people were injected with saline, a salt solution, rather than the Pfizer vaccine.

“The saline did not contain any vaccines or drugs. An injection of saline does not cause any harm,” the surgery said in a statement on its website.

The surgery said the mistake only affected people who came to get vaccinated on Sunday, September 26 at 1pm and 1.30pm, and it was following advice from Victoria’s vaccine safety surveillance service.

In the north west, Great Beginnings Taylors Take at Keilor was declared tier-1 over three days between 8am and 5.30pm: from Monday, September 20, through to Wednesday, September 22.

While Friday’s COVID-19 case numbers are a drop from Thursday’s, authorities have indicated Melbourne’s road out of lockdown might drag on longer if a surge in cases linked to illegal home gatherings and parties over the grand final long weekend becomes a trend.

Contact tracing interviews revealed about 500 of Thursday’s 1438 cases might have stemmed from gatherings on Friday and Saturday.

COVID-19 response commander Jeroen Weimar described the weekend’s rule-breaking as a city-wide super-spreading event that pushed the virus into new pockets of Melbourne. He said it could result in case numbers reaching the upper range of the Burnet Institute’s outbreak modelling, though one of the lead modellers cautioned against reading too much into one day’s data.

“Today is a significant setback in how we manage this outbreak,” Mr Weimar said. “If this trend is continued … we will jump to the worst quartile of those Burnet projections.”

Premier Daniel Andrews said the rule-breaking was understandable but inexcusable, affirming his intention to lift the lockdown. But he warned that if case numbers and hospitalisations continued to grow the easing of restrictions planned in late October might need to be postponed.

“We are not turning back. This is a plan to open … [and] we are finding a way to push through and get this place open,” he said.

“However, it would be irresponsible for me to say we wouldn’t, for instance, have to pause, we wouldn’t have to modify things.”

Mr Andrews also announced on Thursday that the gap between Pfizer vaccine doses at state-run clinics would be reduced back to three weeks from October 4 in a bid to speed up the vaccine rollout.

Health authorities had earlier extended the gap between doses to six weeks in a bid to boost the number of people with at least one dose of the vaccine.