Victorian health authorities are investigating a suspected case of the Omicron strain of coronavirus as the state recorded 1007 new cases and three deaths.

A positive COVID-19 case who arrived in Sydney from a country of concern visited Victoria for a short trip before returning to NSW. 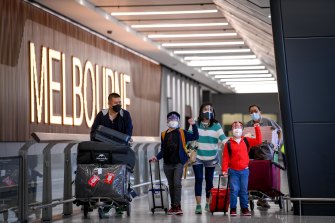 A Health Department spokesperson said on Sunday night that the person had been questioned and close contacts would be notified and provided with advice. So far, no returned travellers in Victoria from countries of concern have tested positive.

Mounting concern over the latest strain of the virus prompted Australian authorities to reintroduce a 72-hour isolation period for all international arrivals. State authorities are now considering bringing back a quarantine period of 14 days for all arrivals.

But this has caused anxiety for Victorians now in overseas countries.

Stephen Massa was sent to Papua New Guinea on a business trip. He said he was distressed by the thought of having to endure a longer quarantine and being unable to see his wife, Sandra, and two children, Valentina and Christian, for even longer.

“I’m concerned it could change, it’s very much a developing situation. I just want to get back to Australia,” he said as he waited for his delayed flight at Jacksons International Airport in Port Moresby.

“I was going to arrive back Monday morning and go straight home to my family, but now we’ve got the 72-hour isolation. I can’t isolate at home because I’ve got two young children and my wife there, and all I want to do is kiss and cuddle them,” he said.

“I’m just keen to get home because there are very [few] flights into Sydney from Port Moresby, and they’re all booked. If I miss this flight now, I will not get out before Christmas.”

With only 2 per cent of people in Papua New Guinea fully vaccinated, Mr Massa said he feared the Omicron variant could ravage the country’s residents if it did prove to be more transmissible than the Delta strain.

The same early data suggested that Omicron was probably more transmissible but may be no more vaccine-resistant than other strains, Professor Kelly said.

Prime Minister Scott Morrison has called an emergency national cabinet meeting, expected to be held within the next 48 hours, so that state, territory and federal leaders could discuss the new Omicron coronavirus variant.

Dr Angelique Coetzee, the chairwoman of the South African Medical Association who sounded the alarm about the new strain, said it would be another seven to 14 days before it was clear if the strain led to severe illness.

She said while the strain may well be more infectious than Delta, they were not yet seeing any patients with severe symptoms. With her patients now coming up to two weeks since they were first symptomatic, Dr Coetzee said it would soon be clear if Omicron resulted in serious illness.

“We are looking at severity. For us, it will be very important if we start seeing severe patients admitted to hospital,” she said.

“We’re praying that the clinical picture stays at what we’re currently seeing.”

More than 48,397 test results were processed on Sunday, while 1813 doses of vaccine were administered in state-run hubs. There are now 11,501 active cases of the virus in Victoria.