VOLCANIC eruptions in Italy and Greece could trigger tsunamis that cripple world trade.

Experts fear minor blasts at Vesuvius and Santorini could be just as if not more dangerous than colossal explosions, "cascading" to global catastrophe. 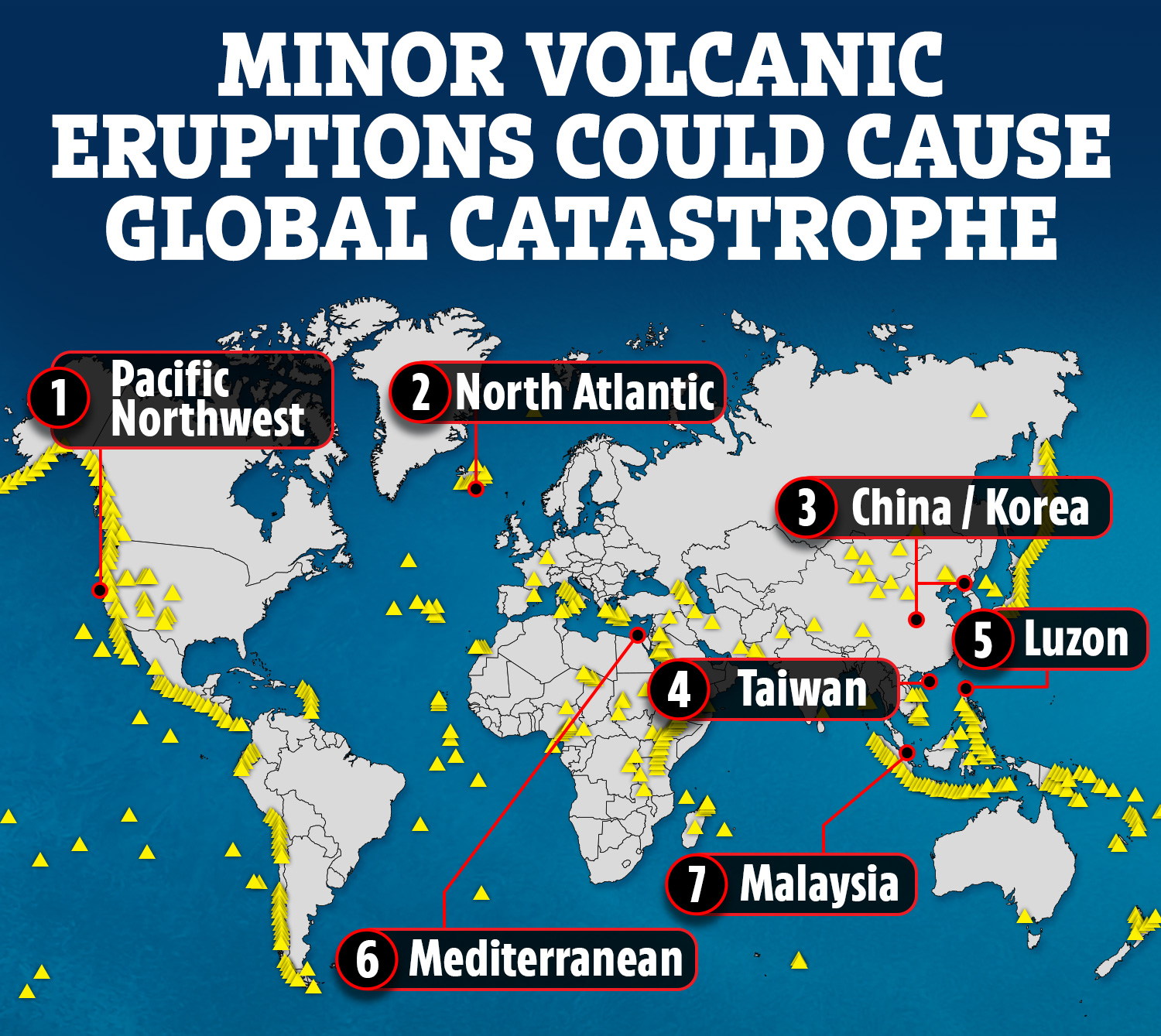 Mammoth waves could smash submerged cable networks and even seal off the Suez Canal, according to a new study.

Experts at Cambridge University warn relatively small but active volcanoes could paralyse vital infrastructure and spark a "domino effect" around the world.

They have identified seven "pinch points" where clusters of these volcanoes sit alongside infrastructure critical for the functioning of society and the economy.

These regions include northwestern United States, Taiwan, North Africa and the North Atlantic.

The volcanic group on the northern tip of Taiwan could cause the global tech industry to grind to a halt.

It is home to one of the largest producers of electronic chips, as well as the Port of Taipei.

Another pinch point is the Mediterranean where legends of the classical world such as Vesuvius and Santorini could induce tsunamis.

These eruptions could not only destroy submerged cable networks but even blockade the Suez Canal – a vital shipping route in Egypt.

Dr Lara Mani, from the Centre for the Study of Existential Risk (CSER), said: "We saw what a six-day closure to the Suez Canal did earlier this year, when a single stuck container ship cost up to ten billion dollars a week in global trade."

Eruptions in the US state of Washington in the Pacific Northwest could trigger mudflows and ash clouds that blanket Seattle, shutting down airports and seaports.

Also, highly active volcanic centres along the Indonesian archipelago, from Sumatra to Central Java, line the Strait of Malacca – one of the busiest shipping passages in the world, with 40 per cent of global trade traversing the narrow route each year.

Another key shipping route, the Luzon Strait in the South China Sea, is encircled by the Luzon Volcanic Arc.

It is the crux of all the major submerged cabling that connects China, Hong Kong, Taiwan, Japan and South Korea.

Even a minor eruption in one of the areas we identify could erupt enough ash or generate large enough tremors to disrupt networks that are central to global supply chains and financial systems.

Plumes of ash would disrupt the busiest air routes in the east, and a reawakening of Icelandic volcanoes would do the same in the west.

A magnitude four eruption from the Eyjafjallajökull volcano in Iceland in 2010 saw ash carried on northwesterly winds close European airspace, grounding flights and causing a loss of $5billion to the global economy.

When Mount Pinatubo in the Philippines erupted in 1991, a magnitude six eruption – some 100 times bigger than in Iceland – its distance from vital infrastructure meant that economic damage was less than a fifth as bad.

Dr Mani said: "Even a minor eruption in one of the areas we identify could erupt enough ash or generate large enough tremors to disrupt networks that are central to global supply chains and financial systems.

"At the moment, calculations are too skewed towards giant explosions or nightmare scenarios, when the more likely risks come from moderate events that disable major international communications, trade networks or transport hubs.

"This is true of earthquakes and extreme weather as well as volcanic eruption."

Dr Mani and her colleagues said smaller eruptions, ranking up to six on the "volcanic explosivity index" – rather than the sevens and eights that tend to occupy catastrophist thinking, could be some of the worst.

"We need to move away from thinking in terms of colossal eruptions destroying the world, as portrayed in Hollywood films.

"The more probable scenarios involve lower-magnitude eruptions interacting with our societal vulnerabilities and cascading us towards catastrophe."

The study was published in the journal Nature Communications.