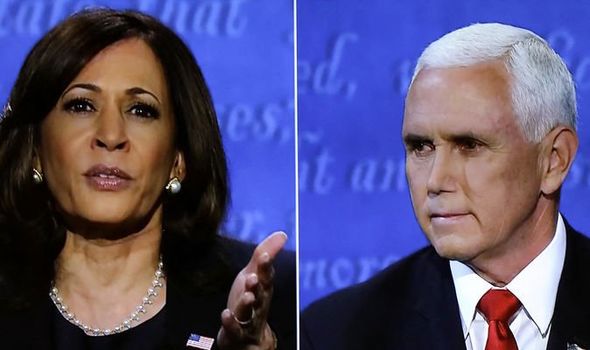 Susan Page, moderator for the vice presidential debate, was forced to step in as Ms Harris and Mr Pence began speaking over each other. The messy scenes were reminiscent of last week’s presidential debate between Donald Trump and Joe Biden, which was widely criticised for its failure to stick to time.

Ms Page took the nominees to task halfway through the debate for the pairs failure to keep to their speaking times.


She stepped in to admonish Mr Pence and Ms Harris after the Vice President spoke over the Democrat.


The moderator then said: “I did not create the rules for tonight.


“Your campaigns agreed to the rules for tonight’s debate with the Commission on Presidential Debates.


“I am here to enforce them, which involves moving from one topic to another, giving roughly equal time to both of you, which is what I’m trying very hard to do.”

END_OF_DOCUMENT_TOKEN_TO_BE_REPLACED

END_OF_DOCUMENT_TOKEN_TO_BE_REPLACED
Recent Posts
We and our partners use cookies on this site to improve our service, perform analytics, personalize advertising, measure advertising performance, and remember website preferences.Ok