Home » World News » Wallace: Drive Putin out of Ukraine like a ‘limpet off the rock’

Wallace: Drive Putin out of Ukraine like a ‘limpet off the rock’ 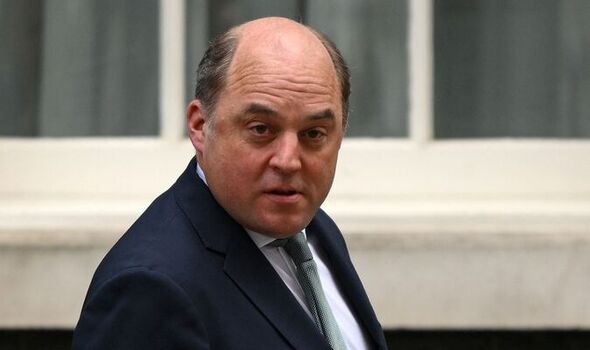 A day after the Russian despot said he was prepared to use nuclear weapons against anyone who interfered, Mr Wallace said: “Putin, having failed in nearly all his objectives, may seek to consolidate what he’s got, sort of fortify and dig in, as he did in 2014, and just be a sort of cancerous growth within the country of Ukraine and make it very hard for people to move out… of those fortified positions.

“If we want this to not happen, we have to help Ukrainians effectively get the limpet off the rock and keep the momentum pushing [Russia] back.” On the day the first

Briton was confirmed to have been killed in the conflict, Mr Wallace also announced that around 8,000 troops from the British Army will conduct exercises across Europe this summer – in one of the largest deployments since the ColdWar.

Some 72 Challenger 2 tanks, 12 AS90 tracked artillery guns and 120 Warrior armoured fighting vehicles will be deployed to countries from Finland to North Macedonia.

Tens of thousands of troops from Nato and Joint Expeditionary Force allies are involved in the exercises. Meanwhile, the Kremlin warned yesterday that sending heavy weapons to Ukraine threatened security in Europe.

But Mr Wallace said the British public should not be “too alarmed” by the Russian president’s threat that countries intervening in the Ukraine war will be met with a “lightning fast” response.

He said Putin had made similar comments before and was trying to “lay the groundwork” for an announcement to “cover his failure”.

Mr Wallace said: “He’s going to have to admit if he wants to mobilise more of the Russian people, that it is a war.

“He’s going to have to admit it by trying to blame everybody else, I think that is what he was rolling the pitch for.” However, Nato takes Mr Putin’s comments “incredibly seriously”, Mr Wallace added.

He said: “But we also must not let ourselves be intimidated from defending Ukraine and protecting the people from brutality.”

“We’ve constantly said that Russia should leave Ukraine sovereign territory, so that hasn’t changed.” The Defence Secretary also said: “There’s a long way to go before Ukraine pushes into Crimea.

“I think what I would certainly say is, we are supporting Ukraine’s sovereign integrity.

“We’ve done that all along. That, of course, includes Crimea.

“But you know, first and foremost, let’s get Russia out of where they are now. The key thing is to continue to support Ukraine’s sovereign integrity and their ability to defend themselves.”

During a visit to Ukraine yesterday, UN secretary-general Antonio Guterres said that war in the 21st century was an “absurdity”.

He met Ukrainian President Zelensky after holding “frank” talks with Putin in Moscow.

Visiting the badly damaged city of Bucha near Kyiv, where bodies have been pictured lining the streets, the UN chief said: “War is evil.

“Here you feel how important it is for a thorough investigation and accountability.

“I fully support the International Criminal Court and appeal to the Russian Federation to accept to cooperate with it.

“But when we talk of war crimes we cannot forget that the worst of crimes is war itself.”

Meanwhile, Mr Wallace clarified that the long-range Brimstone missiles the UK is sending to Ukraine “will be used over the ground”, but that Britain is also examining an anti-ship missile solution. He added that it was “incredibly important” that grain (for food) “does get out of Ukraine, that the Russians can’t control the Black Sea”. He said Russian ships must not be allowed to bombard cities. The Defence Secretary added that Britain stands ready to send more weapons if needed.

“Contrary to Putin’s claims, this is not a Nato effort,” he said.

“These countries including Britain – there are nearly 40 of them now helping Ukraine – are doing so through bilateral arrangements because they want to stand up for the values that we think are most important.

“But if Putin continues to inflict what clearly are war crimes and indiscriminate bombing, and the Ukrainians need further defence, we will consider that and supply it or help supply it.”