When Wayne Laver walked into the Police Depot as a 16-year-old cadet, decimal currency was three weeks old, Nancy Sinatra had the number one single, Harold Holt was Prime Minister and Prince Charles was the new boy at Geelong Grammar’s Timbertop. 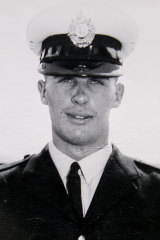 Wayne Laver as a young cop.

It was March 7, 1966. That was 15 prime ministers, 11 premiers and 11 chief commissioners ago. Ronald Ryan’s murder trial was about to begin, resulting in him being the last man hanged in Australia, and colour television was nearly 10 years away.

Just weeks earlier the notorious early pub closing – known as the six o’clock swill – was finally overturned. Melbourne closed on Sundays, Chinese takeaway was served in saucepans and the Coles Cafeteria was considered a special day out.

On Friday, Detective Senior Sergeant Laver will walk out of the depot’s successor, the Police Academy, retiring after an astonishing 55 years’ service. His lasting legacy will be that there is hardly a detective in the state who hasn’t learned the caper from the man they call “Wally”.

Wayne is about to turn 72, the recipient of the Australia Police Medal and the third longest-serving police officer: “I’m happy to be on the podium with the bronze.”

Not that long ago the mandatory retirement age for police was 60, which means Wayne managed another dozen years in the job he loves.

Back as a Moorabbin schoolkid he expected to find a secure job in a bank until his father suggested policing might be a little more rewarding and a touch more exciting. He was right; it’s much more fun to chase those who rob banks than to work in one.

He was accepted as a cadet out of year 10 and spent the next 18 months learning the basics of street policing, running the Botanical Gardens’ Tan Track and being terrified by the drill sergeant.

Graduating in March 1968, his squad jumped on a tram to Lonsdale Street and then marched to Russell Street Police Headquarters. After a quick look around, he was given his first briefing: “OK son you’re a copper now, go out and do it.” He was 18 years old.

Laver may have been trained in a black-and-white world but he soon learned that life is every shade of grey.

On solo foot patrol his first arrest was in Bourke Street for drunk and disorderly. The offender and the young cop had to walk (the cop) and stagger (the offender) back to Russell Street. 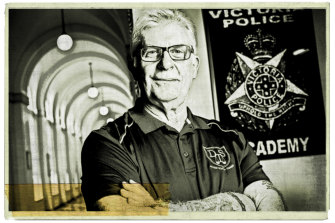 Wayne Laver: Retiring after 55 years in The Job.Credit:Eddie Jim

Early this year public drunkenness was abolished as an offence. “I think they have jumped the gun there. We have been able to take street people out of the weather and at least give them breakfast. It is not ideal but it is better than nothing,” he says.

Laver progressed through uniform into the crime department and then the Bureau of Criminal Intelligence, where he was assigned to look for dangerous escapees. The most dangerous of the time was Brian Leslie O’Callaghan, a former member of the notorious Kangaroo Gang, accomplished armed robber and associate of the Great Bookie Robbery team.

In 1977 Laver and his partner, Paul “Buck” Higgins, headed to a Carlton house to talk to one of escapee O’Callaghan’s friends on the off chance they could pick up his trail.

“There was a party going on and we were waved in because they thought we were friends. We walked down a long corridor and then I heard Paul say, ‘G’day Brian’. It was a welcome back party for O’Callaghan.”

O’Callaghan went for his gun as Higgins went for the gunman. The policeman grabbed the crook’s right hand, holding a .357 magnum revolver, and thrust it into the air.

Higgins was a former police heavyweight boxing champion. He managed to knock the gun from O’Callaghan’s hand. 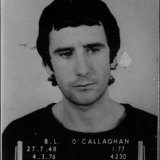 “The gun hit the floor and was kicked down the corridor. I couldn’t bend to pick it up because I thought I’d be punched in the back of the head. I got my gun out and started fanning it at the crowd to keep them back.

“One bloke started coming for me. I pointed the gun at his chest and said ‘Take one more step and I’ll shoot you’.”

They dragged the escapee into their car, still keeping the crowd at bay at gunpoint.

Years later, Laver saw O’Callaghan at the Fitzroy Police Station and popped over to say hello. O’Callaghan said: “You are one of two very lucky coppers. If we had overpowered you we would have necked you and dumped you in the bush.”

“Brian always had a smile on his face,” says Laver.

Like so many of his peers, O’Callaghan was released from prison only to be imprisoned by his drug habit. It would eventually cost him his life.

Laver worked homicide for years, seeing terrible mass shootings such as the Hoddle and Queen street massacres. But like so many investigators, there is one crime that haunts him.

It didn’t create many headlines, as there was no mystery. “We got the crook the next day.” He confessed and was sentenced to 17 years with a minimum of 13.

The victim was a little girl, just 11 years old. “She was stabbed 169 times. They were horrific wounds. She was found by her mum, it was awful,” says Laver as he blinks back tears thinking of a case that is now more than 30 years old.

Even now when Laver is anywhere near Kyneton he will stop at the grave to leave flowers and pay his respects. “You see the headstones and the ages: sixties, seventies, eighties and even nineties. Then 11 years old.

“You can be sitting watching TV and you see something and bang, it hits you.”

As a young policeman Laver learned there was more to policing than doing: to be a real team player you needed to be able to teach as well.

“There was a case when as a junior I mucked up big time. I was taken into the muster room and they gave it to me. I deserved it. I deserved it because I didn’t do the job.”

But there was something missing: “I was told what I did wrong but I wasn’t told what I should have done.”

It would have ended there, except for a detective sergeant who walked by and heard the blast. “He called me in and spent an hour explaining what I should have done. It stayed with me and I thought ‘that’s what I want to do’.”

More than 20 years ago he went to Detective Training School as an instructor and has stayed ever since: “I think I have taught a couple of thousand detectives.

“I tell them to enjoy the journey and to be the best you can be.

“You can never think you know everything. You never stop learning.” 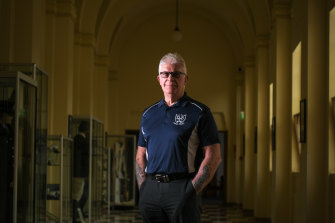 How things have changed. Detective Senior Sergeant Wayne Laver at the Police Academy with his hands in his pockets. When he joined 55 years ago the punishment would have been 20 push-ups.Credit:Eddie Jim

The movies are full of Sherlock Holmes moments where the detective uses almost superhuman deductive powers to solve the most baffling crimes in between ads for dating sites, ab blasters and automatic vacuum cleaners.

The truth is much simpler: Learn to read people, don’t play the tough guy and treat victims, witnesses and suspects with respect.

The best detectives have three basic characteristics: curiosity, a sense of justice and empathy.

Laver learned in the early days to talk to crooks. If he saw an offender in a court he would go over for a chat.

“Some other coppers would ask ‘Why would you want to talk to him?’. I would say ‘you would be surprised what people will say when you talk to them’.”

This doesn’t mean Laver is the Oprah Winfrey of policing.

“I tell every detective investigating a crime to do the best they can. Imagine the victim is one of your family. What sort of investigation would you hope they would be given?”

When he began, confessions were typed (when submitted unsigned that could suggest fabrication) and police were nearly always believed in court.

Now police have more tools than ever before: DNA technology, phone taps (legal ones that is), CCTV, phone towers, credit card and toll road records.

But Laver says policing is a tougher game now. “The respect between crooks and cops has mostly gone. Back then no one would deliberately try and ram a police car or run you down.”

When Laver leaves the Academy on Friday he knows that in every major police station in the state detectives investigating everything from murder to theft of motor cars have learnt from him.

“I hope I have made a little bit of a difference.”

You did Wally. You did.