‘We can’t go back home’: Families and businesses hurt by border closures

Within hours of having a caesarean and discovering her baby had been born without an oesophagus, Christine Stoove and her husband were left at the mercy of the Queensland border closure.

Newborn Joey Tornatora was rushed by ambulance from the Tweed Hospital in northern NSW to the Mater Hospital in Brisbane the day after he was born on August 19. His father Mario Tornatora had to jump through bureaucratic hoops just to see him. 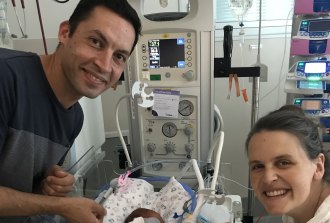 Responding to a question about family separation between the two states, NSW Health Minister Brad Hazzard on Wednesday launched a scathing attack at Queensland Premier Annastacia Palaszczuk and her government's border policy.

"I can only express my anger, my supreme anger, at the Queensland Premier's decision which, in my view, broadly across the border currently is nothing more than base, loopy politics," Mr Hazzard said. "I'm appalled by what's going on up there." 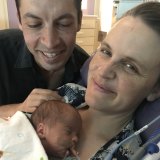 After arriving in Brisbane, Mr Tornatora was quarantined in hospital with his wife. Their baby, who needed 24-hour nursing care, went into emergency surgery the day after he was born and the family needs to stay in Queensland for five months, with the help of online fund raising, until he has a second operation.

"We can't go back home to get our stuff, so we are basically living hand to mouth, camping for the forseeable future at Ronald McDonald House," Ms Stoove said.

"We only have the very small bag of belongings that Mario packed, including random clothes that I've never worn before.

"I have very scant emotional resources to apply for another exemption to go and pick up our belongings from home in Murwillumbah."

Half of his employees are in Queensland and the other half are in NSW and all are outside the "border bubble", but they need to cross the border eight to 15 times a week to transport explosives for the business to survive.

He said his NSW workers can provide a service to Queensland, but they are not allowed to cross the border "because it doesn't benefit Queensland".

"It's insanity. They are happy for it to go one way but not the other way," he said.

"Nick's employees need to cross the border for his business to survive. Our region has no community transmission of the virus," Mr Hogan said.

"There is nothing but heartache and damage being done to families' health and livelihoods."

Premier Gladys Berejiklian said she couldn't understand why some states still had their borders closed.

"I just don't understand this position when we're doing well in managing the virus, we're trying to keep jobs and the economy going, we're doing the heavy lifting in terms of welcoming back Australians," Ms Berejiklian said

"Our nation needs to deal with the pandemic … we're Australians as well as living in NSW and a lot of families aren't able to see each other."

"We won't be lectured to by NSW, they were the ones saying 'open the borders' relentlessly and then there was a second wave," Mr Bailey said.

Brad Jones from Goonellabah in northern NSW has been in a battle to see his four-year-old daughter Charlotte Jones, who has leukaemia and is fighting for her life in the Queensland Children's Hospital. Mr Jones told the ABC he had to reapply for an exemption to see her for two hours, without having to quarantine for 14 days.

Despite Prime Minister Scott Morrison describing NSW's contact tracing strategy as the "gold standard" of COVID-19 suppression, Ms Berejiklian on Wednesday stressed it was only partly responsible. It required the support of all government agencies.

"Unless you have a whole of governance approach to managing the pandemic, the contact tracing isn't as effective and I really want to make that clear," she said.

END_OF_DOCUMENT_TOKEN_TO_BE_REPLACED

END_OF_DOCUMENT_TOKEN_TO_BE_REPLACED
Recent Posts
We and our partners use cookies on this site to improve our service, perform analytics, personalize advertising, measure advertising performance, and remember website preferences.Ok