'We're behind you England!' Boris Johnson voices his support

‘We’re behind you England!’ Boris Johnson voices his support as he heads to the match against Denmark with wife Carrie

The Prime Minister and his wife are cheering on England as they face off against Denmark tonight.

Boris and Carrie Johnson are backing the Three Lions at Wembley as the team try to seal a place in Sunday’s final against Italy.

It would be the squad’s biggest football game since the historic 1966 World Cup victory.

Thousands of England football fans had chanted ‘It’s Coming Home’ outside Wembley Stadium for up to eight hours ahead of the semi-final match against Denmark.

Gareth Southgate’s squad are facing off against the Danes at 8pm, with an estimated 30 million people tuning in to watch the showdown on TV and 60,000 packing out the home of English football for the game.

The Prime Minister today tweeted ‘We’re behind you England!’ and posted a picture of himself wearing a shirt with the name ‘Boris’ and a number 10 emblazoned on the back as he gets into the back of a car.

He and his wife Carrie are in the crowd at Wembley cheering on England tonight.

The couple had previously been pictured cheering on England against Germany on June 29. 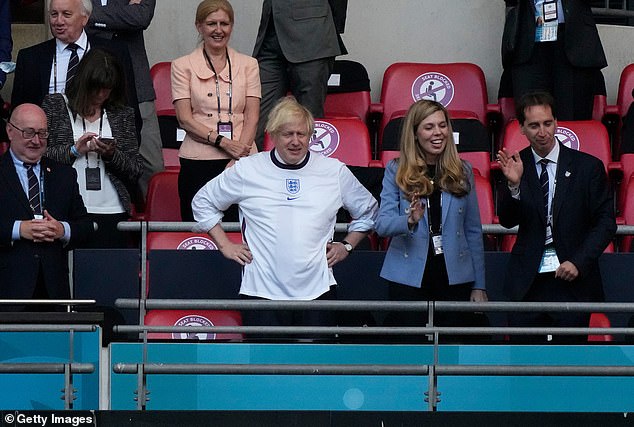 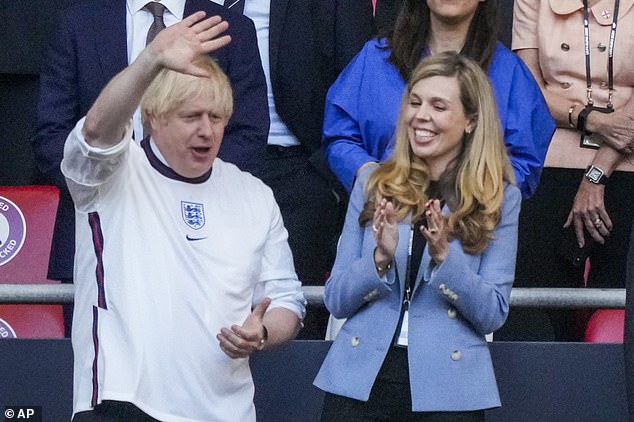 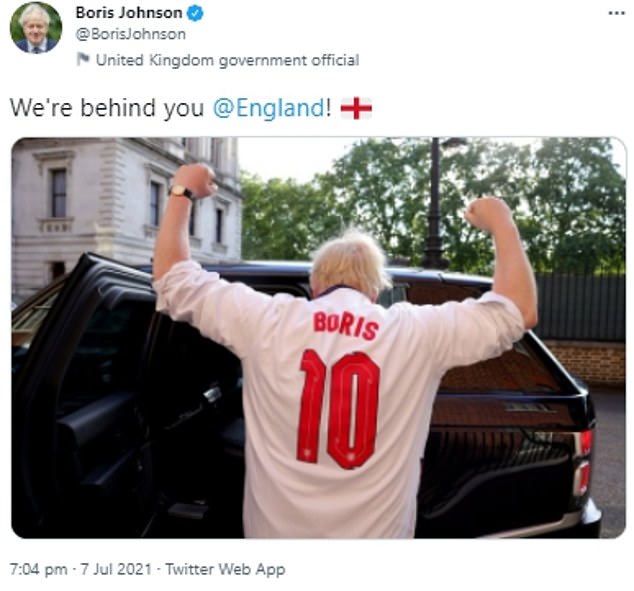 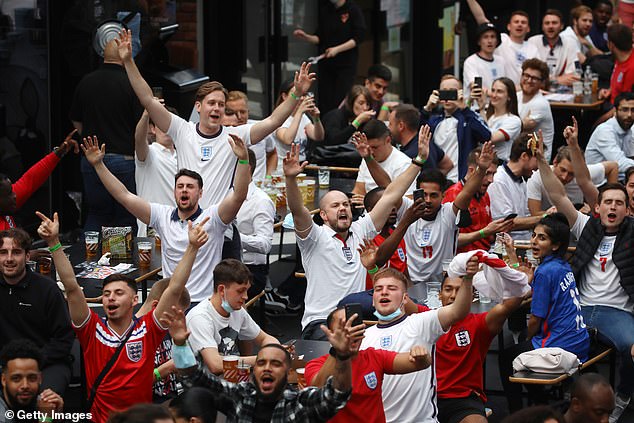 Wembley was today awash with red, white and blue, with onlookers describing scenes of ‘carnage’ with huge numbers of England fans sing ‘It’s Coming Home’ and ‘God Save the Queen’.

There has been more expectation on England in the European Championship this summer than when they went on a surprise run to the last four of the 2018 World Cup, and they have thus far risen to the challenge.

England are yet to concede a goal in the tournament and, having dispatched Germany in the last-16 and Ukraine in the quarter-finals, hopes are high heading into Wednesday evening’s clash against the Danes at Wembley.

While Gary Neville says he has ‘genuine confidence in this manager and players’, the former England and Manchester United defender insisted nothing less than their best display will be enough to carry them into Sunday’s showpiece.

Just hours before kick-off, Neville wrote on Instagram: ‘History beckons for this team. To reach back-to-back Semi-Finals is incredible, but it’s not enough. You become nearly men!

‘I do have genuine confidence in this manager and players that this time a semi-final isn’t the end! To win any semi-final takes a great performance. This is a really good Denmark team and anything less than our best and/or luck will not be enough. 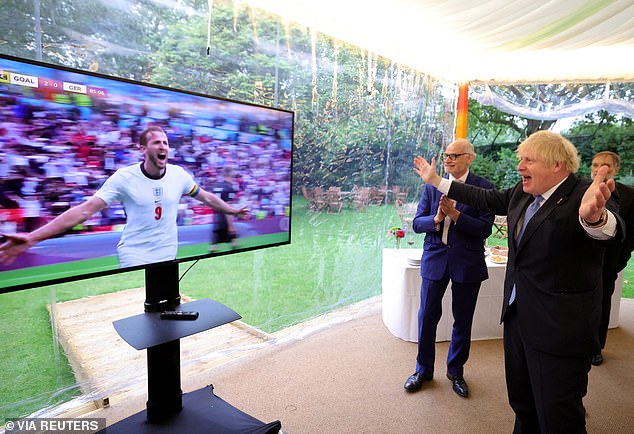 Boris Johnson reacts as England score against Germany on June 29 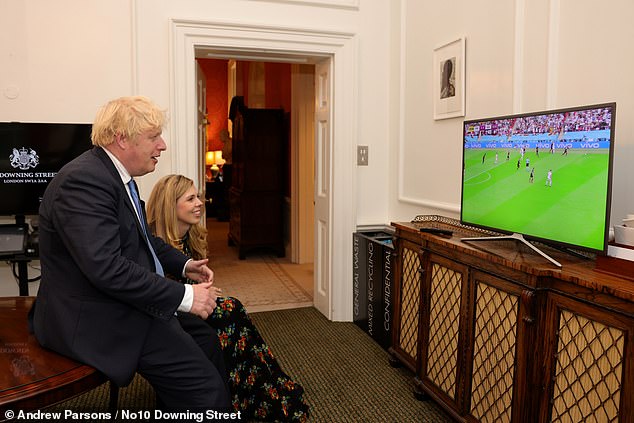 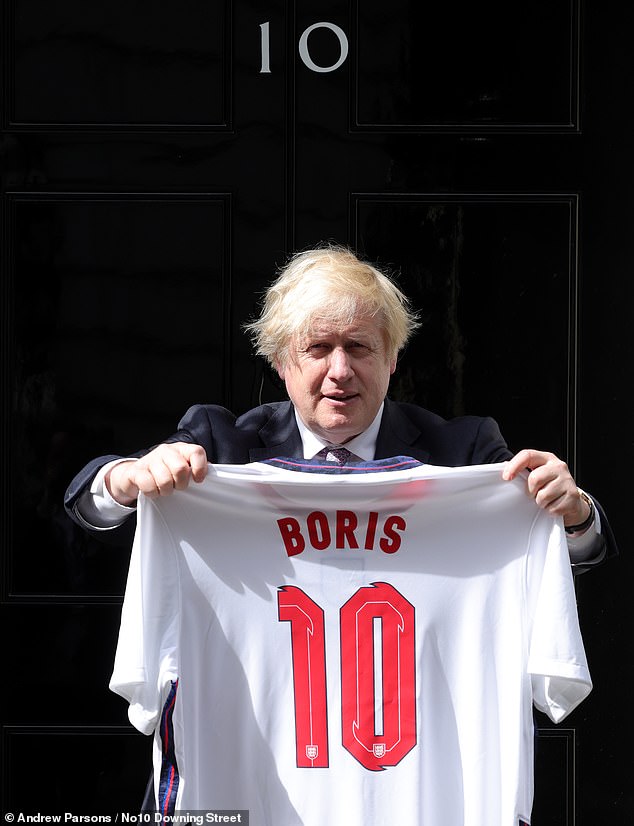 Boris Johnson shows his support for England outside Downing Street

‘The only danger is that the lads don’t see the danger. When you’re euphoric and on a wave in sport or life you can have that feeling it’s never going to end and something becomes your right. It doesn’t work like that.

‘Tonight is a night to be cold, don’t let emotion take over, stick to the manager’s plan and focus. Go for it lads! Focus and grab this chance!’

Neville was part of the England coaching staff in their last appearance at the European Championship when they were defeated by Iceland, working under Roy Hodgson, who believes the current crop have been ‘absolutely perfect’.

‘I’m very confident indeed because I think the England team is playing so exceptionally well from the start of the tournament really,’ he told ITV’s Good Morning Britain.

‘In fact, they have been faultless. I can’t think of anything to criticise, although I’m sure there are people who do find something. But they must be hard pushed to find something. It’s been absolutely perfect.’

Hodgson said the Wembley crowd will ‘play a major part’ but is dreading the prospect of a penalty shoot-out.

‘My main hope tonight is that the game won’t go to penalties,’ he added. ‘You can argue that the penalty shoot-out is better than the flip of a coin, but it is a very cruel way to lose matches.’