Donald Trump has at last confirmed that he has been brief by the Pentagon on the existence of UFOs, following a surge in reported sightings.

The US leader told Good Morning America that he had been briefed on the surprise surge in Navy pilots  reporting sightings of unidentified flying objects.

However, much of the online reaction to the admission about UFOs concerned President Trump’s guarded response to the question. 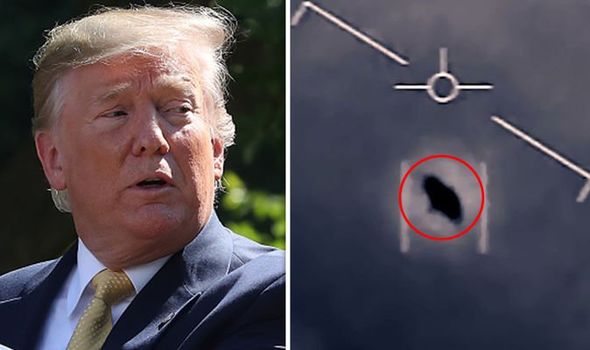 Reporter George Stephanopoulos asked him: “I was struck in the last few couple of weeks, we’re reading more and more reports of Navy pilots seeing lots and lots of UFOs.

“Have you been briefed on that? What do you make of it?”

The US President responded:   “Yeah, I have, I have. I want them to think whatever they think.

“They do say, I mean, I’ve seen, and I’ve read, and I’ve heard, and I did have one very brief meeting on it, but people are saying they’re seeing UFOs.

“Do I believe it? Not particularly.”

I did have one very brief meeting on it. But people are saying they’re seeing UFOs

Stephanopoulos followed up with a question about whether Mr Trump would know if there was evidence of alien life.

He said: “Well I think my, our great pilots would know, and some of them really see things that are a little bit different than in the past.

“So we’re gonna see. But we’ll watch it and you’re gonna be the first to know.”

Despite the scepticism, online viewers noticed that Donald Trump’s facial smirks and unusual hesitation in responding meant he knew more than he was letting on.

Viewers also noted that the US President didn’t appear to directly answer the question about proof of extraterrestial life.

This sparked an online frenzy that the global leader knew more than he was revealing.

This comes after the Navy recently announced it would update guidelines for how its pilots report “unidentified aircraft” in response to reports of strange sightings.

The Navy acknowledged a “number of reports of unauthorized and/or unidentified aircraft entering various military-controlled ranges and designated air space in recent years.”