Whispers, betrayal and rebellion: Britain more divided than ever

London: “I did nothing except Latin and Greek for about 20 years and now I'm running the country,” British Prime Minister Boris Johnson told schoolchildren on Tuesday.

This was meant to encourage them. They can be forgiven for not feeling encouraged. 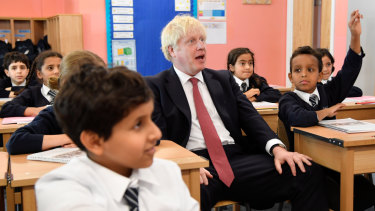 It's going to take more than the proven ability to recite from memory the Iliad in Homeric Greek to fix this crazy, crazed country.

The UK is more polarised and divided than it has been in decades, perhaps centuries. Its politicians, media and people have almost stopped arguing. They live on different timelines telling different stories and assessing different facts, on their way to different futures, apparently unaware that one or both are fantasies.

With Parliament suspended and the party political convention season upon us, the country has plunged into a phoney election campaign in a black mood.

At a wedding on Saturday in a most English of English towns, I spoke to a couple about Brexit. But only because I was an Australian journalist.

The relief poured off them.

“We’re Leavers,” the wife whispered. “We can’t even mention this to most of the people here. We just can’t.”

So they just don't. They read Leaver newspapers and talked to other Leavers about Brexit, and the rest of the time it is off the agenda. Like they live in a different political world to some of their closest friends.

They aren't the only ones. 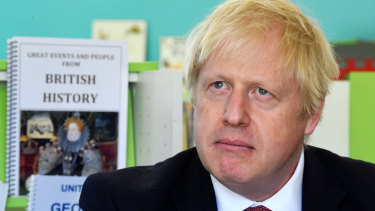 UK Prime Minister Boris Johnson told schoolchildren he “did nothing except Latin and Greek for about 20 years and now I’m running the country”.Credit:Getty Images

Many traditions of the Parliament in Westminster are frankly as dull as they are weird, from the tediously roundabout Victorian English and Norman French as the Queen assents to a law, through to senior officials in slow, solemn duties dressed like Blackadder.

But on Monday they told a story.

Parliament on Monday night saw the normally demob-happy custom of prorogation, when the Black Rod (an official named after a big ebony rod) goes from the Lords to the Commons and has the door slammed ceremonially slammed in her face.

MPs then file through to the Lords to hear the Queen’s representatives announce at length that Parliament is prorogued for a few days to reset the legislative agenda.

But only Conservatives made the trip on Monday night, for an extraordinary five-week prorogation arranged (it seems pretty obvious) by the government to stop Parliament interfering in Brexit, which it has been doing with increasing frequency in order to throw down new Brexit hurdles, never to present an alternative.

The Tories were led to the Lords by an unwilling Speaker of the Commons who had made it painfully clear he was doing so only because refusing would have been a breach of constitutional convention, his job KPIs and, even worse, bad manners.

Labour, the Scottish National Party and Plaid Cymru stayed put singing, respectively, The Red Flag (“cowards flinch and traitors sneer”), Scots Wha Hae (“wha sae base as be a slave”), and Calon Lan (“the rugby’s about to start”).

After prorogation in the Lords, MPs usually come back to the Commons to shake hands and head to the pub. This time no Tory returned. The Speaker and Opposition were left to stare at each other awkwardly, shrug and go home.

And that was it for this fractured Parliament, for parties literally no longer in the same room, no longer even mentioning the need to bring the country back together.

Words have been exchanged. Trust lies in tatters.

Conventions that have long kept this bootstrapped democracy of decent chaps running lie wrecked, or weaponised into the political equivalent of the last scene of Reservoir Dogs.

An election lies surely not far away and looms like a shadow over everything, even over Brexit, which is not a healthy order of priorities.

More than 35 MPs will not stand again, including many of the former moderate “one nation” Conservatives ousted by their more doctrinal Brexit colleagues. Labour has seen its own defections over the leadership and alleged anti-Semitism.

Centrists on both sides will be replaced by more extreme candidates. The Conservatives will start 35 seats short of a majority and desperate to eviscerate Nigel Farage’s Brexit Party: exploiting rather than soothing Brexiter anger is their existential challenge.

But Downing Street doesn’t know if it will work well enough, despite the charisma and energy of the Prime Minister. Their polls tell the same story as everyone else’s: this is too close to call and could end up with another deadlocked Parliament or a majority for either side.

Labour, meanwhile, has a position on Brexit that may have internal logic but sounds utterly ludicrous: it wants to win power, delay Brexit, get a new Brexit deal, then hold a referendum and campaign against its own deal. Good luck selling that.

Opposition Leader Jeremy Corbyn, whose obvious desire to be talking about anything other than Brexit will make it hard to engage with an election campaign where nobody will talk about anything else.

On one flank Labour will have to defend old northern strongholds, now Brexit central, and on the other stem defections to the Liberal Democrats, who have the benefit of a crystal clear platform: Item 1, stop Brexit, Item 2, avoid at all costs talking about the real prospect of having to prop up a Corbyn minority government in order to stop Brexit.

There are unpleasant risks to a “Corbyn’s surrender vs Johnson’s coup” election. Just before the Brexit referendum an extremist further radicalised by the febrile atmosphere killed an MP. There are real fears it could happen again.

And petrol bombs are going off in Northern Ireland again, a reminder that peace on this island cannot be taken for granted, and Brexit has transformed usually-stultifying trade policy into a hand grenade with the pin pulled out.

And, though the election campaign more or less starts now, the vote itself will take place in an utterly unknowable time.

Will Johnson have done a Brexit deal, and if so will Brexiters love it or hate it? Will he have engineered a no-deal Brexit, and if so will it be an immediate disaster or slow economic puncture? Will he or his government have been forced into delaying Brexit again, and if so whom will the country blame: Corbyn, Johnson, or everyone?

And these are the known unknowns. With Brexit, you start the day with big problems and end the day with bigger, completely different problems. Scottish independence? Irish reunification? Sure, why not?

END_OF_DOCUMENT_TOKEN_TO_BE_REPLACED

END_OF_DOCUMENT_TOKEN_TO_BE_REPLACED
Recent Posts
We and our partners use cookies on this site to improve our service, perform analytics, personalize advertising, measure advertising performance, and remember website preferences.Ok