Home » World News » Why ‘him’? Student’s quest to scratch ‘he’ from the letter of the law

Why ‘him’? Student’s quest to scratch ‘he’ from the letter of the law

A campaign by a 23-year-old law student to have the wording of all Victorian legislation amended to make it gender neutral has gathered support from senior legal, human rights and gender-equality figures in the state.

Bonnie Logan, a Monash University student, has asked to meet Victorian Attorney-General Jaclyn Symes to discuss her view that the word “he” – which is used to signify all genders – should be replaced in all legislation by “the person” or “they”. 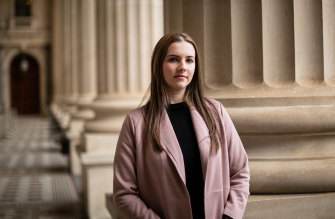 Bonnie Logan wants “he” replaced with “the person” or “they” in all Victorian legislation.Credit:Scott McNaughton

Leaders at the Law Institute of Victoria, the Victorian Equal Opportunity and Human Rights Commission and the Commission for Gender Equality in the Public Sector have all voiced support for change to make the language of the law inclusive of all genders.

“It has bugged me the whole way along,” Ms Logan said. “You’re sitting there studying and it’s ‘he’ this and ‘he’ that: ‘The police officer, if he believes etc.’ It’s an easy thing to change this; it would require one bill.

“We can’t expect to shift attitudes and beliefs if one of the most important texts within our society is gender-specific. It is important to recognise the power of language. In this context, it confirms the problematic notion that ‘he’ is the norm, and we have to work around that or apply special interpretation to be considered.”

Her attempts to secure a meeting with the Attorney-General had not received a response, so she started a public petition.

A spokeswoman for Ms Symes said the minister planned to respond and that Ms Logan may be offered a meeting with the Attorney-General or her advisers. 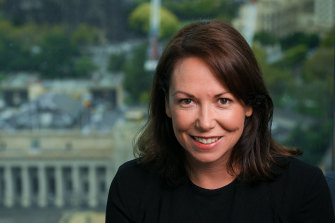 Attorney-General Jaclyn Symes said the government would continue to look at ways to modernise the justice system to make it inclusive.Credit:Eddie Jim

“We know how important it is to use inclusive language in all aspects of work and life. That’s why we’ve made it a standard practice for many years to use gender-neutral language when drafting legislation and amendments,” Ms Symes said.

“We will continue to look at ways to modernise our legislation and justice system to ensure it is inclusive for all Victorians regardless of their gender.”

Ms Logan argues changing the use of “he” to represent all genders in older legislation would act as “a preventative measure against sexism, discrimination and gendered violence”.

Existing laws demand new legislation or amendments are written in gender-neutral terms, but she is campaigning for a requirement that all legislation is updated by an act of Parliament.

The Victorian Crimes Act repeatedly refers to police officers with the masculine pronoun, saying offenders can be apprehended if “he believes on reasonable grounds” that an offence has been committed.

Another example of masculine language can be found in the Sale of Land Act: “An arbitrator may if he thinks fit call in the aid of one or more assessors to assist him in determining any matter under this Act.“

Ms Logan has received information from the Office of the Chief Parliamentary Counsel saying “there are no practical limitations for Parliament on this issue” and “it is for the government to adopt and implement a policy removing masculine pronouns from Victorian legislation”.

She points out that “a jurisdiction like Canada did it in 1985. They brought in new drafting legislation provisions, but they also said let’s start revising our complete legislation and now it’s all gender neutral.” 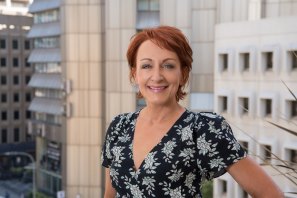 “People of all genders should feel included and respected. The ‘default male’ approach reflects the fact that most laws were written by men, just as most other systems and structures in our society were designed by men,” Dr Vincent said.

“While we still operate within these outdated structures, we need to recognise that they are no longer fit for purpose nor inclusive of 50 per cent of the population, and change is required to create a more fair and equal society.”

‘When you read that, there’s a sense that you’re missing from the picture, you don’t exist.’

Ro Allen, recently appointed to the Equal Opportunity and Human Rights Commission, said that given laws signify community values, they must be inclusive. “Laws are more than just the rules that guide our society; they capture our values too,” the commissioner said.

“So when masculine pronouns persist as the default in parts of our legislation, this perpetuates outdated hierarchies founded on inequality. Using gender-neutral language in our laws sends an important message to every member of our community – that they matter and that our laws exist to serve them.”

Tania Wolff, president of the Law Institute of Victoria, said the institute supports reform that results in gender equality in the legal profession and the community and backs the proposal.

“Our laws are a reflection of our community and our values. If amendments to legislation such as the use of non-gendered language can be made to reflect a fairer, more inclusive community, then that is a good thing and we wholeheartedly support it,” Ms Wolff said.

Monash University associate professor Becky Batagol said a provision in Victorian law was introduced in 1993, when then attorney-general Jan Wade, “made it clear in Parliament that the provision was put there so they didn’t need to change all Victorian legislation to be more inclusive”.

La Trobe University’s law school dean, Professor Fiona Kelly, said legislation using the male pronoun could make women feel excluded and that “the first thing it does is tells women in their law school classes that the law is not willing to include them at the most basic level, which is at the legislative level”.

“When you read that, there’s a sense that you’re missing from the picture, you don’t exist.” She said legislation still relying on “he” to represent all genders was out of date and it was not uncommon to see interpretation acts say “where the male word is used it’s intended to mean both male and female, and we’re supposed to be satisfied with that”.

She said it “feels like a little bit of laziness” that older laws had not been updated with gender neutral language.