In the many text messages exchanged by Michelle Carter and her suicidal boyfriend – as they strained to understand "the worst pain" and discussed the best ways to die – one observation stands out for its recognition of all the two teenagers could not fathom.

"Sometimes things happen and we never have the answers why," Carter, then 17, mused to 18-year-old Conrad Roy III on a summer's day in 2014. 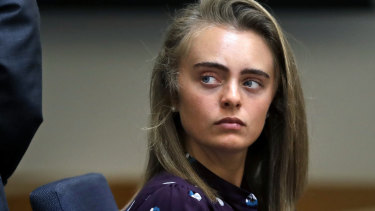 In a petition for Supreme Court review, filed on Monday, lawyers for the young woman are asking the justices to vacate Carter's conviction for involuntary manslaughter in the July 2014 death of Roy, who poisoned himself with carbon monoxide in a Kmart parking lot in Fairhaven, Massachusetts, after exchanging text messages and speaking twice on the phone with Carter on that summer day.

She lived about 50 miles away in Plainville.

Calling her conviction "unprecedented", the petition points to decisions in other states invalidating findings of culpability in cases of assisted suicide and cyber-stalking. It claims that Carter's right to free speech under the First Amendment shields her from criminal responsibility because her involvement was limited to "words alone".

The new chapter in the explosive case, which captured international attention, opened the same week that a documentary about the events, I Love You, Now Die: The Commonwealth v. Michelle Carter, airs on HBO.

The two-part film, which premiered at this year's South by Southwest Festival, examines the relationship between Carter and Roy, drawing on the thousands of text messages they exchanged over a two-year period, including missives that may have made sense fully only to them.

It goes inside the courtroom where Carter was tried under statutes whose framers never could have envisioned the digital platforms on which she conducted her relationship with Roy.

The two teenagers barely interacted in person. They led separate lives, both beset by difficulty, in separate Massachusetts towns. But they developed an intense online bond after meeting in Naples, Florida, in 2012, when each was visiting relatives.

They traded stories of their anguish, and Carter recommended that Roy seek treatment for his depression. 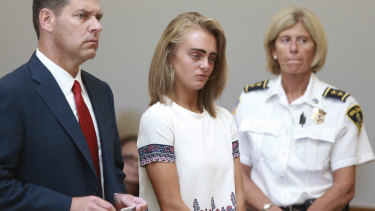 Michelle Carter listens to her sentencing for involuntary manslaughter in August 2017.Credit:Matt West

Soon, however, she began suggesting ways for her interlocutor to die by suicide, which he had previously attempted.

"Drink bleach. Why don't you just drink bleach?" she asked in messages recovered by investigators from Roy's phone.

"Hang yourself. Jump over a building, stab yourself, idk [I don't know]. There's a lot of ways."

The day before he was found lifeless in his truck, she had pressed him to follow through on his plans.

"If you want it as bad as you say you do, its [sic] time to do it today," she said in a text message the day before his death.

"I love you," she told him repeatedly, and he returned the words.

As his truck filled with fumes and he stepped outside, apparently having second thoughts, she instructed him to return to the vehicle, according to the juvenile court judge who convicted her of involuntary manslaughter in a nonjury trial in 2017. 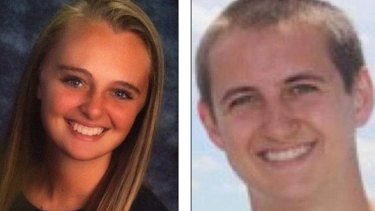 The judge, Lawrence Moniz of Bristol County, reasoned that her "virtual presence" made her responsible for her boyfriend's death. He later handed her a 15-month jail term.

Her conviction was upheld in February by the Massachusetts Supreme Judicial Court, which said it "rejected the defendant's claim that her words to the victim, without any physical act on her part and even without her physical presence at the scene, could not constitute wanton or reckless conduct sufficient to support a charge of manslaughter."

Carter began serving her sentence following the verdict from the state's highest court.

Profound constitutional and moral questions remain unanswered in the case, her lawyers maintain in their petition to the Supreme Court.

What is the relationship between speech and unlawful conduct?

Can one person cause another to die by suicide without physical participation?

What made Carter's acts distinct from assisted suicide?

Is "virtual presence" an oxymoron?

"This case, which garnered extensive public attention and media coverage around the globe, is an appropriate vehicle to address these important federal constitutional questions," the petition states.

As compelling as the questions may be, Eugene Volokh, a law professor at University of California, Los Angeles, and an authority on the First Amendment, said he did not expect the justices to take the case.

"The justices tend to look for questions on which there is a disagreement between lower courts, or for questions of real national importance," he said.

"This particular question, thankfully, comes up pretty rarely, so there hasn't been an opportunity for there to be a real disagreement."

He said it would be worth revisiting one of the main issues at stake in the case – an exception to First Amendment protections carved out by the Supreme Court in 1949 for "speech or writing used as an integral part of conduct in violation of a valid criminal statute".

Volokh had addressed the exception and the underlying case, Giboney v. Empire Storage & Ice Co., in multiple journal articles. Most recently, in 2016, he argued that curtailing expressive rights should be possible when speech "tends to cause, attempts to cause, or makes a threat to cause some illegal conduct". The scope of such restrictions, he added, must be narrow.

But he said the texting suicide case was likely too unusual a dispute to resolve the uncertainty surrounding how speech becomes implicated in criminal conduct.

If the Supreme Court decides not to review the case, the "impossible-to-resolve moral and legal conundrums" will still be litigated in the court of public opinion, said the journalist Jesse Barron, who is featured in the HBO documentary and who had covered the story for Esquire.

The documentary, he said, "gives Michelle Carter the jury she didn't have," since she waived her right to a trial by her peers.

Viewers will form their own judgments, arriving at the sort of answers that Carter told Roy proved elusive, and which the Supreme Court may choose not to provide.

END_OF_DOCUMENT_TOKEN_TO_BE_REPLACED

END_OF_DOCUMENT_TOKEN_TO_BE_REPLACED
Recent Posts
We and our partners use cookies on this site to improve our service, perform analytics, personalize advertising, measure advertising performance, and remember website preferences.Ok